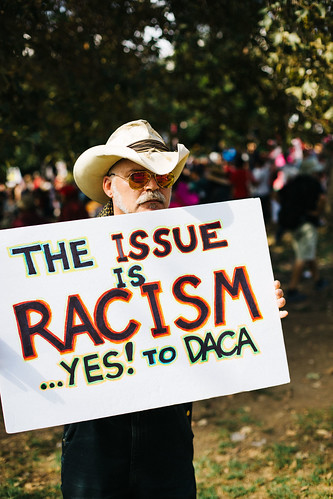 Several times in history great nations crippled or ended their development by expelling industrious minorities. The United States is doing the same with its immigrants, legal or not. If it's not been expelling them by the hundreds of thousands a year since the Obama days, and worse now under Trump, it's been demonizing them as a threat -- and not a minor threat -- to America's economy and culture.

But it's the reverse. They're among America's salvations. We have a lesson to learn.

England expelled Jews in 1290 and wasn't heard of for the rest of the Middle Ages. It made Catholicism illegal and massacred or decimated Ireland of Catholics in the 17th century, only sending their industry to America. Good for us, and me: my second father was Irish. The Iberian peninsula was among the rare centers of culture and coexistence during the middle ages, but Catholic Spain expelled Muslims and Jews around the time of the discoveries of the New World. If American gold staved off decline for a while, Spain was soon a forgotten power. By 1700, it was a footnote to Europe. Louis XIV gave France its greatest century in the 1600s. But in 1685 he revoked the Edict of Nantes, one of the great milestones in the history of tolerance, and declared Protestantism illegal. Massacres followed. Huguenots fled, and French industry began a long decline that would not be reversed until well after the Revolution of 1789.

In every case, wherever fleeing Jews, Muslims, Catholics and Protestants migrated, the economy benefited, in some cases boomed, and in one case, ours, created a superpower. The United States would have been nothing without its millions of immigrants, so many of them illegal then or now, the world's refuse to this day fissioning into prosperity. Nor is it a mystery why Japan, so proud of its racial purity as to prohibit immigration, has been in an economic coma for two decades.

Now the Trump administration is raiding 7-Elevens, terrorizing immigrants in vast sweeps, including children, pledging to throw out hundreds of thousands of Salvadorans, Haitians and others from countries that don't fit Donald Trump's idea of racial purity, and fixating on just building a wall. It doesn't get more retrograde. Just pointing to one or two cases of an undocumented immigrant committing a nasty crime (the most notorious case of which proved to be less than advertised) doesn't alter the reality that immigrants, whatever their legality, commit less crimes than Americans and draw on fewer resources, welfare and medical services included, than do natives.

And the old excuse that nobody is attacking legal immigrants, only so-called illegal ones, doesn't work anymore, because the prejudice has no bounds. The defense of legal immigrants becomes a mask for a denigration of undocumented immigrants that's no less repulsive than the president's racism. It is its mirror, laid bare by a prejudice unattached to any evidence that would justify it.

We keep focusing on legalizing the status of Dreamers, those children of undocumented immigrants who've been here their whole lives, as if their aspirations are more valid than the people who brought them here.

Would they be jumping the line? Certainly, and that's a compelling argument from others who take the legal route, waiting and wrestling with hurdles and luck. But the the line the undocumented took and the lines the more documented ones are taking are like borders on a map. They're constructs that defy the impulse not only of proximity but of demand: it isn't only the undocumented who are susceptible to the magnet that leads them here but their American employers at innumerable levels of society who keep the border magnetized because they know -- and you should know as well, but you'd rather refuse to know -- that we can't do without them. Our agriculture, our tourism, our child care sectors would collapse without them. In other words, our economy.

So we'd do better to legalize, even naturalize, all 11 or 12 million so-called undocumented immigrants. Ronald Reagan did it with almost 3 million undocumented immigrants in 1986 -- all who'd entered the United States before 1982. It's not as if it hurt the country. To the contrary. The 1990s were its best yet, at least by some economic measures. Replicating the Reagan amnesty would be no different than the United States embracing immigrants for two centuries: they made this country then. They're keeping it vibrant now, and doing so while working in the shadows, underground, on the run. Imagine if they were freed of that anxiety. Imagine the industry gained from their integration, from ending police-state tactics that have turned the immigration service into a gang of goonish brown shirts well deserving of their icy acronym.

Terrorizing and expelling any of them would damage our own economy, which -- putting aside inequality that tax laws, not immigrants, have fostered -- clearly isn't suffering now. That wall would only hurt us, and make us look stupid, fearful and most of all, un-American. Of course this country is capable of giving its undocumented a path to legalization. If Reagan did it, his lesser GOP progeny certainly could.

We're America after all, the land where only the impossible is illegal. If not, then let's stop kidding ourselves and quit calling ourselves great, because we certainly aren't acting it.

Related Topic(s): America Culture Of Violence; American_History; Immigrants; Racism; Un-american; Undocumented Workers, Add Tags
Add to My Group(s)
Go To Commenting
The views expressed herein are the sole responsibility of the author and do not necessarily reflect those of this website or its editors.