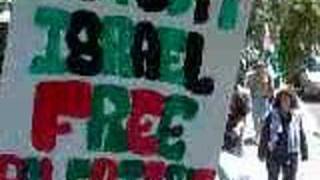 You can always depend on Israel periodically to mass-murder bunches of Arabs in proportions as lopsided and unforgiving as our own mass shootings in the United States, often more so. And as with mass shootings, which we now automatically blame on everything in the known and unknown universe but America's rabid debasement for guns, you can always depend on the American public to scapegoat Israel's war crimes, blame them on anything and everyone (terrorists, animals, Hamas ragheads, stone throwers and other synonyms for "Arab") but Israel's bigoted death machine.

While Ivanka Trump was flashing the toothy grin of a flossed and fluorinated Marie-Antoinette at the opening of the American Embassy in Jerusalem this week, 60 unarmed Palestinians were getting massacred by the Israeli military a few miles away in Gaza. It was nothing new except for the scale of the massacre and its concurrence with Trump flipping the bird to anyone who still thinks Palestinian lives matter, or that there's anything left of the two-state solution. The Israeli army has been murdering unarmed Palestinian protesters for months now without a peep from Trump, only encouragement. Sixty Palestinians were killed Monday, But 112 have been killed since protests at the so-called fence began in March.

Incredibly, the response from the United States has been either indifference or a defense of Israeli war crimes (it is a war crime for soldiers to kill unarmed protesters), using the sort of language last heard when white supremacists defended the massacres of black protesters and their supporters during the civil rights era. Blacks were compared to terrorists then, too. They were dehumanized, as they had always been, making killing them not only easier, but more desirable. So the killings went on until the sights of southern violence against non-violent protesters became too much for the nation's conscience.

These days we hear that Palestinian protesters are violent because they throw stones or rush a fence built on their own lands. But in the words of the United Nation's Michael Lynk, who reports on human rights in the Palestinian territories, the blatant, disproportionate use of force by Israel is "an eye for an eyelash."

And what, exactly, is that fence? American audiences have been led to believe that it's some sort of border, that by rushing or breaching it Palestinians are endangering Israelis on the other side. It's nothing of the sort. The New York Times described it this way: "The fence is actually two parallel barriers built by the Israelis: a formidable one of barbed-wire within Gaza and a 10-foot-high metal "smart fence" packed with surveillance sensors along the Israel demarcation line. A restricted buffer zone as wide as 300 yards is between them. Israel has warned that people in the zone without authorization risk being subjected to deadly force."

In other words it's got more similarities with the East German army's Berlin Wall -- actually twin parallel walls -- and its no man's land during the Cold War. The difference is that first, the East Germans hadn't stolen West German soil to build their walls. Both of Israel's fences are on Palestinian land. Second, East Germans who approached the wall weren't gunned down. Only those who went into the no-man's land were. And in nearly 30 years of the Berlin Wall, 80 people were killed that way. Bad enough, but that's barely a month's tally on the Israeli army's watch.

Israel murders Palestinians who so much as approach the first fence. That doesn't recall the Berlin Wall so much as Andersonville prison, the confederate death camp where the word "deadline" gained currency, because it marked the line, away from the prison fence, that marked the point where prisoners were killed the moment they crossed it. Keep in mind, no Palestinian breached either fence on Monday. They were shot only because they went too close, or tried to damage the first fence. No Palestinian came close to going into Israel because both fences are on Palestinian territory, And neither is a border fence, because Israel doesn't recognize any border there. Which makes the Andersonville comparison even more apt, even if we assume every fence-rusher was Hamas: they were unarmed.

And in Gaza, the most ignored humanitarian disaster on the planet for the past two decades, 2 million Palestinians are held prisoner in the world's biggest open-air prison -- Gaza's size is exactly that of Bunnell: 140 square miles -- in endless poverty, without rights, without hope, and now without so much as the right to protest. When they do -- and god knows why they should, ingrates -- no rubber bullets for those animals, no water hoses, not even Bull Connor dogs or other non-lethal, slightly less barbaric means usually used against demonstrators. Only live bullets for that kind.

Of course it's a propaganda coup for Hamas, of course Hamas is pulling strings, of course Hamas can be -- though not with nearly the savvy, the firepower, the sheer bloodthirstiness -- as cowardly as Israel's military. But to indict the whole Gaza catastrophe as a Hamas job is just another way of demeaning Palestinians, of denying them an identity of their own, a longstanding Israeli specialty (Israel has been denying Palestinians' right to exist since 1947).

It's another way of saying that Palestinians have no mind or humanity of their own separate from Hamas, as if a Palestinian girl could not possibly be growing up wishing she were not living in a mass prison, as if a Palestinian boy could not possibly have aspirations more lofty than staring at a fence, separate and independent from Hamas. Why should they? They're not humans. They're Hamas terrorists, or terrorists in the making. Of course it's all Hamas. To humanize them would collapse the Israeli necessity of defining them exclusively as scum out to murder little Israeli boys and girls, whose individuality and innate virtue goes without saying.

The dehumanization of Palestinians rings true with a segment of the American audience because we saw this with Black Lives Matter. A human rights movement pleading for the safeguarding of young black men -- our own Arabs, called much worse than ragheads to this day -- was perverted in the lense of Fox-type fabricators into a mob of terrorists. All it took was the odd hothead who happened to be black whose criminal acts, however errant or isolated, could be turned into emblems of Black Behavior, since we know that what one black man does is automatically representative of what all blacks do from here to Somalia and back.

But have a mass of white supremacists marching down a University town, brandishing tiki torches and bellowing racist chants before actually murdering a counter-demonstrator the next day, and all of a sudden "some of them are fine people," in the words of our own president. Well, of course all Israeli servicemen are fine people, not just some, and all Palestinians are Black Lives Matter terrorists in rag: The existence of Hamas proves it.

Apologists for Israel's brutality immediately pull the "how many Israelis have to die" argument, as if Israelis have been dying in this one-sided fight. They haven't. When Israel last clobbered Gaza, in 2014, 18,000 Palestinian homes were either demolished or damaged. In Israel? One home. More than 500 Palestinian children were killed. Israeli children? One. Since the protest at the fence began, 112 Palestinians have been killed. Israelis? Zero. As Marilyn Garson, who worked in Gaza for four years, wrote in Haaretz, the Israeli daily, this week: "Those ratios indicate that terms like 'war' poorly describe the nature of the violence that Gazans experience. 'War' suggests a reciprocal violence, tempered by mutual mortal risk. In Gaza, the violence, the mortal risk, and the damage are so one-sided that different language is needed to convey it. The actual ratios of loss convey that one side holds overwhelming power, and the other side lives with overwhelming threat."

But we still buy into Israeli propaganda about the Palestinian "threat," as if those demonstrators at the fence are like so many thousands of Dick Hickorys and Perry Smiths, the felons of Truman Capote's "In Cold Blood," just waiting to break free and murder the Clutters beyond -- as if the most powerful military in the Middle East wouldn't slaughter them before they made it within miles of any Israeli home. As if the Israeli military didn't do precisely that. Not that demonstrators were felons. Or armed. Or without 2 million reasons to demolish the fence. They were unarmed. And they were murdered.

Meanwhile we Americans applaud, plant a time bomb in the form of an embassy in Jerusalem, or look the other way. We are one with the murderers.

Related Topic(s): Hamas; Israel; Israel Attacks Gaza; Israeli-palestinian; Israeli_Propaganda; Mass Extinction; Mass Shooting, Add Tags
Add to My Group(s)
Go To Commenting
The views expressed herein are the sole responsibility of the author and do not necessarily reflect those of this website or its editors.