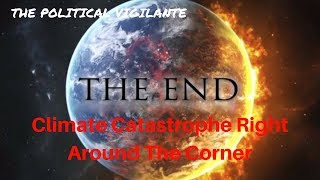 In the early 80s the New Yorker ran a three-part series called "The Fate of the Earth" by Jonathan Schell. At the time there was a great deal of fear that the world would end in a nuclear holocaust. Ronald Reagan was president. He'd not yet had his epiphany about the horrors of nuclear war. The Soviet Union's expiration date was still a few years away. It was pointing SS-20s at Europe, those multi-warheaded missiles each capable of delivering 150 kilotons of destruction, Reagan was responding with Pershing missiles' 400 kilotons.

The fear was real. We were demonstrating in the streets, writing testaments, hanging UNICEF posters in our rooms that asked "What would you like to be when you grow up?" The answer, of course was alive.

"The Fate of the Earth" was a call to arms, or rather to disarm, an attempt to describe the global Hiroshimas we were hurtling toward if we didn't become wiser. Its most arresting pages describe what it would look like if a 20-megaton nuclear bomb exploded on the Empire State Building. I was in high school at the time. I remember reading the article while visiting my brother at Columbia University, and looking out his window at the Manhattan skyline Schell's descriptions were demolishing the six-mile-wide fireball, the millions of New Yorkers, myself among them, reduced to radioactive dust, the death of 20 million people and the reduction of the country to what he called a "republic of insects and grass." Obviously, we're still here, and books like Schell's played a significant role in what turned into an era of significant arms control and disarmament.

The problem, or perhaps the opportunity, is that the same sort of language Schell used in 1983 can apply today to the slow-building catastrophe of climate change. "Since we cannot afford under any circumstances to let a holocaust occur," Schell wrote back then, "we are forced in this one case to become the historians of the future -- to chronicle and commit to memory an event that we have never experienced and must never experience."

The difference is that the holocaust this time is slow, giving us the illusion of adaptability. Much of it is out of view, allowing us to ignore it. We've sensed temperatures getting warmer in Florida, we already see the effects of rising seas on Miami, whose voters just levied a higher property tax on themselves to combat the rise. Hell, we're seeing it in Flagler, where we just finished wasting $20 million on repairing dunes and are about to waste another $50 million or more on an ultimately futile beach renourishment effort in Flagler Beach, not including the millions the transportation department is spending on road repair and sea wall construction. But it's still nothing compared to the much higher and faster temperature rises the Arctic has been experiencing, with reports of 84 degrees near the Arctic Ocean last month.

Even if we're not seeing it or experiencing it, we're learning about it. Every few weeks the United Nations, various governments, including our own, or research agencies issue reports detailing the extent of the catastrophe. A few weeks ago the UN released the most extensive study to date on the effects of global warming on biodiversity. It concludes that current activity will lead to the extinction of a million plant and animal species. In a world of just 8 million species, that's cataclysmic.

There's not much speculation to this. Actual species are going extinct as we speak. A Hawaiian tree snail did so on new Year's Day, as if to kick off another year of necrology. Bees, frogs, butterflies are all disappearing in genocidal numbers, as are coral reefs and forests. Two numbers are increasing: the volume of carbon dioxide in the atmosphere, and the number of human beings on earth.

It should all be a call to arms no less urgent than that of the "Fate of the Earth." Instead, we see inaction and immediate ridicule, at least in America's current and toxic political climate, of any suggestion of government intervention. Our own president is still mocking and denying the science. But government intervention is the only way to at least slow down a catastrophe of this magnitude. You can't recover from a hurricane without government intervention. Climate change is a slow-burning hurricane swirling over the entire planet. Yet its deniers still claim it's just a matter of adaptation, or else make the even more ridiculous claim that technology and private industry alone can take care of it, if at all. Technology and private industry are certainly a necessary part of the solution. But they're not its leaders. They can't be.

We see this every time government is presented as part of the solution. It's a given. Any attempt at a serious policy proposal provokes an automatic reaction disproportionately alien to the policy's aims. It goes like this: universal health care? "Death panels." Tax the rich? "Socialism." Minor gun-safety regulations? "Taking your guns away." It's absurd. It makes rational discussion impossible. But that's the point. The disproportion aborts any chance of further discussion, reasoned debate itself being the greatest threat. Because the moment you pry someone from the seduction of slogans and break the heathen proposal down to its component parts, opposition is less sure of itself. It recognizes the possible, which may soon be essential.

That's the path the income tax, Social Security and Medicare all took over decades, and more recently, same-sex marriage. Each was thought to spell the end of American civilization. Each became untouchable. (Gay marriage isn't sacrosanct yet, but it'll get there.)

So it will be with the Green New Deal. The name may be hoaky. The substance isn't. It's as simple as this: either we adopt it in the main or we kiss goodbye life as we've known it, in coastal Florida especially. These coasts we're so fond of are being redrawn as we speak. No beach renourishment or seawall will stand in the way.

The Green New Deal isn't a massive proposal. It's a set of principles a few hundred words long. But it immediately turned its kennel of critics into Pavlovian yappers, admirably summed up in a tweet by the Supreme Leader himself: "I really don't like their policy of taking away your cars, taking away your airplane flights, of 'let's hop a train to California,' or 'you're not allowed to own cows anymore.'"

The Green new Deal proposes none of those things. Its opponents haven't read it. They should. It even reads like a set of tweets. Pry it away from the inquisitors, and it's something most of us would find reasonable: Here are some examples: "Invest in the infrastructure and industry of the United States to sustainably meet the challenges of the 21st century." "Create millions of good, high-wage jobs and ensure prosperity and economic security for all people of the United States." "Dramatically expanding and upgrading renewable power sources" and "smart power grids." Secure "clean air," "healthy food," "access to nature" and "a sustainable environment" for "all people of the United States for generations to come."

Any objections so far?

Related Topic(s): Catastrophe; Climate; Green New Deal; Inequality, Add Tags
Add to My Group(s)
Go To Commenting
The views expressed herein are the sole responsibility of the author and do not necessarily reflect those of this website or its editors.