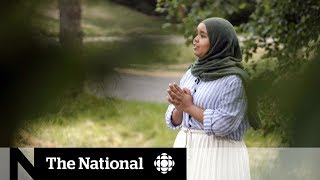 How it feels to be told to go back where you came from. As Donald Trump targets democratic congresswomen of color with his tweets.
(Image by YouTube, Channel: CBC News: The National)   Details   DMCA

Go back where you came from.

If I had a dollar for every time I've heard that line, I'd be investing in euros by now. I've been hearing the line on three continents for going on six decades, with a few happy exceptions. So the good news is that it is part of the universal lexicon. It's one of those rare greeting cards that would be understood in every time zone by every culture, literate or not. The line, along with its mentally deficient cousin -- "if you don't like it here, leave" -- ironically feels at home anywhere on the planet, because it's spoken everywhere in every language, every gesture, and especially these days, with the wonders of anonymity and the sewers of social media, every keyboard, even allegedly presidential ones.

You're born, your first words are mom or dad, and before long, you're either hearing go back where you came from, or, if you're the bullying kind, telling it to somebody. The first time I heard it must've been from one of my older brothers, who'd have been telling me to go back where I came from, meaning my room, if I was aggravating him too much.

The first time the line really stung I was 13 years old and in boarding school in England, freshly exiled from where I came from, and surrounded by snotty little English kids who liked nothing better than to tell a pimply Lebanese to go back where he came from. I didn't speak English at the time but that line, I could understand perfectly. The reason it stung wasn't because I took it as an insult, but because I very much wanted to go back where I came from. I was homesick. It's all I thought about day and night. But I couldn't go back. Lebanon was at war. The only place I could go back to was my dorm, which didn't smell that good.

A year later we made the move to New York and I was enrolled at the United Nations International School, where all of us high school kids were from somewhere else. Since these were diplomats' sons and daughters for the most part, each had lived on a raft of continents by now, so if any of us started going down the path of telling someone to go back where he or she came from, there'd be no end to it. That's all we'd be saying all day. Manhattanites could still tell me to go back to Queens, as foreign and lovely a country as any I've known, but it didn't have the same ring, the same intended venom lashing a banishment back to something more third world, a place that could validate the supremacy, invariably white, of the banshee banisher. That's probably why I don't think I heard that line once in the three years I was in school there. I'm not sure I heard it much in college, either, because not a single one of us could claim to be from Greenwich Village, where we were attending school, and so couldn't launch the slur with a straight face.

A pattern emerged. The more the people around me were from somewhere else, the less that line seemed to have currency. Then the further I moved south over the years -- North Carolina, West Virginia, Florida -- the more the line came back. North Carolinians and West Virginians had an excuse: their roots at least went back to a few forebears six feet under, and West Virginians especially had the same experience with outsiders as anyone who's been colonized, demeaned, exploited, raped and left for non-existent.

But what's Floridians' excuse, aside from New Yorkers' residual driving habits? Every time I write a column now, there's always a good number of people feel entitled to tell me to go back where I came from, their local ancestry -- in this town of ours not older than bell bottoms -- somehow dating back to Jurassic squares on their calendars, though the line is becoming a knee-jerk response from a number of commenters against anything they don't like infringing on their notion of what their precious town should be like. You'll see it on stories about recycling, crime, art in Town Center, fireworks -- whatever. (Actually, you won't: the rule at FlaglerLive is that any comment even hinting about telling someone to go back where they came from is held back. You don't get to make that call. Not here.)

In my case I'm sure what these people mean as often as not when they tell me to go back where I came from, since few really know more geography than the whereabouts of their TV remote, is that I should go back to the P Section. It's just as well. It's home, and by definition, right now, it's where I come from. I can't think of a more sacred property right. Everything else is ancestry, whether I lived it decades ago in another country or whether my monkey ancestors lived it in East Africa a few million years ago (though in fairness to Africa, Florida was one of its ribs, t ectonically exiled 500 million years ago. So you see, we're still all Africans).

Put another way: the guy who's lived here 50 years, or who traces his lineage to the scurvy of the Mayflower, doesn't have any more right to call the place home than does the neighbor who moved in yesterday, no matter where from. He doesn't have more vested rights of any kind, not even political rights: unlike the U.S. Constitution's minimums for the presidency (the natural-born provision is a vestige of the document's more racist xenophobias, and its age requirement an outdated gift to the decrepit), a local resident has no minimum-time requirements to qualify for a local office, assuming citizenship is a given. A driver's license indicating local residency is enough, as it should be. None of us is without an ancestry that would make us all aliens, even to ourselves, but for the place we choose to call home, here, today, wherever our here happens to be.

We're a movable feast of a nation. Our political freedoms should reflect it, and do, because we're all carpetbaggers in America going back to the original ones who crossed over the Bering Strait, and they'd been carpetbagging since Kenya. Our neighborliness should reflect the fact, too, though it does so less these days for an angry, scared and needlessly embittered demographic generally defined by its paler memories of an America that never was, and, we should hope for all our sakes, never will be.

Related Topic(s): America; Ancestry; Bullying; Immigrants, Add Tags
Add to My Group(s)
Go To Commenting
The views expressed herein are the sole responsibility of the author and do not necessarily reflect those of this website or its editors.