Reprinted from Moon of Alabama 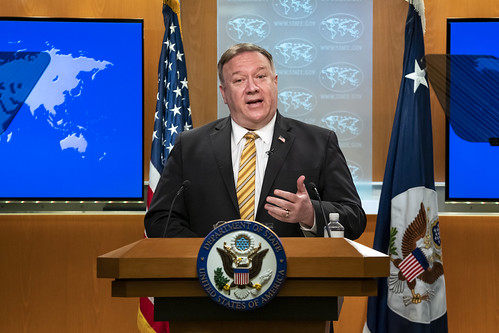 The New York Times continues to provide anti-Russian propaganda and to incite against it:

Pompeo Says Russia Was Behind Cyberattack on U.S.
Secretary of State Mike Pompeo is the first member of the Trump administration to publicly link the Kremlin to the hacking of dozens of government and private systems.

Secretary of State Mike Pompeo said Friday it was clear that Russia was behind the widespread hacking of government systems that officials this week called "a grave risk" to the United States.

That is a quite definite statement.

But it is very wrong. Pompous did not say "that it was clear that Russia was behind" the IT intrusions.

The third paragraph in the NYT story, which casual readers will miss, quotes Pompous and there he does not say what the Times opener claims:

"I think it's the case that now we can say pretty clearly that it was the Russians that engaged in this activity," Mr. Pompeo said in an interview on "The Mark Levin Show."

The first paragraph of the Times statement tries to sell a vague statement as an factual claim.

Moreover - Pompous finds it amusing that the CIA lies, steals and cheats (vid). As a former CIA director he has not refrained from those habits. Whenever Pompous says something about a perceived U.S. 'enemy' it safe to assume that it he does not state the truth.

On top of that even his boss does not agree with his claim:

Contradicting his secretary of state and other top officials, President Donald Trump on Saturday suggested without evidence that China not Russia may be behind the cyberattack against the United States and tried to minimized its impact.

Trump AND Pompous both made their contradicting assertions "without evidence".

It is inappropriate for the media to accuse Russia - or China - of the recently discovered cyber-intrusion when there is zero evidence to support such a claim.

The Times did that at least twice without having any evidence to support the claim:

It also published a rather aggressive and stupid op-ed by Thomas A. Bossert, Trump's former cyber-security adviser:

Moon Of Alabama was opened as an independent, open forum for members of the Whiskey Bar community.  Moon of Alabama's purpose is to discuss politics, economics, philosophy and blogger Billmon's Whiskey (more...)
Related Topic(s): Cyber; Hackers; Russia, Add Tags
Add to My Group(s)
Go To Commenting
The views expressed herein are the sole responsibility of the author and do not necessarily reflect those of this website or its editors.