Published from Moon Of Alabama 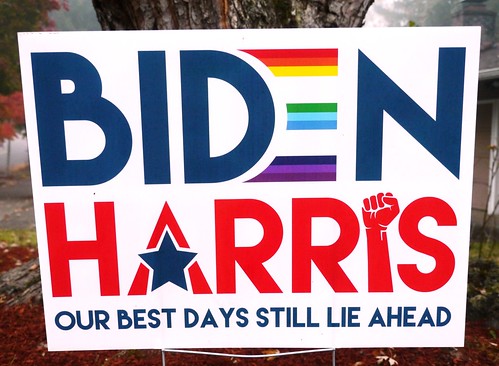 Pepe Escobar is as pessimistic about a Harris (Biden) administration as I am. The incoming foreign policy team would be the return of the blob that waged seven wars during the Obama/Biden administration:

Taking a cue from [the Transition Integrity Project], let's game a Dem return to the White House - with the prospect of a President Kamala taking over sooner rather than later. That means, essentially, The Return of the Blob.

A Dem presidency, right away, will need to confront the implications of two wars: Cold War 2.0 against China, and the interminable, trillion-dollar GWOT (Global War on Terror), renamed OCO (Overseas Contingency Operations) by the Obama-Biden administration.

The Democratic White House team Escobar describes (Clinton, Blinken, Rice, Flournoy) would be an assembly of well known war mongers who all argue for hawkish policies. The main 'enemies', Russia and China, would be the same as under Trump. Syria, Venezuela, Iran and others would stay on the U.S. target list. U.S. foreign policy would thereby hardly change from Trump's version but would probably be handled with more deadly competence.

In contrast, two near-certain redeeming features would be the return of the US to the JCPOA, or Iran nuclear deal, which was Obama-Biden's only foreign policy achievement, and re-starting nuclear disarmament negotiations with Russia. That would imply containment of Russia, not a new all-out Cold War, even as Biden has recently stressed, on the record, that Russia is the "biggest threat" to the US.

I believe that Harris (Biden) will disappoint on both of those issues. The neoconservatives have already infested the Harris (Biden) camp. They will make sure that JCPOA does not come back:

Last night on an official Biden campaign webinar led by "Jewish Americans for Biden", and moderated by Ann Lewis of Democratic Majority for Israel, two prominent neocon Republicans endorsed Biden, primarily because of Trump's character posing a danger to democracy. But both neocons emphasized that Biden would be more willing to use force in the Middle East and reassured Jewish viewers that Biden will seek to depoliticize Israel support, won't necessarily return to the Iran deal and will surround himself with advisers who support Israel and believe in American military intervention.

Eric Edelman, a former diplomat and adviser to Dick Cheney, said Trump's peace plan has fostered an open political divide in the U.S. over Israel, ...

Eliot Cohen, a Bush aide and academic, echoed the fear that Israel is being politicized. ...
...
Cohen and Edelman opposed Obama's Iran deal, and both predicted that Biden will be hawkish on Iran.
...
"There will be voices" in the Biden administration that seek a return to the Iran deal, but the clock has been running for four years, and we're in a different place, he said. And "it will be hard [for Biden] not to use the leverage that the sanctions provide in part because Iran is not abiding by a lot of the limits of the nuclear agreement" They're about three, maybe four months away from having enough fissile material to actually develop a nuclear weapon."

For lifting the sanctions against Iran the Harris (Biden) administration will demand much more than Iran's return to the limits of the JCPOA. Iran will reject all new demands, be they about restricting its missile force or limiting its support for Syria. The conflict will thereby continue to fester.

The other issue is arms control. While a Harris (Biden) administration may take up Putin's offer to unconditionally prolong the New-START agreement for a year it will certainly want more concessions from Russia than that country is willing to give. Currently it is Russia that has the upper hand in strategic weapons with already deployed hypersonic missiles and other new platforms. The U.S. will want to fill the new 'missile gap' and the military-industrial complex stands ready to profit from that. The New-START prolongation will eventually run out and I do not see the U.S. agreeing to new terms while Russia has a technological superiority.

Domestic policies under a democratic president will likewise see no substantial difference. As Krystal Ball remarked, here summarized from a Rolling Stone podcast:

But even with a Biden win, Ball doesn't think it will mean much for policy.

"My prediction for the Biden era is that very little actually happens," says Ball. "Democrats are very good at feigning impotence. We saw this in the SCOTUS hearings as well. They're very good for coming up with reasons why, 'oh those mean Republicans, like we want to do better healthcare and we want left wages, but oh gosh, Mitch McConnell, he's so wiley, we can't get it done.'"

'Change' was an Obama marketing slogan to sell his Republican light policies. A real change never came. The Harris (Biden) administration must be seen in similar light.

I therefore agree with the sentiment with which Escobar closes his piece:

Moon Of Alabama was opened as an independent, open forum for members of the Whiskey Bar community.  Moon of Alabama's purpose is to discuss politics, economics, philosophy and blogger Billmon's Whiskey (more...)
Related Topic(s): Democratic Senatorial Campaign Committee, Add Tags
Add to My Group(s)
Go To Commenting
The views expressed herein are the sole responsibility of the author and do not necessarily reflect those of this website or its editors.