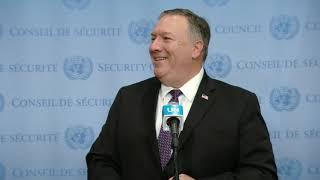 US on Iran Sanctions - Security Council Media Stakeout (20 August 2020) Informal comments to the media by Michael R. Pompeo, Secretary of State of the United States of America on the situation in Iran. United States Secretary of ...
(Image by screen shot)   Details   DMCA

The snapback option is part of the Dispute Resolution Mechanism that is laid out in article 36 and 37 of the nuclear deal with Iran. The UN Security Council adopted the deal in its resolution 2231. When the U.S. move was first announced we explained in detail why the it would fail and summarized:

Only participants of the deal can trigger the snapback process. The U.S. is no longer recognized as such a participant.

Before a snapback can occur there are actually formal processes in the 'Joint Commission' and in the UNSC which must be followed. Those processes will not happen because the other JCPOA and UNSC members will simply ignore a U.S. attempt to trigger them.

Other members of the deal could still do that though. But the Europeans are unlikely to take the U.S. side on this issue.

The legal argument the U.S. makes to claim a right to trigger the snapback sanctions is bizarre and it does not hold up.

Soon after Pompeo's announcement Russia, China and the EU3 countries Britain, France and Germany as well as Iran rejected the U.S. move. EU High Representative Josep Borrell, who coordinates the Joint Commission that supervises the nuclear deal, declared the U.S. move to be null and void:

I take note of today's announcement by the US regarding the so-called UN sanctions "snapback mechanism" under UN Security Council resolution 2231.

As I have repeatedly recalled, the US unilaterally ceased participation in the JCPOA by presidential Memorandum on 8 May 2018 and has subsequently not participated in any JCPOA-related activities. It cannot, therefore, be considered to be a JCPOA participant State for the purposes of possible sanctions snapback foreseen by the resolution.

Belgium, which is the UN Security Council "facilitator" of the residual UN sanctions on Iran under UNSC resolution 2231, also rejected the U.S. position.

Pompous may still try procedural tricks at the United Nations to somehow put the issue on the agenda. But other Security Council members are likely to find ways to prevent that.

This is the second time within a week that U.S. attempts against Iran at the United Nations were rejected. Last week the U.S. proposed to prolong an arms embargo against Iran. The current one will run out in October. The move failed:

The US has suffered a humiliating defeat at the United Nations as its proposal to extend an arms embargo on Iran won support from only the Dominican Republic at the security council vote.

The whole attempt to reintroduce sanctions under the nuclear deal has only one purpose:

The Trump administration is not seeking to restore U.N. sanctions because they want to preserve the JCPOA, because it has been their goal all along to kill the agreement and create a pretext for conflict.

The U.S. hopes to pressure Iran until it formally declares the deal dead. That could then give pretext for launching a larger conflict against the country. But as long as the other deal members hold up their commitments Iran is likely to stick to the deal.

The U.S. therefore swings the wrecking ball that it calls foreign policy against anyone who still supports the deal.

Moon Of Alabama was opened as an independent, open forum for members of the Whiskey Bar community.  Moon of Alabama's purpose is to discuss politics, economics, philosophy and blogger Billmon's Whiskey (more...)
Related Topic(s): Iran, Add Tags
Add to My Group(s)
Go To Commenting
The views expressed herein are the sole responsibility of the author and do not necessarily reflect those of this website or its editors.