Source: The Guardian
The axiom that political officials abuse their power and lie to the public when operating in the dark is proven yet again 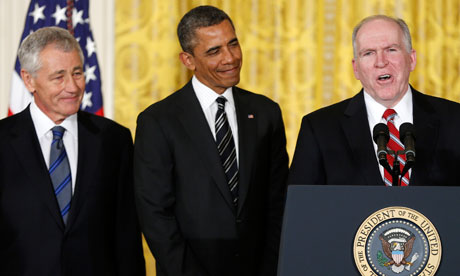 For years, senior Obama officials, including the president himself, have been making public claims about their drone program that have just been proven to be categorically false. The evidence of this falsity is so conclusive that even establishment sources are using unusually harsh language -- including "lies" -- to describe Obama's statements.

McClatchy's national security reporter, Jonathan Landay, obtained top-secret intelligence documents showing that contrary to assurances it has deployed US drones only against known senior leaders of al-Qaida and allied groups, the Obama administration has targeted and killed hundreds of suspected lower-level Afghan, Pakistani and unidentified 'other' militants in scores of strikes in Pakistan's rugged tribal area." That article quotes drone expert Micah Zenko of the Council on Foreign Relations as saying that "McClatchy's findings indicate that the administration is 'misleading the public about the scope of who can legitimately be targeted.'"

In his own must-read article at Foreign Policy about these disclosures, Zenko writes -- under the headline: "Finally, proof that the United States has lied in the drone wars" -- that "it turns out that the Obama administration has not been honest about who the CIA has been targeting with drones in Pakistan" and that the McClatchy article "plainly demonstrates that the claim repeatedly made by President Obama and his senior aides -- that targeted killings are limited only to officials, members, and affiliates of al-Qaida who pose an imminent threat of attack on the US homeland -- is false." Beyond the obvious harms of having the president and his administration continuously lie to the public about such a crucial matter, Zenko explains that these now-disproven claims may very well make the drone strikes illegal since assertions about who is being targeted were "essential to the legal foundations on which the strikes are ultimately based: the 2001 Authorization to Use Military Force and the UN Charter's right to self-defense." Marcy Wheeler uses the documents to show how claims about drones from other key officials, including Senate Intelligence Chairwoman Dianne Feinstein, are also unquestionably false.

Related Topic(s): Drone Wars; Drones And Soldiers; Obama Effect; Transparency; Whistleblowers-ing, Add Tags
Add to My Group(s)
Go To Commenting
The views expressed herein are the sole responsibility of the author and do not necessarily reflect those of this website or its editors.