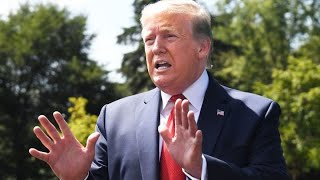 Trump calls himself the .Chosen One. as he defends trade war with China
(Image by YouTube, Channel: CNBC Television)   Details   DMCA

He referred to himself as "the chosen one." He quoted a rabid conspiracy theorist radio host who declared that Israeli Jews love Trump as if he were the "King of Israel" and "the second coming of God," while Trump himself accused American Jews of "great disloyalty" if they voted for Democrats. He attacked the prime minister of Denmark ("nasty") because she will not sell him Greenland and she mocked the very idea as "absurd." He suggested he might serve more than two terms in office. He slurred his words while reading a speech off a teleprompter. He accused journalists of trying to ruin the U.S. economy. He claimed Google had "manipulated" millions of votes in Hillary Clinton's favor during the 2016 election. He suggested giving himself a Medal of Honor. He said doctors in El Paso, Texas, left their operating rooms mid-surgery in order to greet him during his visit there following a local gun massacre. And he referred to the NRA as if it were a co-equal branch of the federal government.

That was all within the span of approximately 48 hours. For all previous American presidents, that would have far surpassed the irrational missteps they made during entire four- or eight-year terms. For Trump, it was just his vacation week.

Yet the press remains consistently timid in dealing with Trump's blatantly unstable behavior. Newsrooms today nearly uniformly refuse to address the mounting, obvious signs that Trump remains a deeply troubled man. In other words: Nothing to see here, folks.

Following Trump's erratic Greenland episode, The New York Times ran a head-shaking editorial headlined, "Mr. Trump and Greenland: Is This Real Life?" and described his strange view of the world as "frightening." But the Times refused to acknowledge the obvious context regarding Trump's instability. And of course, the Times refuses to call for Trump's resignation, even though it's clear the paper's editorial board views him as a dangerous, befuddled fool.

Related Topic(s): Craziness; Presstitutes; The Chosen One; Trump Hypocrisy, Add Tags
Add to My Group(s)
Go To Commenting
The views expressed herein are the sole responsibility of the author and do not necessarily reflect those of this website or its editors.