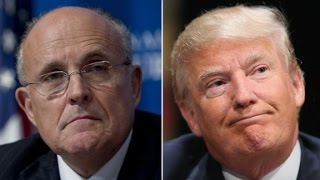 It was a head-scratcher when Rudy Giuliani was announced as Trump's new top defense attorney just a few weeks ago, while the White House struggles to contain mounting legal woes.

As a lawyer, Giuliani hadn't practiced inside a courtroom in nearly three decades, and his background was as a prosecutor, not a defense attorney.

Turns out the skeptics were right.

It's been two days since Giuliani's scattershot interview on Fox News -- where he conceded Trump paid back his attorney Michael Cohen for the $130,000 hush-money payment to Stormy Daniels in 2016 -- and the White House is still reeling.

"The explosive revelation, which Mr. Giuliani said was intended to prove that Mr. Trump and Mr. Cohen violated no campaign finance laws, prompted frustration and disbelief among the president's other legal and political advisers, some of whom said they feared the gambit could backfire," the New York Times reported.

"The president's other lawyers ultimately determined that Mr. Giuliani had consulted with Mr. Trump, people close to them said, but were left speechless about why he decided to make the disclosure in such a high-profile way and without any strategy to handle the fallout."

Giuliani's goal on Fox News seemed to be to inoculate Trump from any campaign donation violations in terms of Cohen's hush-money payment. But it appears he failed miserably at that.

Instead, all Giuliani did was to obliterate whatever strains of credibility the White House may have still had among the non-believers.

Related Topic(s): Giuliani Rudy; Lies; Mueller Investigation; Trump Adultery; Trump Expose, Add Tags
Add to My Group(s)
Go To Commenting
The views expressed herein are the sole responsibility of the author and do not necessarily reflect those of this website or its editors.