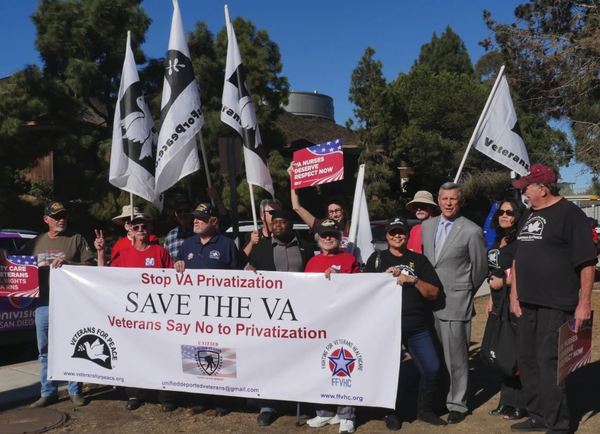 According to study after study, such as the Rand Corporation and the Annals of Internal Medicine, show that the Veterans Health Administration provides the best healthcare, has the best medical outcomes, the shortest wait-times, and does so at the lowest cost of any other large healthcare program anywhere. The VA healthcare system (VHA) has only one mission: to provide the best healthcare.

The success of the VHA is owed to its being socialized medicine, and its dedicated doctors, nurses, medical personnel and employees. The dedicated men and women of VHA prove that not everybody is motivated by profit. In fact, most people are not.

The VHA is a federally-funded government healthcare system. Unlike Medicare, Obamacare, and Medicaid it is not a health insurance program, which depends on the for-profit medical industry for healthcare. At VHA the government owns the "bricks and mortar": the hospitals, clinics, etc.

VHA owns all the medical equipment. It negotiates prices with suppliers and pharmaceutical companies. All the doctors, nurses, medical staff and employees are government employees. If that is not shocking enough to neoliberals, then consider that VHA employees are unionized by The American Federation of Government Employees (AFGE).

The plot to kill the Veterans Health Administration

In a sane world one would think that when something is so successful as the VHA, it would be embraced by the establishment as one solution to the nation's healthcare crisis. Instead the establishment has been trying to destroy VHA since its inception by President Lincoln in 1865.

Over VHA's 150 years it has had many ups and downs. The current war against VHA began with President Ronald Reagan in 1987. While Reagan was trying to kill the VHA, his soulmate in the UK, Margaret Thatcher had her daggers out for Britain's National Health Service (NHS). Reagan was slashing VHA benefits even as he went around pinning medals on Vietnam era veterans.

Both the VHA and NHS have survived, but the war to kill them is still on. The legendary journalist John Pilger is fighting now to save the NHS in the UK. In the US, Veterans for Peace has taken up the challenge to save the VHA from privatization. Many other legitimate veterans groups are also speaking out, and acting-out to save the VHA, such as Veterans Say No to Privatization.

The VHA is setting a "bad" example for neoliberals. All of the neoliberals' privatizations of government enterprises, austerity for the middle-class and poor, and easy-money for the banks called "quantitative easing" have proved to be disasters.

After over 10 years since the Great Recession of 2008, failed neoliberal economic policies have worsened inequality, wages have been stagnant, and the US economy continues to sink in its ability to provide the basic necessities of life to the American people. Obamacare turned out be an insurance fraud and a flop.

If the continued push of neoliberalism does not make sense, then it is because you do not recognize corruption. Privatization of state-owned enterprises is a conspiracy between corrupt politicians and corrupt corporations to defraud the public.

Socialized medicine at the VHA works great, even according to NATO's think tank the Rand Corporation. In a 2018 study it admitted that the VHA did better than all other large US healthcare programs:

"VA hospitals generally provided better quality care than non-VA hospitals and the VA's outpatient services were better quality when compared to commercial HMOs, Medicaid HMOs and Medicare HMOs". Consistent with previous studies, our analysis found that the VA health care system generally provides care that is higher in quality than what is offered elsewhere in communities across the nation."

So, study after study consistently finds that socialized medicine does best. The only reasons they want to kill the VHA is so that corporations can raid its $200 billion a year budget, and to destroy a good example that makes neoliberalism and capitalism look bad.

The corporate lobbyists for the private healthcare and health-insurance companies have been circling Washington like vultures. They don't care about veterans, and neither do the corrupt politicians. All they care about are bribes and corrupt profits.

Related Topic(s): Veterans Admin VA; Veterans Administration; Veterans Affairs Secretary David Shulkin; Veterans Benefits; Veterans For Peace, Add Tags
Add to My Group(s)
Go To Commenting
The views expressed herein are the sole responsibility of the author and do not necessarily reflect those of this website or its editors.