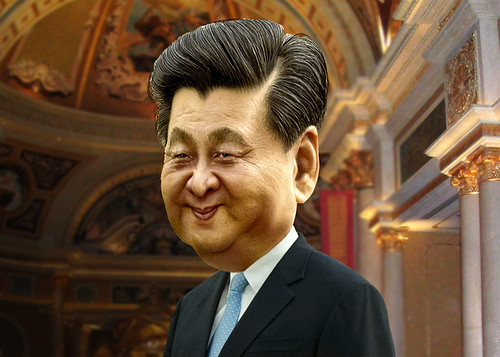 It's Lianghui ("Two Sessions") time -- the annual ritual of the Beijing leadership. The stars of the show are the top political advisory body, the Chinese People's Political Consultative Conference; and the traditional delivery of a work report by the Prime Minister to the top legislature, the National People's Congress (NPC).

The review of the draft outline of China's 14th Five-Year Plan will proceed all the way to March 15. But in the current juncture, this is not only about 2025 (remember Made in China 2025, which remains in effect). The planning goes long-range towards targets in the Vision 2035 project (achieving "basic socialist modernization") and even beyond to 2049, the 100th anniversary of the People's Republic of China.

Premier Li Keqiang, delivering the government work report for 2021, stressed that the target for GDP growth is "above 6%" (the IMF had previously projected 8.1%). That includes the creation of at least 11 million new urban jobs.

On foreign policy, Li could not draw a sharper contrast with the Hegemon: "China will pursue an independent foreign policy of peace" and will "promote the building of a new type of international relations."

That's code for Beijing eventually working with Washington on specific dossiers, but most of all focusing on strengthening trade/investment/finance relations with the EU, ASEAN, Japan and the Global South.

The outline of the 14th Five-Year Plan (2021-2025) for the Chinese economy had already been designed last October, at the CCP plenum. The NPC will now approve it. The key focus is the "dual circulation" policy, whose best definition, translated from Mandarin, is "double development dynamics."

That means a concerted drive to consolidate and expand the domestic market while continuing to push foreign trade/investment -- as in the myriad Belt and Road Initiative (BRI) projects. Conceptually, this amounts to a quite sophisticated, very Daoist, yin and yang balancing.

In early 2021, President Xi Jinping, while extolling Chinese "conviction and resilience, as well as our determination and confidence," was keen to stress the nation faces "unprecedented challenges and opportunities." He told the Politburo "favorable social conditions" must be created by all means available all the way to 2025, 2035 and 2049.

Which brings us to this new stage of Chinese development.

The key target to watch is "common prosperity" (or, better yet, "shared prosperity") to be implemented alongside technological innovations, respect for the environment, and fully addressing the "rural question".

Xi has been adamant: there's too much inequality in China - regional, urban-rural, income disparities.

It's as if in a cool reading of the dialectical drive of historical materialism in China, we would arrive at the following model. Thesis: imperial dynasties. Antithesis: Mao Zedong. Synthesis: Deng Xiaoping, followed by a few derivations (especially Jiang Zemin) all the way to the real synthesis: Xi.

On the Chinese "threat"

Li stressed China's success in containing COVID-19 domestically; the nation spent at least $62 billion on it. This should be read as a subtle message, addressed especially to the Global South, about the efficacy of China's governance system to design and execute not only complex development plans but also cope with serious emergencies.

Related Topic(s): China; China Investment Corp; China Politics; Covid-19; Peace; Xinjiang, Add Tags
Add to My Group(s)
Go To Commenting
The views expressed herein are the sole responsibility of the author and do not necessarily reflect those of this website or its editors.