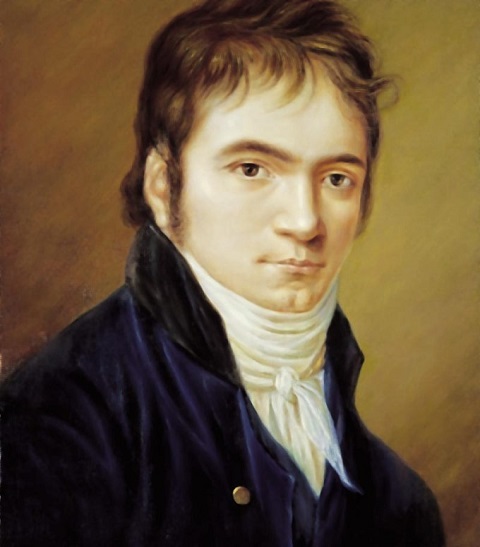 Two hundred and fifty years after Beethoven's birth, we're faced with something of a paradox: his music is known and beloved all over the world, probably more than that of any other composer, even as its real significance is hardly ever remarked on except in critical studies largely unread by the public. Familiarity, it seems, has bred, not contempt but ignorance. We hear the famous melodies for the thousandth time, whether in movies, commercials, or concerts, melodies from the third, fifth, sixth, ninth or other symphonies, or from piano concertos and sonatas or pieces of chamber music, but the cutting edge of this music has been dulled through overuse. That is, we have forgotten, and no longer seem to hear, the intensely political nature of Beethoven's musicits subversive, revolutionary, passionately democratic and freedom-exalting nature.

In the year of the great composer's 250th birthday, it would be fitting to recapture the music's essence, retune our ears to pick up its political and philosophical message. This is especially appropriate in our own time of democratic struggles against a corrupt and decaying ancien re'gime, a time of parallels with the Beethovenian era of revolution, hidebound reaction, and soaring hopes to realize "the rights of man." Beethoven belongs, heart and soul, to the political left. Centuries after his death, his music, especially if properly understood, still retains the power to transform, transfigure, and revivify, no matter how many political defeats its partisans and spiritual comrades suffer.

We might start with the most famous of Beethovenian motifs, the opening notes of the Fifth Symphony (1808). We've all heard the legend that they represent "fate knocking at the door." The source of this idea is Anton Schindler, Beethoven's notoriously unreliable secretary. Sir John Eliot Gardiner, world-renowned conductor, has a different interpretation: he detects the influence of Cherubini's revolutionary Hymne du Panthe'on of 1794 in the famous notes. "We swear, sword in hand, to die for the Republic and for the rights of man," the chorus sings, to the rhythm of da-da-da-duuum. Beethoven was a great admirer of Cherubini, not to mention a devoted republican, so Gardiner's theory is hardly far-fetched. In the stultifyingly conservative and repressive Vienna of 1808, Beethoven issued a clarion call to revolution in the very opening notes of one of his most revolutionary, Napoleonic symphonies. No wonder conservatives detested his music!

Some biographical details are in order. Beethoven was a child of the Enlightenment and remained so his whole life. Bonn in the late eighteenth century was steeped in the most progressive thought of the age: Kant, the philosopher of freedom, was a lively subject of discussion at the university, as was his follower Schiller, the poet of freedom, impassioned enemy of tyrants everywhere. The young Beethoven was heavily influenced by Eulogius Schneider, whose lectures he attended: one of the most important of German Jacobins, Schneider was so radical that in 1791 he was kicked out of the liberal university, whereupon he joined the Jacobin Club in Strasbourg. (There, he was appointed public prosecutor for the Revolutionary Tribunal, enthusiastically sending aristocrats to the guillotineuntil he lost his own head a couple years later.) Schneider's republicanism stayed with Beethoven, but it was Schiller whom Beethoven worshiped.

Schiller's poem "An die Freude," of course, impressed Beethoven immensely, given that he planned early on to set it to music and finally did so in the Ninth Symphony. But he was just as enamored of Schiller's idealistic, heroic plays, such as The Robbers, William Tell, and Don Carlos. In marginal notations on the latter play, he jotted down his own thoughts as a young man: "To do good whenever one can, to love liberty above all else, never to deny the truth, even though it be before the throne." Decades later, we find him exclaiming in a letter, "Freedom!!!! What more does one want???" In a similar vein, he once wrote to a friend, "From my earliest childhood, my zeal to serve our poor suffering humanity in any way whatsoever by means of my art has made no compromise with any lower motive. I am thoroughly delighted," he continued, "to have found in you a friend of the oppressed." The historian Hugo Leichtentritt concludes, "Beethoven was a passionate democrat, even in his youth; he was, in fact, the first German musician who had strong political interests, ideals, and ambitions."

Indeed, his first significant composition was his Cantata on the Death of Joseph II, a heartfelt and moving tribute to the enlightened reformer who died in 1790. Beethoven, who always disliked hierarchy, was wholly in sympathy with Joseph's attacks on the power of the Catholic Church and the Austrian aristocracy. His contempt for aristocrats was such that, years later, he was able to write an insulting note to his most generous benefactor, Prince Lichnowsky: "Prince, what you are, you are by circumstance and birth; what I am, I am through myself. There are, and always will be, thousands of princes; but there is only one Beethoven." Even his fashion sense was democratic. A woman who knew him wrote a reminiscence of his behavior in aristocratic Viennese salons: "I still remember clearly Haydn and Salieri sitting on a sofa"both carefully dressed in the old-fashioned way with wig, shoes, and silk stockings, while Beethoven would come dressed in the informal fashion of the other side of the Rhine, almost badly dressed." Corresponding to this was the fact that he was "without manners in both gesture and demeanor. He was very haughty. I myself saw the mother of Princess Lichnowsky"go down on her knees to him as he lolled on the sofa, begging him to play something. But Beethoven did not."

One reason for Beethoven's decades-long fascination with Napoleon was that the latter was not an aristocrat, that he was the "little corporal" who had conquered Europe by his own efforts. "He admired Napoleon's ascent from such a low beginning," remarked a French officer he befriended in 1809. "It suited his democratic ideas." On the other hand, Napoleon's crowning himself Emperor certainly did not suit Beethoven's ideas, as we know from the anecdote of how he furiously tore up the title page of the Eroica Symphony (1803), which he had originally intendedincredibly, given the political repression in Viennato title Buonaparte. "So he is nothing more than an ordinary man!" Beethoven raged. "Now he too will trample underfoot all the rights of man"and become a tyrant!" And yet twenty years later, in the thick of the Restoration, his views had softened: "earlier I couldn't have tolerated him [Napoleon]. Now I think completely differently." However bad Napoleon was, he wasn't the despised Emperor Francis IIor, even worse, Metternich.

The Eroica is arguably the most revolutionary of Beethoven's symphonies, which may be why it remained his favorite, at least until the Ninth. John Clubbe, author of Beethoven: The Relentless Revolutionary (2019), believes the famous first two chords, which crash like cannon shots, are indeed supposed to represent the cannon fired by Napoleon's armies as they marched across Europe carrying the banner of revolution. "The chords recall the world of the [French] Revolution: exuberant, over-the-top, colossal. They are wake-up calls to jolt [the] somnolent audiences" in Vienna and elsewherefor Beethoven loathed the complacent, apolitical, frivolous Viennese of his day, intimidated by repression and censorship into sybaritic silence. The symphony is full of the techniques of disruption that have come to be considered quintessentially Beethovenian, including sudden dynamic contrasts, extreme dissonance, colossal noise, massive dimensions, density of ideas, bursting of forms and conventions, even an extra French horn to conjure the atmosphere of revolution. All of it together serves to communicate the abiding essence of Beethoven's music: struggle, ending in triumph. It is not mere personal struggle, such as his struggle against deafness; it is collective, universal, timeless struggle, a war against limits, so to speakartistic, creative, moral, political, even spatial and temporal. Gardiner's characterization is apt: Beethoven represents the struggle to bring the divine down to Earth, a struggle he shares with revolutionaries everywhere. (Gardiner contrasts this with Bach and Mozart, the first representing the divine on Earth, the second giving us the music you would hear in heaven.)

Theodor Adorno was surely right when he said, "If we listen to Beethoven and do not hear anything of the revolutionary bourgeoisienot the echo of its slogans, the need to realize them, the cry for that totality in which reason and freedom are to have their warrantwe understand Beethoven no better than does one who cannot follow the purely musical content of his pieces." The man was so political that, by the end of his life, some of his friends refused to dine with him: either they were bored of his constant politicizing or they feared police spies would overhear him. "You are a revolutionary, a Carbonaro," a friend of his wrote in his conversation book in 1823, referring to an Italian secret society that had played a role in various national uprisings. Well past the point that it had become (to his contemporaries) anachronistic, Beethoven kept the Enlightenment faith.

It is beyond the scope of this article to trace Beethoven's hortatory humanism through all its musical permutations, from the bucolic poetry of the Sixth Symphony (he had a nearly pantheistic love of nature) to the "peace that passeth understanding" of the final piano sonata, with the dazzling variety of forms and content in between. We can hardly ignore, however, the one opera he wrote, whether in its initial form (as Leonore) or its final form almost ten years later (1814) as Fidelio (which he wanted to dedicate, much like Lord Byron, to the Greek freedom fighters in their war against the Ottoman Empire). Here was a chance for the great democrat to express his convictions in words, not only music. And the words, music, and plot of the opera are unambiguous: in them "the Revolution is not depicted but reenacted as in a ritual," to quote Adorno.

Related Topic(s): Beethoven; Classical Music Analysis And Criticism; Faith; Freedom; Love; Music; Music Therapy; People; Revolution; Spirit; (more...) World, Add Tags  (less...)
Add to My Group(s)
Go To Commenting
The views expressed herein are the sole responsibility of the author and do not necessarily reflect those of this website or its editors.