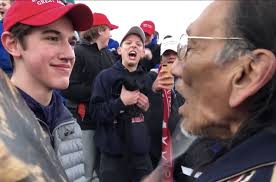 Did you see this?

It's a video of the mob group of neo-catholic boys from a private neo-catholic high school in Kentucky who went to the steps of the nation's capital and ended up taunting harassing trying to hang out with a bunch of old guys dressed up like Native Americans. Too bad the old guys weren't in the mood. They just kept banging drums and hollering stuff. (Okay, they were Native Americans. Get over it.) 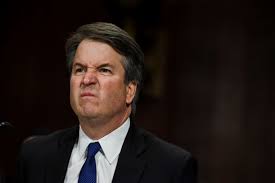 Check out that good-looking young man in the front, proudly wearing his red MAGA hat, grinning like Moses parting the Dead Sea, staking out his ground inside the ground that's already been staked out by the old guy with the drum. What's the problem? Look how intently the young man follows the beat. The silent stare, the rigid face, resentful, flush with sympathetic scorn. This is a kid who already excels in smug self-righteousness, and at such a young age, a position he's been taught to recite in Latin, the simulacra of the smirk lurking beneath an impudent smile.

Before you judge, watch the video. Turn off the talking heads and the spiritual advisors. Turn off the lenders and benders and the knee-jerk defenders. (It rhymes, I know.) Watch the video for yourself and then decide. Who could not see the humor in the boys' harmless game of "Move or We'll Violate Your Space"? Or the wholesome, good-natured fun in a friendly singing competition? Who but a few losers and takers, that's who! Sad! Watch the video. I dare you to say it didn't tickle your funny bone. Because what's not funny about a frenzied group of young white kids berating an elderly Native American healer with threatening right-wing slogans? "Build the wall! Build the wall! Build the wall!" Watch the video.

What you see in this fresh-faced, Trump-loving young man is the inevitable product of a decades-long shift the Catholic church has undergone in moving away from its historical roots in social justice ("love thy neighbor") and into its philosophical and ideological opposite, a postmodern or "neo-catholicism." Make no mistake. What the young man is doing in the video is exactly what he has been taught to do: don't just talk about the cosmic struggle between Good and Evil passed down by your spiritual forefathers. Live the struggle. Put the values you have been taught to believe in to the test. And this is what he did.

Check out that grin. How proud would you be if this were your kid? Yeah, I know. The sky's the limit.

Let me be perfectly clear: if I ever have sons, I want them raised as neo-catholics.

I want my son to be just like the kid in the video. Sunny, smarmy, privileged, uncouth, aggressive. abusive. Someone whose life is taken care of and whose needs are met, whose clothes are cleaned and pressed, whose food is prepared, whose room is cleaned. Someone who looks no further than the end of his nose to see the world reflected in his own image. Someone who has been taught to believe that sympathy and kindness and compassion are signs of weakness. A true believer. A bright-eyed torch bearer in the march against rational thought. Like the kid in the video, I want my son to have what it takes to insult anyone not like him, and then, when captured on video insulting someone, I want my son to have the strength of character to deny what happened, make excuses for himself and find ways to blame others for what he did. Neo-catholicism is the discourse of the day. I want my son to have faith in the superiority of his faith.

And when my son grows up, I expect him to embrace fully the values embraced by other well-known leaders of the movement, like former Speaker of the House Paul Ryan, who repeatedly lied about the effect his tax cuts would have on the poor; or former New Jersey governor, Chris Christie (aka Fat Boy Fat), who insulted the pope (the pope!) while defending right-wing extremists; or Paul LePage, former governor of Maine, who refused to provide health care for 70,000 low-income residents; or Sam Alito, current Supreme Court Justice who publicly accused the president of lying about the political effects of Citizens United. (Fact check: it was Alito who lied.). These men are loyal practitioners of "neo-catholicism," public servants dedicated to implementing policies that reflect the true nature of Christ's teachings. Such as:

Do unto others before they do unto you. Aid and abet the ruling elites: you never know when you might need a friend. Give thanks for eternal war, that it should ever keep the rabble cowering in pews. Praise the thief, the cheat and the criminal, for they are the bounty of the earth. Bless mass murder, mass bombings and mass incarceration, for they are avatars of peace. Take from the poor and give to the rich. Cheat homeowners, ignore climate change, and poison drinking water everywhere. Above all else, demonize the poor, the aged and the infirm, for they will inherit nothing but the whirlwind anyway, nor will they enter the golden palace glittering in the sky beyond all imagination, a fantasy concocted for fools.

In a word, neo-catholics reject outright the "good news" of the New Testament in favor of Iron Age traditions that emphasize cruelty, hatred, violence, greed and war. Because that's what Jesus would do.

(Hey, Father Franky, you vicious little culture warrior! Good thing you don't have a vagina! Hi there, Antonin. Bet you're hoping like hell god ain't gay! What's that, little Timmy Dolan? Don't even think about casting out those demons! And no, we haven't forgotten about you, either, Bernie Law. May that malicious god of your own making receive you in the same spirit in which you received the children of Boston.)

And speaking of growing up neo-catholic, doesn't that kid in the video with the smirk and the red MAGA hat look a lot like a pimple-faced version of Brett Kavanaugh, the "I like Beer" jurist who recently slithered his way onto the Supreme Court? Talk about a blueprint for the proper upbringing! It's as if these two spent their entire academic lives locked up in private, neo-catholic institutions, where science, history and math were discarded in favor of "boofing," "ralphing" and the "Devil's Triangle." Wild, unsupervised parties on weekends. Collaring women, getting them drunk, locking them in a room, forcibly holding them down, physically assaulting them - and then giggling like Gummo when one of them escapes. (One of "them" will testify under oath she felt like she was going to be killed.) These are Reagan-era manifestations of white male neo-catholic privilege.

Related Topic(s): Catholic; Faith; Kavanaugh Confirmation; Kavanaugh Lies; Kavanaugh Nomination; Muslims, Add Tags
Add to My Group(s)
Go To Commenting
The views expressed herein are the sole responsibility of the author and do not necessarily reflect those of this website or its editors.