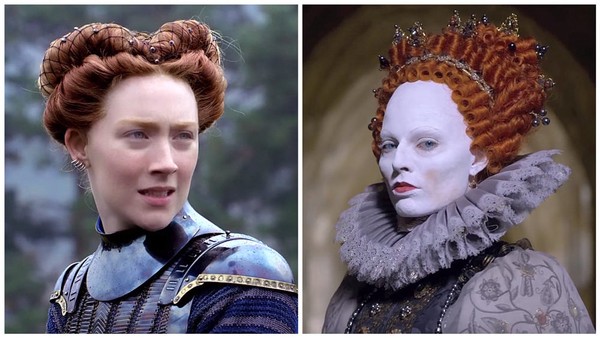 In "Silly Film Olympics, Part III," The Favorite and Mary Queen of Scots are hereby submitted for consideration, two award winning historical dramas that feature three British monarchs as the central figures, all of whom happen to be women. Not to worry, though. They might as well have been about chambermaids or insurance agents for all it matters. While drawing loosely on real-life actions and events, the films do no more than dress the female rulers in all-too-familiar (and wholly demeaning) tropes. In the former, women's struggle for political and social power is defined almost entirely in terms of their sexual relations; in the latter, women are once again wedged into "virgin / whore" cliche's, only here it's the virgin who enjoys sexual relations and the whore who turns out to be a bit of a prude. Worthy nominations, indeed.

Where have you heard this one before: "She was the best of queens, she was the worst of queens" --- ? Okay, maybe never. But the "she" in question is Anne, Queen of Great Britain and Ireland from 1702 to 1714, the last British monarch from the House of Stuart and one of the main protagonists in the 2018 film, The Favourite. Most 18th-Century scholars have dismissed Anne's reign as mediocre, yet her biography reveals a capable administrator who achieved a number of major accomplishments at home and abroad. The Queen, historian Caroline Harris writes, "played the harpsichord and guitar, danced and performed in court theatricals, promoted the opera, spoke fluent French, quoted poetry from memory, appreciated architecture and painting and mastered political oratory." No matter. The folks who made this film run her over with a truck --- and then back up! (Variety calls the film "gender-fluid." Tee hee.)

According to Historic UK: "The reign of Queen Anne was a brilliant one . . . Swift, Pope, Addison, Defoe and Steele were writing poetry and prose, Sir Christopher Wren was finishing St. Paul's Cathedral, and Locke and Newton were propounding their new theories . . ." According to the film, Anne was a derelict ruler too sickly to manage the affairs of state and constantly deferring to others to run things, in particular her close confidant, Lady Sarah Churchill, Duchess of Marlborough.

History: Anne was actively involved in mitigating the deadly disputes between protestant England and Catholic Scotland, which eventually led to her signing the Act of Union into law in 1707. The result was peace in both countries, religious tolerance, a robust economy and the "expansion of markets." Film: Anne is more concerned about a collection of rabbits than her kingdom, treating foreign military adventures as bothersome trifles while tending to the rabbits as if they were her deceased children. The metaphor is a complete fabrication, but the idea it puts into play fits nicely in a film that parodies powerful women as hysterics driven by emotional insecurities. Like any grieving mother, the Queen even gives them names.

History: Anne was a "faithful and devoted" wife to Prince George. In the 25 years they were married (1683-1708), she suffered through 5 stillbirths, 7 miscarriages and 5 actual births, though four of the children died within months and one died at age eleven. Lost in all this heartbreaking tragedy is the fact that she was having quite a lot of sex with her husband. Film: Anne was a closet lesbian.

To be clear, there is no evidence that Anne had sex with women. There is, however, evidence that Lady Sarah was directly involved in publicizing the rumor, and that she did so shortly after the Queen had banished her from court. Revenge, anyone? As Valerie Traub writes in The Renaissance of Lesbianism in Early Modern England: "Although this scandal features prominently in biographies of the Queen, the charges are generally dismissed as the vindictiveness of a power-hungry Duchess" (157). Got that? The accusation was a lie spread by a disgruntled former employee. So of course the filmmakers go with door number two and happily tease the initial falsehood into a feature-length smear. Since a woman's power is her sex, and since Anne, Sarah and Abigail are all women, it follows that they must use sex in order to maintain power. Or social standing. Or income. Or whatever. "F*** me!" the Queen demands, and with these two words viewers get a glimpse into the murky depths of the patriarchal unconscious. Maybe two women having sex on screen will help "get guys" into the theatre. Maybe titillating the male gaze was the point all along. Female nudity? Leather and spikes? Now that's "gender-fluid"!

Who did this film? The MSPs from Holyrood? They should've just titled it, "Revenge of the Neo-Catholic s; or, How I Learned to Stop Worrying and Love the Vatican," and let it go at that. What were they thinking?

Mary, the French-raised, absentee-Queen of Scotland, is a devoted Catholic determined to return England and Scotland to papal rule. She is a descendant of the House of Stuart, which makes her not just a religious threat to the current English monarch, but a political threat as well. She returns to Scotland (1561) barely three years after the reign of Bloody Mary (1553-1558), another fanatic who attempted to reassert Catholic control, and with disastrous results. (Trivia question: why is Thomas Cranmer's right hand important?) She is caught on three separate occasions plotting to assassinate Elizabeth and put herself on the throne (Ridolfi, Throckmorton, Babington), for which she is eventually tried, found guilty and executed on 8 February 1587. Let's re-cast her as the hero of the story, something in the manner of a virtuous female crusader compelled by love of country and faith in God.

So they do. In frame after frame Mary shines as a courageous and resourceful young woman, principled, compassionate, tolerant and forgiving. She is supremely confident in her abilities and secure in the knowledge that God intends for her to rule Scotland, just as He intends for her son, James I, to inherit both English and Scottish thrones. Her saintly, make-up free countenance begins and ends the film, the face of modesty and simple human dignity. Softly lit halos, background lighting, low angle shots and close ups work to package her as the cinematic embodiment of her namesake. Both are "virgins" who give birth.

The problem? The Mary in the film isn't even Catholic. She enjoys oral sex, for example, which is to say she enjoys sex outside the act of procreating, a "grave" violation of Catholic teachings. How about homosexuality? The Mary in the film appears to accept it, even celebrate it. She tells her male companion, David Rizzio: "Be whoever you wish with us! You make for a lovely sister!" When Rizzio tearfully apologizes for sleeping with her husband, Mary tells him not to worry: "You have not betrayed your nature." Uh, wrong. He is a gay man. His nature is to have sex with other men, which, according to the Catechism of the Catholic Church, is an "intrinsic disorder" and very much "unnatural." Either the filmmakers are ignorant of church policy or they've intentionally constructed their tale around toxic bits of Catholic propaganda.

Then there's Elizabeth I (1558-1603), arguably the most important, the most successful, the most powerful monarch in British history, a staunch Anglican who presided over an age of unparalleled advancements in art, music, science, poetry, drama and literature. It bears her name: The Elizabethan Age. Let's recast her as a bitter, frustrated, weak-kneed bobblehead fixated on unfavorable comparisons to her cousin: "I was jealous. Your beauty. Your bravery. Your motherhood" (emphasis added)! This from the woman who famously said, "I will have but one mistress here and no master." Let's make her the Joker to Mary's Batgirl, complete with slopped on white-face and red lip gloss. It gets worse.

To dramatize what happens to a woman who denies her nature --- that is, who refuses to get married and have children --- the filmmakers throw in a hilarious high angle shot of Elizabeth sitting on the floor, looking confused, disheveled, legs spread wide apart, mindlessly fingering through paper figurines like Jack Torrance banging away on his typewriter. The message? She can make inanimate objects but not babies? Then there's the equally amusing reverse angle shots between Elizabeth's shadow, the outline shaped as if she were pregnant, and her looking at her shadow, lovingly, wistfully, as if she can only pantomime what she secretly desires most.

Keep in mind, this is the same woman who rode to Tilbury on the eve of the Spanish Armada to stand with English troops: "I know I have the body but of a weak and feeble woman . . . but I have the heart of a king!" she declared. "I myself will take up arms!" Yet over and over the film presents her as a defective woman, an imposter, a heretic and "servant of crime." She is very much the symbolic whore excommunicated by Pope Pius V and cursed by God with a barren womb. Force-fed Neo-Catholic revisionism? Not if you believe a child-less woman is unnatural.

Hail, Mary! Queen of Scots! "Blessèd be the fruits of thy [silly film]"!

Related Topic(s): God; Partisan Religion; Women, Add Tags
Add to My Group(s)
Go To Commenting
The views expressed herein are the sole responsibility of the author and do not necessarily reflect those of this website or its editors.