Leave it to that celebrated American statesman, George W. Bush, to give eloquence to the thought: "Fool me once, shame on you. Fool me . . . you can't get fooled again."

(It's possible the ellipsis indicates W. was momentarily transported back to his frat-boy party days, about which he and a pack of paid sycophants have managed to fool everyone for a very long time. He was free and easy back then. Ask Dan Rather. And, as we all know, W. likes to party almost as much as he likes to lead. Because he's a leader. A leader of the party. A party leader who leads by partying. Like when he partied us into Iraq. Which by the way ain't broke. So party on. Even though democracy is messy and stop with all that "bin Laden determined to strike inside US" stuff. It's un-party-like. "Now, watch this drive.")

Speaking of getting fooled, what sane person would ever vote for Hillary Clinton for president? Honestly, wouldn't that be like voting for Barack Obama in 2008 all over again -- as if his presidency had never happened -- as if we hadn't already experienced the deceitful pirouette from populist rhetoric to corporate governance. What idiot would allow herself to be conned into voting for someone who says one thing but who does the opposite, after having been conned into voting for someone who said and did the exact same thing once already? 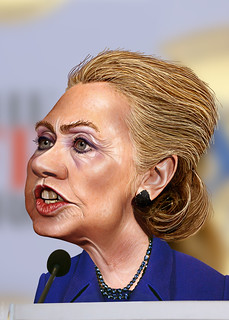 It's not a hard question to answer.

Then again, we're talking about a culture that openly celebrates violence, excuses rape, dismisses economic inequality, supports state sponsored murder, thinks universal health care is evil, votes against its own interests, loves wars of aggression and is armed to the teeth, thanks to an unshakable belief in all those massively serious but somehow vague and mysterious Stage 4 threats we keep hearing about on teevee. (Or is it Stage 5? I forget.)

To paraphrase Lacan, this is some deeply screwed-up collective national-neurosis type mind-stuff. A majority of voters seem to be in the grip of an unconscious urge to overcome the humiliation of an election defeat that inevitably forces them to repeat the very same humiliation in the very next election cycle.

But it's also structural -- this ideological cloning of candidates -- as a quick, 100% accurate and legally binding review of the last four presidential elections shows.

In 2000, voters were equally divided in their disdain for a conservative, corporate-leaning aristocrat and an incompetent, silver-spooned sociopath, both from the South. Neither would challenge the economic or social inequities that plagued the country. Thankfully, voters were saved from the threat of democracy when the Rehnquist Court stepped in and squashed the Florida recount. Nothing to see here. Move along.

Can you say pattern?

Ah, but then, in 2008, the game appeared to change. Voters had a candidate who actually talked like a populist, on one side, and cranky old John McCain, on the other, a guy known mostly for wanting to blow things up, including several of his own planes, but mostly he wanted to bomb Iran. Because it's such a catchy tune. And who doesn't like the smell of napalm in the morning?

The populist won in a landslide. (The land didn't actually slide. It's just that, at the time, when the election results were finally announced, some of us could swear the earth had moved. Young and old were filled with the audacity of hope. )

Related Topic(s): Budget; Culture; Democrat; Democratic; Inequality; Killing; Military; Obama; Power; Presidency; (more...) President; Rape; Republican; Voting, Add Tags  (less...)
Add to My Group(s)
Go To Commenting
The views expressed herein are the sole responsibility of the author and do not necessarily reflect those of this website or its editors.