"Tamar Galatzan...has been the iPad program's most enthusiastic supporter and has never asked the important questions about this planned expenditure of more than $1 billion."
- Los Angeles Times

In 2015, I was a candidate in the election to represent LAUSD School Board District 3. The incumbent in the race was Tamar Galatzan, who was supported by the charter school industry. United Teachers Los Angeles (UTLA) did not endorse in the primary, but Scott Mark Schmerelson, Ankur Patel, Filiberto Gonzalez, and I were all included in an unofficial "anyone but Tamar" strategy. Elizabeth Badger Bartels was also included on the ballot.

In the middle of this campaign, Superintendent John Deasy was forced to quit in part because of his "disastrous" $1.3 billion iPad plan. Shortly after his resignation, the FBI raided LAUSD offices as part of an investigation into the ill-fated project.

Central to the case against Galatzan was her failure to supervise Deasy as he bled the LAUSD's coffers. As noted by the Los Angeles Times, "Galatzan was at times such a reflexively pro-Deasy vote that she neglected to ask key questions about problematic proposals." Specifically mentioned was that "she continued to support [the iPad project] for far too long."
Given this history, the latest California Charter School Association flyer to arrive in my mailbox was particularly reprehensible. According to the CCSA, the "LAUSD is almost bankrupt" in part because "the District wasted a billion dollars on iPads." The article that they reference is dated May 8, 2015. After defeating Galatzan in the general election, Schmerelson took office on July 1, 2015. The only way that he could have done anything about the iPad debacle would have been to fuel up the flux capacitor and accelerate the DeLorean to 88 miles an hour.

In the 2015 election, over $1 million was spent in the failed attempt to help Galatzan keep her seat, much of it by the charter school industry and their supporters. Reed Hastings, whose name also appears on the flyer in support of Koziatek, donated $1.2 million to the "PAC that [backed] the slate of Rodriguez, Lydia Gutierrez, and Tamar Galatzan." Another funder of the flyer, Jim Walton, provided $225,000 to the charter PAC in support of Galatzan. In 2017, charter school supporters spent $622,536.89 helping Monica Garcia, another Deasy supporter, to keep her seat. Did the people behind this spending suddenly develop concern over iPad spending during the 2020 elections or are they just taking advantage of an electorate that is rightfully outraged about the scandal but does not realize their board member had nothing to do with it?

We should be modeling ethical behavior in our political races for our children, not a "win at all costs" strategy. The lies, deception, and antisemitism used by the CCSA in their attempt to capture control of the LAUSD board and eliminate oversight of charter schools should disqualify the candidates they support. It should also cause the public to take a hard look at the schools that they run. Any organization willing to engage in such unethical behavior is unfit to educate children. 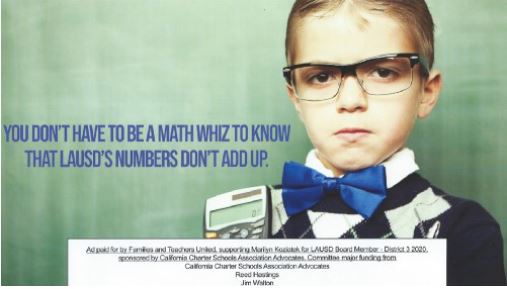 (Image by California Charter School Association)   Details   DMCA
________________________________
Carl Petersen is a parent, an advocate for students with special education needs, an elected member of the Northridge East Neighborhood Council, a member of the LAUSD's CAC, and was a Green Party candidate in LAUSD's District 2 School Board race. During the campaign, the Network for Public Education (NPE) Action endorsed him, and Dr. Diane Ravitch called him a "strong supporter of public schools." For links to his blogs, please visit www.ChangeTheLAUSD.com. Opinions are his own.