"In the congressional races in 2008, the candidate who had more money won more than 93% of the time. Our representatives don't serve us; they serve the people who pay them -- their corporate funders." 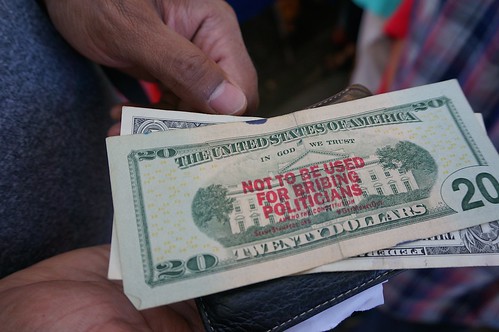 The Republicans passed a tax bill despite the opposition of 55% of Americans. Now in an ass-backward move, they will now rely on conservative groups to plan "a multimillion-dollar effort to sell the GOP's tax cut law". These efforts include the Koch brothers launching "a multimillion-dollar push next year", a GOP super PAC spending "$10 million to protect House members" and the Committee to Unleash Prosperity spending "the majority of its $1 million annual budget selling the tax plan". The success of this plan relies on the American people forgetting that the law could add "$2.0 trillion to $2.2 trillion (before interest)" to the deficit, purposely punishes the citizens of Blue States, and is crafted in a way that "nearly two-thirds of the benefit [go] to the richest fifth of Americans in 2018." The key to enabling this amnesia is the (perhaps inflated) reductions to withholding rates that will take effect in February, distracting the middle class from the fact that by 2027, 53% of Americans will pay more taxes under the new tax scheme.

The fact that Republicans would pass a bill over the objections of their constituents with the hope that they would be granted forgiveness later shows that they fear their donors a lot more than the voters. After all, the top .01% (no, that decimal point is not misplaced), whom the law benefits the most, provided 41.8% of "publicly disclosed donations" in the 2012 election cycle. Add in dark money and "the megadonors' actual share of total political spending is [almost certainly] even higher." Keep them happy and they will provide the means to make your electorate forget your betrayal.

"Yesterday, as the news media discussed the killings in Texas, I heard one analyst say that a lot of this is because we have legalized bribery in Washington; the NRA controls what is going to happen with gun control. Unfortunately, on this Board, we have the same thing with the CCSA. They are participating in all these conversations but nobody elected them."

Of course, the purchase of elections is not limited to national elections. In Los Angeles, education "reformers" have provided 11,459,786.26 reasons for the LAUSD School Board to ignore the will of parents and students. In the latest example, the District, which is teetering on the edge of bankruptcy, spent $250,000 to survey parents and staff about the preferred start date for the school year. Of those parents expressing a preference, the majority wanted a return to the traditional calendar that starts after Labor Day. Instead, the Board voted to start school next year on August 14. If they were not going to listen to the poll that they commissioned, why did they spend the money conducting the poll? Would it be cynical to assume that it had to do with the fact that the "reformers" who advocated moving the start date also provide the majority of funding for the costliest school board races in the country?

While local races in Los Angeles do have strict spending limits and reporting requirements (Board member Ref Rodriguez is facing trial for not following them), spending for independent expenditures is unlimited and where the real action is. Even worse, the contributors to spending late in the race are not reported until months after voters have cast their ballots. As a result, incumbents avoid debates, the majority of campaigning is done through the mail and paid volunteers to knock on doors pretending to represent grassroots support. What is noticeably missing is an actual discussion of policies.

The natural inclination is to react to a broken system by refusing to participate. This is reflected in the fact that 11.45% of Los Angeles voters turned out for the March primary. However, in the absence of real campaign reform, this works to the advantage of those who have taken control. After all, their supporters are highly motivated to show up to the polls to push their agenda. Instead, the citizenry needs to commit to showing up for every election as an informed voter. This means moving past glossy flyers to researching candidate information for yourself.

The alleged crimes of the indicted LAUSD Board member did not occur out of the public's sight. In fact, one news outlet reported on them in detail in the heat of the campaign. The electorate just did not take notice above the din caused by unsubstantiated personal attacks on his opponent. Is this how our Founding Fathers envisioned a government based on democratic ideals?

Related Topic(s): Campaign Finance Reform, Add Tags
Add to My Group(s)
Go To Commenting
The views expressed herein are the sole responsibility of the author and do not necessarily reflect those of this website or its editors.