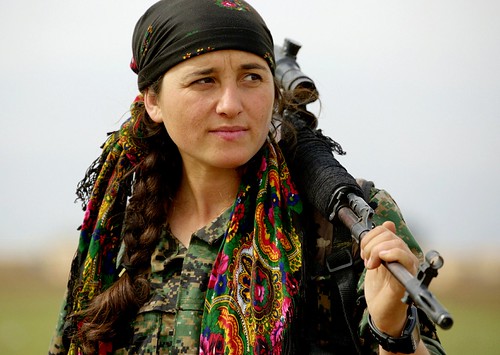 "The miraculous garden of Karam Baba is hidden behind walls pock marked by mortar shrapnel and large caliber bullets, along with a few scars made from handgun projectiles; one from a suicide, another from an honor killing and six more from the hastily assembled assassination of supposed traitors. Karam comes out very early each morning, much before the sun has risen, and prunes back any stems or limbs or blooms that are about to breach the top of the wall.

Karam's walls are high, one and a half times the height of a man. It is thought that the place is uninhabited. The superstitious and the devout stay away. The walls are adorned with the faded and vandalized painted words of Christ--the family that built the compound and lived within its walls for many years were Christian Missionaries. Local lore also has it as a long remembered place of a gigantic ancient olive tree inhabited by Jinn. The Olive tree is long gone but Karam is thankful every day that the memories of the Jinn are not.

It has been seven years since Karam buried his wife and two small children in this courtyard of the abandoned residence; he rightly assumed that no one would venture into the haunted plot of land. He promised them that he would never leave. Thinking he too would die there soon.

One early morning as he said his prayers and ate the last of the dates he had brought with him, a loud erratic whistling sound came rushing in from the West. Then a powerful concussion knocked him violently sideways into a jagged iron grate leaning against a bicycle with no tires or handlebars, leaning against a rubble blocked door, opening slightly the door. Rising to his feet, blood obscuring his vision, he frantically shuffled out into the courtyard to check on the state of his family's graves. Thankfully they were untouched, strewn with rock and soil and bits of something woody, but safe. Kneeling there, thanking God, he suddenly felt his knees and feet becoming cold, wet.

Wiping the blood from his eyes he nervously scanned the courtyard. There in the very middle, crystal clear water was bubbling from the crater left by the errant mortar shell. The shell had landed on the precise spot where the ancient olive tree once stood. The long closed spring had been the reason the tree had become such a large, magical feature on the land. Karam wept, then panicked what if the spring water was to seep under the massive old gates or under the wall into the street? He watched in horror as the water formed quickly moving rivulets -- remembering an old shovel with a broken handle in the petrifying pile of the old missionary's belongings.

Retrieving the shovel he desperately ran from rivulet to rivulet, building small earthen dams at the walls and the gates with the broken shovel, his hands torn and bleeding -- the courtyard slowly filling with cool, clear water. He ran and built an earthen levee around the graves of his family. Then suddenly, the water started to recede, the long parched earth thirstily drinking it up, the cool clear water finding the dormant seeds of jasmine and pomegranate and chick pea and mallow and date palm and saltwort and tomato and poppy and lentil and squill and eggplant and fig and plaintain and..." From "The Garden of Karam Baba" By Franklin Cincinnatus

Related Topic(s): Gardens; Kurds; STUPIDITY; Story; Syria; Syrian Kurds; War; Wars, Add Tags
Add to My Group(s)
Go To Commenting
The views expressed herein are the sole responsibility of the author and do not necessarily reflect those of this website or its editors.