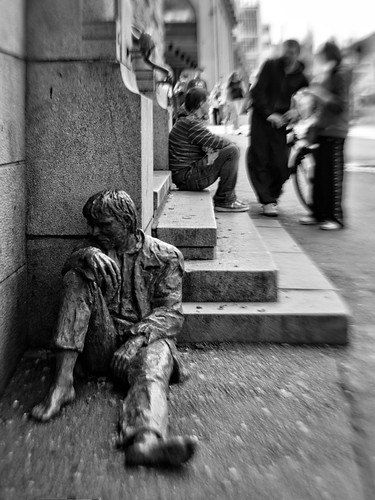 They gave him OxyContin for his pain.
(Image by Anne Worner)   Details   DMCA
>

This writer's friend Jerry told me a sad tale about his 45 year old nephew. "In 2010 he had major back surgery for a herniated discs. They gave him OxyContin for his pain, and he kept taking it for quite some time... legally. This escalated through time when his body got too used to OxyContin, and my nephew required something stronger. I don't know the details, but soon after he was taking stronger pain killers, and graduated into buying them illegally.

By 2016, my nephew had become even more than a ' couch potato'. He literally was so lethargic, with no exercise at all, putting on lots of weight and sleeping all the time. He developed a bad infection and wound up being rushed to the hospital, being placed for in intensive care for one month. Now he is in a hospital rehab center."

Jerry is really angry at the news of just how many 'Pill Mills ' there are in Florida, where we both reside. "It's big business, and they find a way to do it within legal bounds. For all I know my nephew may have gone this route himself, in order to get the ' High ' he required."

The Intercept website recently ran a great investigative piece on Dr. Scott Gottlieb, President Trump's nominee to lead the Food and Drug Administration. It revealed how Gottlieb (I refuse to refer to him as a ' Doctor', the same way I refuse to call those MDs who work in the ' Pill Mills ') has received significant payments from the opioid industry, while attacking attempts to deter the explosion of opioid ' Pill Mills'.

The piece explained how the FDA has great autonomy in the federal government to oversee manufacturers of prescription painkillers. In 2016 Gottlieb received nearly $ 45.000 in speaking fees from firms involved in the manufacture and distribution of opioids. Mallinckrodt Pharmaceuticals, the maker of a highly addictive generic oxycodone pill, paid Gottlieb $ 22,500 for a speech in London this past November. Prosecutors have charged that the firm ignored its own industry ' red flags ' and supplied as many as 500 million suspicious orders in Florida for its oxycodone product between 2008 and 2012.

Mallinckrodt agreed to settle and pay $ 35 million while admitting no wrongdoing. Gottlieb was retained as a speaker for the Healthcare Distributors Alliance, a trade group for the largest opioid wholesale distributors in America, just this past September. One member of this trade group's executive committee, Cardinal Health ( whose CEO is the HDA chairman) temporarily lost its license to distribute opioids from its Florida warehouse in 2012.The Drug Enforcement Administration found that the company supplied several so called ' Pill Mills ' that routinely filled inappropriate prescriptions for oxycodone.

Gottlieb, at the time of these events, quickly condemned the DEA saying that it had overstepped its bounds, and should lose its authority to police the opioid market. He argued that the DEA should not treat Big Pharma like street drug dealers. He said: "So Cardinal isn't a Colombian drug ring. Its CEO isn't Pablo Escobar." Tell that to my friend Jerry and his still addicted and hospital bound nephew.

Gottlieb, Trump the idiot's choice, according to Senator Ed Markey (D- Mass) "Wants the FDA approval process to move faster, and that the FDA has too high a standard for safety." Well folks, as Sgt. Joe Friday said it best in Dragnet: " Just give me that facts". The opioid crisis claims more than 16,000 lives from overdose deaths every year. The crisis has been exacerbated by the 'over- prescribing phenomenon', which is helped by industry efforts to court MDs and of course use of (successful) deceptive marketing practices.

Turn on the boob tube (with more and more Big Pharma ads each and every day) and see how we as a people are mesmerized by painkillers to be part of our daily lives. Can anyone out there even realize that we Americans consume almost 81 % of the global supply of oxycodone products? The real sad fact is that many heroin addicts are folks who were first addicted to painkillers before graduating to the Big H. Having a jackass so called ' MD ' like Gottlieb in charge is the same as the 'Fox guarding the henhouse.'

Related Topic(s): Drug Abuse Alcohol; Drug Trafficing; Drug War; FDA; Government; Oxycontin, Add Tags
Add to My Group(s)
Go To Commenting
The views expressed herein are the sole responsibility of the author and do not necessarily reflect those of this website or its editors.