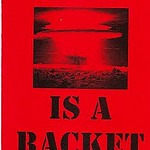 War is a Racket
(Image by earthlightbooks)   Details   DMCA

When the Bush/Cheney gang was in control, the 'bought and paid for' Congress kept allotting more and more billions (over 50% of our federal tax dollars) for military spending. You see, it really did not register in the so called 'Defense budget' because it was slotted as 'Discretionary spending', thus the scam.

We protestors would stand on a busy street corner of our town each and every Tuesday during rush hour because of the illegal and immoral invasion and occupation of Iraq. Congress kept voting for more and more Supplemental military spending ( as they labeled it) destined for the Pentagon's continued 'War of Terror' in Iraq and Afghanistan.

Republicans and Democrats in the two party--'One Party'--Congress kept taking our tax dollars and throwing them down the rabbit hole. The only people who benefited from this were of course A) The contractors who got hundreds of billion$ from Uncle Sam to either keep the war going or to rebuild the infrastructure of the two nations that we destroyed, or B) The fanatical jihadists mixed in with the insurgencies in Iraq and Afghanistan who got the greatest recruiting PR possible from our destructive attacks and invasions... oh yes, and our use of torture to the Nth degree.

In 2011, after Mr. 'Hope and Change' was 'handled' as Commander in 'Grief', guess what: Military spending soared to almost 56% of our federal taxes. Imagine how we could have had a 'Medicare for All' public option that Obama turned his back on in 2009 for 'lack of funding'.

To the Pentagon and the War Economy it matters not which of the two phony political parties occupies 1600 Pennsylvania Ave, or which party controls the Congress. They're all owned by what Eisenhower himself (too late of course) labeled in 1961 during his farewell address: The Military Industrial Complex.

The easiest way to get the 'sheeple' to follow the pied piper is to propagandize a threat to their existence. After it is drummed into their heads long enough, they will forget about their immediate needs and march with flag and banners waving. It worked for awhile with Korea and Vietnam, and then in spades with Iraq 1 and Iraq 2. What was resolved in all these instances was a draining of our treasury... and the loss of lives on all sides!

This writer has had firsthand experience with the scam that is now the Federal Emergency Management Agency (FEMA). Without even needing to look at the figures, one can deduce that FEMA does not have the budget to help the millions who are in need after disasters strike. It has become a public relations scam and patronage mill instead of a government agency that should help those either without insurance or with inadequate insurance. The same goes for that disgrace in not just Flint, Michigan regarding lead filled water pipes and impure drinking water, but in thousands of small towns throughout. If our federal government did not spend so much of our tax money on phony wars and bloated military spending (with around 1000 military bases in over 100 countries), our states and cities would have the needed infrastructure repairs and safety nets. All that our previous presidents (and now Trump) have done is to keep increasing this 'War Economy' until things at home just implode completely!

We never belonged in Southeast Asia in the 50s and 60s. We never belonged in the Middle East in the 90s or 2000s... period! When the day comes that many of our friends and neighbors stop drinking the Kool-Aid of this 'War on Terror' and realize that they have been bamboozled for generations... we can maintain our strength as a nation by keeping the hell of what George Washington warned about: 'Foreign entanglements'. The America that many of us love has never been the 'Policeman of the world' ; rather it has been the 'Goon squad' for its corporate masters.

{Philip A Farruggio is son and grandson of Brooklyn, NYC longshoremen. A graduate of Brooklyn College ( class of '74 with a BA in Speech & Theater), he is a free lance columnist posted on World News Trust, Nation of Change Blog, Op Ed News,TheSleuthJournal.com, The Intrepid Report, Information Clearing House, , Activist Post, Dissident Voice, Counterpunch and many other sites worldwide. Philip works as an environmental products sales rep and has been a street corner protest activist leader and Green Party member since 2000. In 2010 he became a local spokesperson for the 25% Solution Movement to Save Our Cities by cutting military spending 25%. Philip can be reached at PAF1222@bellsouth.net

Related Topic(s): America; Democrats; Iraq; Military; Pentagon; Protest; Republican, Add Tags
Add to My Group(s)
Go To Commenting
The views expressed herein are the sole responsibility of the author and do not necessarily reflect those of this website or its editors.