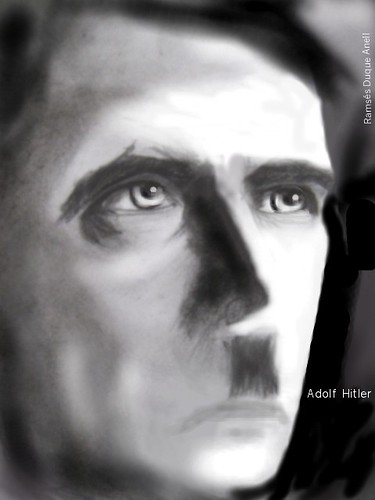 In Joachim Fest's fine biography of Adolf Hitler, aptly titled Hitler, we learn many things never before taught in our World History classes here. To delve into it now with the needed detail from this 700+ page masterpiece would be futile for me the columnist. There is just so much to digest and comprehend about this Austrian of little education and no professional calling who became the Fuhrer.

Yet, throughout the book one cannot help but realize just how much the movers and shakers of our Amerikan Empire copied tactics and outright propaganda from the Hitler gang. The use of the term Fatherland to describe Germany rings so close to post 9/11 Amerika's choice of Homeland as in Homeland Security.

Ever since 9/11 and our subsequent invasions and occupations of Afghanistan and Iraq, each time there is a major sporting event they spread out the giant American flag and trot out the honor guard to sing our national anthem. The real connivance is how they always show us American GIs dressed in camouflage, as if they just came from the battlefield. Check out the Nuremberg rallies and see the torchlight parades and honor guards with their brown or black shirts and swastikas throughout.

This mania to salute soldiers who had no business being sent to the Middle East to invade, kill, be killed and occupy foreign lands is sadly congruent to what transpired with Germany's attacks and occupations of most of Europe. Yet, throughout history this is exactly what empires have done. Why should ours be any different?

Hitler was a masterful genius, who had the good fortune, after much manipulation and scheming, to become Chancellor at perhaps the eleventh hour. Fest explains in his book how the nationalist coalition (which the Nazis were part of) could have formed a legal blockade to thwart Hitler's plans. Yet, the fear of many from Germany's right wing and centrist political parties, and even some left of center ones like the Social Democrats (forerunner of today's US Democratic Party) believed, as Hitler himself stated: "One year of Bolshevism would destroy her (Germany)."

The interesting thing is how Hitler used phrases and ideals that many of our current right wing have (copied?) been using: "Christianity as the foundation of our national morality, and the family as the basis of racial and political life." He promised to eliminate class struggle and to restore 'traditions of honor'. Sound familiar?

What really cracks me up, as a resident of Florida, is the slogan used by the ultra-right wing cad, Governor Rick Scott, in his successful campaign for re-election: "Let's get to work". Newly appointed Chancellor Adolf Hitler, soon after his ascension, travelled around Germany giving hundreds of "Let's get to work "speeches to German labor. Sadly, as with the Nazi party in the early 1930s, working stiffs here in Florida, many with not a 'pot to piss in', voted for this clown.

Why are we, as a nation, in such a sinking ship? Well, the propaganda has been nearly as masterful as that of Goebbels and his crew. We are a nation, as the late Gore Vidal aptly labeled us, at Perpetual War. We spend over 50% of our federal tax revenues on the military. We invaded Iraq in 2003 so as to ' fight them there so they don't come here'. Remember that? Now it is ISIL or ISIS, who, like the original mujahedeen that became Bin Laden's Al Qaeda, Amerika financed and nurtured so as to fight one of our enemies.

This writer has many acquaintances who consider themselves 'right wing'. They sing that same song: "We're fighting them there so they don't come here". Will it ever end? We have states so broke and overloaded with needs that they now want to become legal bookmakers on sports betting. Why do you think Colorado and Washington opened marijuana stores, because they are so progressive minded? Come on, it is to raise tax revenues. Of course, this writer would rather see that then legal bookmaking or the stupid lotteries, which attract mostly low income folks who could use that money for more important needs.

So, we have a nation filled with our citizens working dead end jobs for lousy pay, living in corporate owned and operated rental housing. Of course if they are lucky, they could find a home to rent from some predator who bought it on the cheap when it was foreclosed or sold underwater.

Finally, here is how the movers and shakers of this Military Industrial Empire are even shrewder than the Nazi gang. What they did, successfully too, was create and maintain a 'Two Party, One Party' system. They made sure that the two parties, as is the case in the UK, seem to be at each other's throats... and they are on some issues. We know the Democrats will trumpet a woman's right to choose, and gay rights, and even a more liberal immigration policy.

Yet, when it comes to the meat and potato issues that the empire feeds off of, like heavy military spending, bases worldwide, WMDs to the hilt, free reign for big banks, big oil, big Pharma and all BIG BUSINESS, there is little or no difference between the two parties. Look how both Mrs. Clinton and her Democratic Party minions agreed with President Trump over his recent Cruise Missile attack deep within Syria. Look how they all 'drank the Kool-Aid on blaming Assad and the Russians for that (so called?) chemical attack last week.

Herr Goebbels would be as proud of that sort of propaganda as this Empire eats away at our nation's soul. If all those working stiffs out there do not finally 'Get it' and see through the illusions and propaganda... "Sig Heil!!!"

Related Topic(s): Assad; Empire; History; Hitler; Oil; Propaganda, Add Tags
Add to My Group(s)
Go To Commenting
The views expressed herein are the sole responsibility of the author and do not necessarily reflect those of this website or its editors.