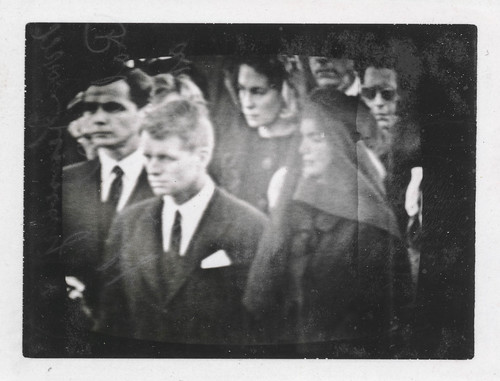 Early in 1968, Clyde Tolson, F.B.I. Director J. Edgar Hoover's deputy and bosom buddy, a key player in the assassination of Rev. Martin Luther King, Jr., expressed both the hope and intent of those making sure that there would never be another president by the name Kennedy, when he said about RFK that "I hope someone shoots and kills the son of a b*tch." Earlier, as reported by Robert F. Kennedy, Jr. in his new book, American Values: Lessons I Learned from My Family, the influential conservative Westbrook Pegler expressed this hope even more depravingly when he wished "that some white patriot of the Southern tier will spatter [Robert Kennedy's] spoonful of brains in public premises before the snow flies."

These sick men were not alone. Senator Robert Kennedy was a marked man. And he knew it. That he was nevertheless willing to stand up to the forces of hate and violence that were killing innocents at home and abroad is a testimony to his incredible courage and love of country. To honor such a man requires that we discover and speak the truth about those who killed him. The propaganda that he was killed by a crazed young Arab needs exposure.

When he was assassinated by a bullet to the back of his head on June 5, 1968, not by the accused patsy Sirhan Sirhan, who was standing in front of RFK, but by a conspiracy that clearly implicates U.S. law enforcement and intelligence agencies, not only did a precious and good man die, but so too did any chance for significant political change through the official political system, short of a miracle. We are still waiting for such a miracle.

Robert F. Kennedy's death, following as it did the assassination by U.S. government forces of Dr. Martin Luther King two months earlier, marked an emphatic end to the sense of hope that marked the election to the presidency of his brother John in 1960. Henceforth, efforts to change the political system from within became moot; the coup d'e'tat effected on November 22, 1963 with the CIA's assassination of JFK was signed and sealed. RFK's murder added the period to this sentence of rule by murderous deep state forces. And despite valiant efforts of dissent from outside the system since, the systemic war machine has rolled on and the economic stranglehold of the elites has tightened over the decades. An RFK presidency was this country's last chance from within to save itself from the tyranny that has ensued.

We now live in a country that would be unrecognizable to anyone who died prior to 1968. All protest has become symbolic as the American Empire has expanded abroad through countless ongoing wars, coups and the undermining of foreign governments; civil liberties have been eviscerated; the wealthy elites, ably assisted by a corrupt political establishment, have made a mockery of economic justice; an endless war on terror and a national emergency engendered by the insider attacks of September 11, 2001 and enshrined in public consciousness with the planted emergency telephonic meme of 9/11 have been instituted to justify massive profits for the military-industrial complex; and a new and very dangerous Cold War with Russia has been resurrected to threaten the world with nuclear annihilation. All this and more has vigorously been supported by every U.S. President since, Democrats as well as Republicans, with no exceptions, including the icons of the neo-liberals, Clinton and Obama, who have bombed and droned the world wide, smiling all the way. We live in very dark times indeed. If significant change ever comes to the United States, it will be a result of pressures from without, for the political system is rotten to the core, and almost without exception our political leaders are cowards and liars. This seems obviously true to me, though it pains me to admit it.

Fifty years have passed since RFK's murder, and for those fifty years very few Americans have thought to question what is a conspicuous conspiracy. It is as though a painful exhaustion or a veil of denial set in in 1968, a year in which 536,000 plus American troops were waging war against the Vietnamese and the slaughter was horrendous. Body bags and slaughtered Vietnamese filled the TV screens. Chicago cops rioted and beat antiwar demonstrators at the Democratic National Convention in Chicago. American cities were exploding. Then the "peace candidate" Nixon, together with Kissinger, assumed the mantle of power only to increase the horror. War criminals ruled. It was a year when mere anarchy was loosed upon the world and the truth of Robert Kennedy's assassination was lost in the storm. The manifest truth became latent, and there it has remained for most people all these years. All most people "know" is that RFK was assassinated by a crazy Arab guy. His name? Oh yeah, Sirhan Sirhan or something like that. It was so long ago and, anyway, it doesn't matter anymore.

But it does matter greatly. Unless we choose to remain children forever, children in denial of the truth of their childhood traumas, the truth about RFK's murder will haunt us and poison any hope we still might harbor for our country. Killers seized the levers of power with the murders of JFK, MLK, and RFK (and Malcolm X, Thomas Merton, et al.), and they have never relinquished them.

It is time that each of us decides: Do we stand with the killers or their victims?

Finally a Kennedy family member has spoken out on the case. As reported by Tom Jackman in The Washington Post, May 27, 2018, Robert f. Kennedy, Jr., after studying the case at the instigation of Paul Schrade, RFK's assistant, who was the first person shot that night, and visiting Sirhan in prison, has publicly said that he doesn't think Sirhan killed his father and has called for a reinvestigation of the case, a most mild request. Who will do the reinvestigation? The authorities in the government and press that have covered up the truth for fifty years? Nevertheless, Jackman's article and RFK, Jr.'s statement bring needed attention to the assassination while focusing on the fact of a second gunman and therefore a conspiracy. Its focus is on the ballistics of the case, which are of course crucial.

But I would like to focus on another angle that confirms the fact of a second gunman and a vast cover-up that involves the LAPD, FBI, and CIA, therefore not just asserting the presence of a second gunman, but one in the employ of state forces. So let us look into this brutal murder, with its layers of subterfuge.

Right from the start the conspirators had intricate plans in place just in case questions were asked. Plans to confuse. False leads. Fallback stories. Something far beyond the ken of the 24 year old Sirhan Sirhan. Consider the following questions.

If you were going to arrange a political assassination in an indoor crowded setting, would you have one of your operatives (not the assassin) at the murder site be a strikingly curvaceous young woman in a conspicuous white dress with black polka-dots, and then have her flee the scene, yelling, "We've shot him, we've shot him," so that multiple witnesses would see and hear her as she made her escape?

Would you have the same woman earlier in the day pick up a salesman in the hotel where the assassination was planned, spend the day with him driving around and having dinner together, while repeatedly inviting (i.e. luring) him to join her later that night at a big public event where they will shoot their famous victim, whom she names?

Would you have your operative tell this man that, although she wasn't staying at the hotel, and although she had been in town only three days, having flown from NYC where she had arrived from overseas, that she knew the hotel stair routes very well, including an unobtrusive one that she shows the man?

Related Topic(s): CIA; Conspiracy; Israel; Kennedy Assassination; LAPD; Lies; Robert F Kennedy; Truth, Add Tags
Add to My Group(s)
Go To Commenting
The views expressed herein are the sole responsibility of the author and do not necessarily reflect those of this website or its editors.