Climate change continues to accelerate, hitting the planet harder and harder, and the Arctic north among the hardest of all. Two major catastrophic signs of how fast things are moving in the Arctic--and for the planet as a whole--emerged in July and August. On August 1, the layer of ice covering the country of Greenland melted more in a single day than has ever been recorded, sending 12.5 billion tons of water into the ocean. For the last two months, unprecedented wildfires have burned from Alaska to Siberia, including north of the Arctic Circle. The fires have devastated wild forests and released huge amounts of greenhouse gases that further warm the planet.

The horror of eco-catastrophe accelerates with each passing week. Why? Because capitalism-imperialism, in its ruthless and anarchic pursuit of profit and competitive advantage, not only has ravaged the environment and but is driven to continue to do it, injecting more and more carbon dioxide into the atmosphere in the insane rush for profit that drives it.

The planet is on fire, and nothing but revolution to end capitalism and bring a socialist society as a transition to global communism has any real chance of saving the planet and humanity. This is a revolution whose goal is the emancipation of all humanity, which must encompass the conscious restructuring of humanity's relationship to the rest of nature, as caretakers of the planet and not its plunderers. This can only be accomplished with the overthrow of capitalism. 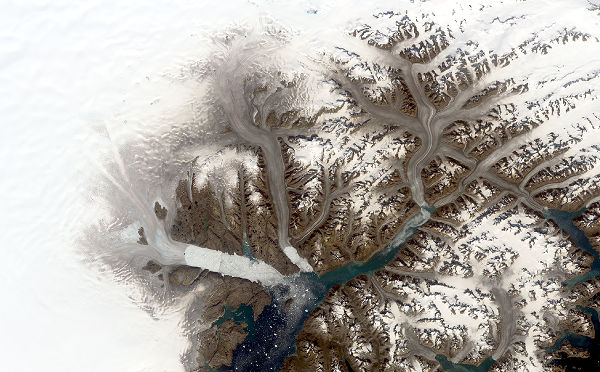 Glaciers in southeastern Greenland including, from left, Helheim, Fenris and Midgard are seen in a Landsat 8 image from Aug. 12, 2019. The glaciers appear brownish grey, which indicates that the surface has melted.
(Image by NASA/Christopher Shuman)   Details   DMCA

At the other side of the planet the Antarctic ice sheet, Earth's largest ice mass, is also melting. A complete melt there would raise sea level more than 200 feet, making current coastlines unrecognizable.

While climate scientists have been sounding the alarm over melting global ice for many years, the current rate of ice loss is much worse than previous estimates. While projections of ice melt are difficult, Xavier Fettweis, a climate researcher at the University of Liège, said that the current models wouldn't have anticipated this rate of melt this month in Greenland until 2070, 50 years from now.

Scientists warn that both the Greenland and the Antarctic ice sheets are already at or approaching what are called tipping points. This means that the changes that have been gradually getting worse could take a leap to a situation where the ice will continue to melt and the planet heat up EVEN IF all the human activity that now contributes to global warming stops. Fully melting these enormous ice sheets (some of which are miles deep) might take centuries but the consequences for both human society and the natural world are immense. We have to stop this NOW or future generations will pay an enormous price.

The Arctic Is on Fire

While the ice sheets melt, wildfires are engulfing large parts of the Arctic, including Siberia, Alaska, Greenland, and Canada. Global warming is a major factor in the increase of wildfires. Summer fire seasons are longer and hotter. This dries the forest, creating more combustible material adding to the size and intensity of the fires.

In Alaska more than two million acres have burned this year. More acres were burned by fires in Alaska this year than by all the wildfires in California during 2018-wildfires which shocked the country and made international news. Fire season in Alaska usually ends by late August, but more than 200 fires continue to burn at this writing. Last week a new major fire, the McKinley Fire, broke out 80 miles north of Anchorage and it continues to fill the city with toxic smoke.

The fires in Siberia are continuing to burn three months after they started. On August 6, Russia's forest service reported that it was actively fighting 161 fires and has given up fighting 295 fires and is simply monitoring them from space.

CNN reported that smoke from the Russian fires has spread over almost half of the country and even reached the west coast of the United States. In the Krasnoyarsk region, 60 miles from one of the fires, a 32-year-old woman holding a baby described the conditions to the website Phys.org, "It feels like it fills your whole body. There is nothing to breathe. We can't hide from it... Children and adults are coughing non-stop."

The fires are not just caused by climate change, they are accelerating the warming process. According to Greenpeace Russia, as of early August the Siberian fires are emitting more than 166 million tons of CO2--nearly as much as 36 million cars emit in a year. Fires in the Arctic are especially dangerous for the climate as black soot settles on the Arctic ice and accelerates its melting since dark colors absorbs light and white reflects it. The fires also contribute to deforestation, another driver of climate change since forests take CO2 out of the air.

Deeper into a Crossroads for Humanity and the Planet

The situation is urgent. False, dead-end solutions like the "Green New Deal" or attempts to channel the people's anger into bourgeois electoral bullshit (#BEB) must be challenged and defeated politically. (See 5 Reasons "The Green New Deal" Is Misleading, Dangerous and Part of the Problem.") They are not "part of the solution--"they do great harm, diverting and misleading people when they need to be confronted with the real problem and the actual way to solve it."

As the article on the Green New Deal says, "There are only two choices: let the planet hurtle uncontrollably towards environmental disaster, and let other horrors continue and intensify such as wars of aggression and the oppression of Black and Brown people, of women, and of immigrants; OR we make a revolution, an actual revolution to overthrow this system of capitalism-imperialism."

Related Topic(s): Climate; Environment; Revolution, Add Tags
Add to My Group(s)
Go To Commenting
The views expressed herein are the sole responsibility of the author and do not necessarily reflect those of this website or its editors.