Of all the tyrants, oppressors, and empires in human history, the U.S. has this distinction: None has caused more misery and carried out more screaming injustices against the people of the world. And none has more massively and systematically propagated myths of "greatness" and "exceptionalism": America the "leader of the free world"... the "shining city on the hill"... the spawning ground of innovation, where you can "just do it."

On the backs of oppressed humanity! 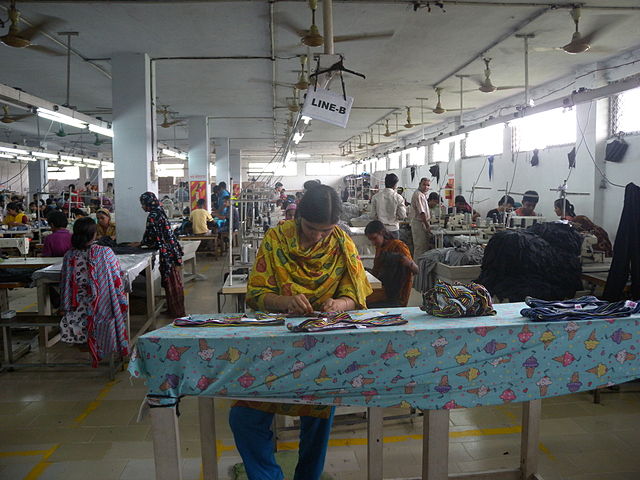 The rulers of the American empire have slaughtered and plundered their way to the top position within the worldwide system of capitalism-imperialism. This is a system of global exploitation driven by the competitive pursuit of profit and more profit and its law of survival: expand or die. It is a system of political and military domination, and of murderous rivalry among the imperialist powers themselves.

If we could look at planet Earth from above with an economic and social telescope, we would see a landscape marked by staggeringly high peaks of controlling wealth and power, by vast valleys of exploited and impoverished humanity, and by a deep faultline between the rich capitalist countries and the oppressed nations of the "Global South."

The imperialists proclaim that their free market opens "ladders of opportunity" for the "less fortunate" on the planet. Unadulterated bullshit. The whole structure of the world system is based on the howling and widening division between haves and have-nots. In 2017, 42 individuals had the same wealth as the poorest half of humanity--that's 42 billionaires and 3.7 billion people. And 82 percent of the wealth generated globally went to the top 1 percent!1 Markers of a capitalist world in which, as Karl Marx described, wealth is concentrated on one end and misery and agony of toil on the other.

The imperialists hail a "brave new world" of 21st-century globalization. What kind of world is this?

Look in Bangladesh, the second-largest garment manufacturer in the world. More than 4.4 million people, mostly women, work in 3,000 garment factories. The current minimum wage is 32 cents an hour (about $68 a month), one of the lowest manufacturing wage rates in the world.2 This is where retail giants like Walmart, Target, H&M, and others flock to "source" their clothing for racks and boutiques--FYI: "source" is business jargon for contracting out the savage exploitation of millions of human beings whose lives count only insofar as they can be profitably exploited.

These garment factories are links in global supply chains. Local suppliers must turn around new designs and meet massive bulk orders quickly--and keep lowering costs under threat of losing their contracts to cheaper suppliers in other countries, like Vietnam and Bangladesh. And so: 14-hour work days seven days a week, criminal neglect of safety, and the push to produce and produce. And so in 2013 the worst industrial "accident" in modern history: 1,100 workers killed and 2,500 maimed and injured in Bangladesh when a building that housed factories filling orders for Macy's, Nordstrom, and others collapsed. A basic human need, for clothing, is met not by directly and rationally organizing an economy to meet that need--but through a system of profit that requires "factories of death." If your shirt could speak, what would it say?

Look in Thailand. With the backing of international financial institutions, Thailand has built up a huge seafood-export industry that provides much of the shrimp for U.S. retail chains and restaurants. It's a convenient arrangement for U.S. capital. You see, subcontracting enhances profits and "flexibility." It frees U.S. capital of the "burdens" of environmental, safety, and labor regulations. You see, Thailand's highly profitable seafood industry employs thousands upon thousands of slave laborers: migrants, children, the disabled, and desperate.3 Costco, Whole Foods, the list goes on, conveniently plead, "We just didn't know."

Look in Mexico, and the savage legacy of the NAFTA economic treaty. No, you f*cking liar Trump, the U.S. was not "had" by Mexico. The U.S. engineered NAFTA to sink its claws more deeply into Mexico and to more tightly integrate Mexico into America's empire, facing new competitive challenges in the world. NAFTA pried Mexico open to U.S. agribusiness, which flooded Mexico's markets with cheap corn and beans... wrecking the livelihoods of peasants who used to grow that food... which forced millions from rural communities to migrate to Mexico's cities and squalid shantytowns to compete for industrial jobs... driving down industrial wages, which are now lower than at the start of NAFTA.

These conditions are a magnet for U.S. firms. They set up auto factories and high-tech sweatshops producing auto and computer parts, airplane components, and consumer electronics, employing workers at one-sixth to one-ninth the wage they would receive in the U.S. This feeds the beast of U.S. capital.

Look in Apple. Somehow, for all its technical wizardry, the iPhone is missing an app for the blood that courses through its production. Some of the tin it contains might be mined in Indonesian mud pits that frequently cave in. The tiny circuits in the phone couldn't function without coltan--a mineral mined in Congo, often by children as young as 10. The phones are assembled in factories in China that are run like prison compounds. For years, the iPhone was assembled at a factory employing 450,000 workers. Starting in 2010, workers who were reaching the breaking point over low wages, unbearable work hours, relentless productivity drives, toxic fumes, and rampant workplace injury decided to protest... by carrying out (or threatening to carry out) suicide jumps from the rooftops of the factory.4 How telling that Steve Jobs, Apple's founder, is the icon of successful enterprise in America.

This IS the World We Live In...

Eighty percent of world trade flows through, and one in five jobs worldwide is linked to, global supply chains. These vast, interconnected networks of exploitation are the backbone of the imperialist world economy.5 They cheapen the cost of the raw materials and parts that enter into production carried out in the U.S. The low-priced consumer goods produced by super-exploited workers in the "Global South" cheapens the cost of labor power in the U.S. Out of these production networks surplus value (profit) is siphoned, concentrated, and distributed upward and upward to the imperialist banks, investor groups, and firms like Walmart, GM, and Apple.6

These grids of production are also the invisible foundation of the "consumer society" of the rich capitalist countries--so utterly irrational and so utterly wasteful that if everyone in the world lived as Americans do, it would take the resources of four or five Earths.7

All this is the "dirty little secret" of that "brave new world" of globalization. It is an imperialist world in which 2.3 billion humans (nearly one in three worldwide) still lack access to rudimentary toilets or latrines; 150 million children are trapped in child labor; and 65 million (the highest number since World War 2) have been forcibly displaced from their homes and homelands by war, poverty, persecution, and the effects of global warming.8 This system is a horror for humanity.

Related Topic(s): Economic; Revolution, Add Tags
Add to My Group(s)
Go To Commenting
The views expressed herein are the sole responsibility of the author and do not necessarily reflect those of this website or its editors.