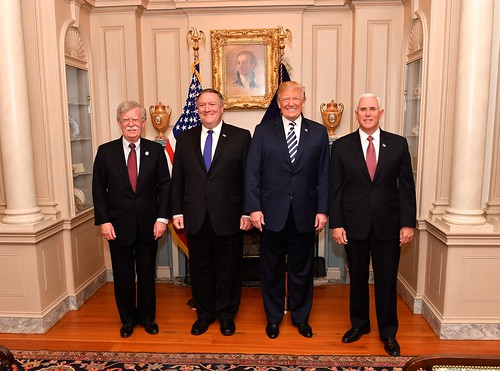 Whereas that by any measure there is a withering lack of personal and state national security benefits accruing to United States citizens and non citizens globally; And Whereas, given that shadowy oligarchical elements as a group have deliberately cloaked and veiled their ownership of rights granted by the people via Article 1 of the US Constitution; And Whereas the constitutional pillars of the legislative and judicial chambers that rest on the foundation granted by the people to these pillars have been perverted to the cause of perpetual war; And Whereas, the face of the Executive branch, has become personified as the amalgamated face of the Trump, Pence, Pompeo, Bolton, Abrams, et. al. Regime; And; Whereas the actions of this Regime as demonstrated through its conduct demonstrates a treasonous and monstrous lack of concern for the health, wealth and welfare of the US citizens, its peoples and others around the globe; And; Whereas individual members of the Regime's sworn oaths to uphold the US Constitution and the rule of law have been discarded and caused an increase in ill will by the people, their neighbors, bullied allies and irritated adversaries; And; Whereas this Regime, abetted by the US congress, federal courts and main stream media acting as tools of the ruling elites instead of the American people, has abdicated its duty to cause debate and declare whether to use US treasure for war; And; Whereas in recognition by the people of the United States that the ruling elites have deliberately hobbled and stricken provisions granted by the people to the US Constitution as the foundation for its of the rule of law; Be it therefore; Resolved that the people of the United States hereby request assistance from other nations and people of the world that members of the US regime and their legislative and judicial cohorts who have approved funding for and advocated for war and who have proposed bodily harm to leaders of other sovereign nations and used rogue law against the people as a basis to establish an illegal form of US government be detained and quarantined until such time that a US Constitutional government may be reformed by the people; And; Be it further resolved that the US military cease all hostilities and stand down on behalf of the American people until such time as a more perfect union shall come to be.

Related Topic(s): Americans For Responsible Leadership, Add Tags
Add to My Group(s)
Go To Commenting
The views expressed herein are the sole responsibility of the author and do not necessarily reflect those of this website or its editors.