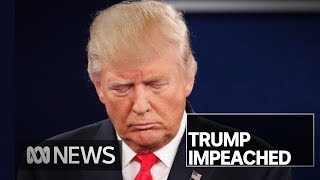 Finally, Trump was impeached on December 18. It is a sad day for America because for the House of Representatives to resort to such an historically rare punitive act suggests that Trump's transgressions have been so severe that the House was compelled to take such a drastic measure. However, the two articles of impeachment -- abuse of power and obstruction of Congress -- hardly describe Trump's repeated blunders, lies, habitual abuse of the power of his office, and obstruction of justice. Indeed, the two articles of impeachment barely scratch the surface of his untamed behavior, which is devoid of any civility and moral responsibility.

In less than three years, the absurd became the norm, ignorance became a virtue, and lying has sadly become the order of the day. He brought shame and dishonor to the most prestigious office in the world -- the US Presidency. His moral lapses, notoriety, vulgarity, and self-deceit are beyond the pale of human disorder.

As much as Trump must pay for his debased behavior which led to his impeachment, it is the corrupt Republican establishment that enabled him throughout the past three years to violate both the letter and the spirit of the Constitution. It is the Republicans not the Democrats that eventually precipitated his impeachment. Whether or not he escapes conviction in the Senate, the Republican party, as much as Trump himself, will be held responsible for the damage they have inflicted on America's democratic institutions, the rule of law, and its global leadership and moral standing.

To be sure, impeaching Trump is more than warranted because even a cursory review of his alarming misconduct suggests that there is more than one word for every letter of the alphabet from A to Z that describes one aspect of Trump's character, as he has brought nothing but shame and disgrace to his office.

Arrogant: To say that Trump is Arrogant understates his propensity to show off his presumed skills as a negotiator, alleged business acumen, and supposed grasp of complex issues. He constantly claims that he is smarter than everyone around him, even insulting the US military by stating "There's nobody bigger or better at the military than I am," and "I know more about ISIS than the generals do. Believe me." He feels empowered when he wakes up to "enlighten the world" with his early morning stream of twisted tweets, which only puts his arrogance and shallowness on full display.

Bigot: Many people refer to Trump as a bigot, a characterization which he owns and certainly makes no efforts to hide. No one has forgotten his outrageous attack on Mexican immigrants, stating: "When Mexico sends its people" They're bringing drugs. They're bringing crime. They're rapists." His bigotry was even more pronounced when he belittled two Gold Star parents of a Muslim-American soldier who died in 2014 while serving in Iraq. By now, Trump has earned the distinction of making bigotry synonymous with his name.

Crude: One does not need to know Trump well to quickly discern that he is a crude man with no scruples, and with a love of name calling and swearing. He referred to Senator Elizabeth Warren as Pocahontas, going so far as to do so at an event honoring Navajo veterans. He regularly calls people "losers," "fools," and "lame," especially on Twitter. Speaking about his former Communications Director, Anthony Scaramucci, Trump decried him as a "nut job" that he "barely knew." This is the real Trump -- behaving like a wild caveman who has long since forgotten the meaning of civility.

Demagogue: Being a demagogue is second nature to Trump; he will say anything, however contradictory and absurd, only to arouse his base. He made a campaign and inauguration pledge to eradicate Islamic terrorism from the face of the earth, knowing that this will never happen. In his inauguration speech, he stated: "Every decision" will be made to benefit American workers and American families...a phony claim, as the tax bill shows. He craves pomp and circumstance, claiming "That military may be flying over New York City and Washington, D.C., for parades. I mean, we're going to be showing our military." Demagoguery, to be sure, became Trump's staple diet on which he feeds.

Egomaniac: For Trump, being an egomaniac fits not only his persona but his perpetually revolting self-praise. Perhaps he still doesn't believe, for good reason, that he is the president and needs constant reinforcement. To show the enormity of his ego can best be expressed by his tweeting that "Time Magazine called to say that I was PROBABLY going to be named "Man (Person) of the Year," like last year, but I would have to agree to an interview and a major photo shoot. I said probably is no good and took a pass..." To this day, Trump continues to boast about the size of his inaugural crowd, insisting that he had a much larger turnout than Obama in 2009. He still can't digest that a smaller crowd attended his inauguration than that of a black president, which irks him more than anything else.

Fraud: Trump is the only president who has committed fraud on such an unparalleled scale. Starting with Trump University, he violated NY laws by calling it a university and operating without an educational license. He charged students $35k a year, promising they would "learn from Donald Trump's handpicked instructors, and that participants would have access to Trump's real estate 'secrets.'" No jobs were offered, and no secret information was shared or revealed because there was none. He filed for bankruptcy four times (1991, 1992, 2004, and 2009) and was repeatedly fined for breaking rules related to his casinos. He was found this year to have used his "charity," the Donald J. Trump Foundation, as an extension of his business and campaign; the foundation was shut down and ordered to pay $2 million in damages to eight legitimate charities. The dictionary might as well define the word "fraud" by citing some of Trump's fraudulent business dealings.

Garbled: If nothing else, Trump is a master of garbled words. Despite his bragging about his own language skills, his garbled words and unscripted utterances are incoherent, such as his description of visiting Napoleon's tomb, saying: "He did so many things even beyond. And his one problem is he didn't go to Russia that night because he had extracurricular activities, and they froze to death." He rambled on about foreign policy, stating "You know, he [Obama] can talk tough all he wants, in the meantime he talked tough to North Korea. And he didn't actually. You look at the red line in the sand in Syria. He didn't do the shot. I did the shot..." Yes, Trump did attack a Syrian airbase, but only after "receiving permission" from Putin.

Heartless: Putting his travel ban into immediate effect, stranding hundreds at airports, blocking off access to the US arbitrarily and more than anything else, putting children as young as two years old in cages is as Heartless and cruel as can be imagined. He endorsed a proposed repeal of Obamacare without plans to provide aid to disadvantaged communities. He has made no effort to renew the Children's Health Insurance Program, ending care for 9 million low-income children, while giving billions in tax cuts to the richest of the rich. He callously ended DACA, which will affect almost 800,000 young adults who came to the US when they were children and don't have a home to return to if deported. Not to speak of the fact that terminating DACA would also lead to splitting up families those who illegally immigrated but have children that were born in the US. If Trump needed a heart transplant, his body would reject any heart which has not already been infused with cruelty and malice.

Ignorant: Trump has repeatedly demonstrated that being Ignorant is a virtue, especially when he pretends to know everything. He suggested that Frederick Douglass is still alive, offering "Frederick Douglass as an example of somebody who's done an amazing job and is getting recognized more and more, I notice." He took pride in the fact that he was tutored by Chinese President Xi Jinping about Korean-Chinese relations at a dinner. That's how a quick learner he is. When discussing healthcare, he stated "Nobody knew healthcare could be so complicated." Of course not. Trump thought that repeating "repeal and replace" is all it takes to resolve America's healthcare problem.

Juvenile: Trump talks, walks, and brags like a Juvenile. He continuously tweets memes that no self-respecting adult would dream of doing his head photoshopped onto the character Rocky Balboa's body; himself awarding a fake medal to the dog injured in the raid on Abu Bakr al-Baghdadi; and his team imagining him as the genocidal villain Thanos from the Avengers films, wiping out his Democratic rivals. Offline, he left this month's NATO conference early after video circulated of other leaders venting about his erratic actions. So, if you walk, talk, and brag like a juvenile, you are qualified to replace Trump.

Related Topic(s): Trump Impeachment; Trump Presidency; Trump Selfishness; Trump Untrustworthy, Add Tags
Add to My Group(s)
Go To Commenting
The views expressed herein are the sole responsibility of the author and do not necessarily reflect those of this website or its editors.