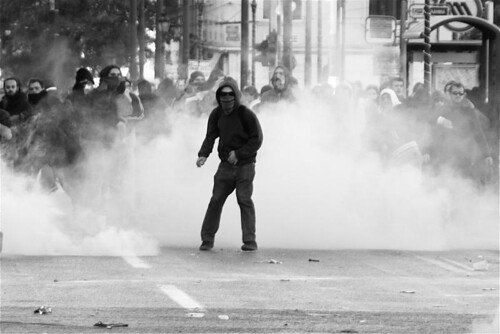 rage
(Image by Murplejane)   Details   DMCA
Anyone else feeling the cold breath of History, On the nape of their neck and smelling of misery? I ask because lately mine is sure stiff, Not from bad posture but rare hieroglyphs Of a prez whose bonafides ain't at all clear, And I wonder if That Day ain't finally here.

It's the day when our anger like the earth's temp, Has reached such a tipping we hold in contempt Police, pols and media and all in between, And grasp at The Donald to make it all clean. At The Donald, of all folks, who traffics in hate, But owes no one nothing and comes with no freight.

Enter ol' Hillary, whose freight fills a train, Her cred having hit the worst used-car plane. She's simply Not-Trump for folks bored by facts, Which like T-shirt sales they mix and they match With the buzz she busted that awful glass ceiling, Shards falling 'round her at the DNC screening.

They weren't real shards, in case you were fooled, But corporate hi-tech by the CGI-schooled: The campaign's thinking was Hill cut up like pork, Could lose Pennsylvania, New Mex and New York. Yes, it's that corporate whiff that Clinton gives off That's red meat to skeptics and makes people scoff.

Hence the appeal of this Donald so savage: He's himself, he's quaint, he just loves to ravage. True too of Bernie who's flop-haired sincere, And cares not a bit for ela'n and veneer. But slick he is not and thus not imperious, Which means that the Sixpacks don't take you serious.

That day'll arrive soon when the new prez innaugs, And points out the "new" path down which we'll slog, With pat-downs and banksters, the scrape for a buck, And vets doing tours that use up their luck. From One-Percent zeal there'll be no refuge, And that's why I say: "After Barack le deluge."

Related Topic(s): 2016 Presidential Election; Anger; History; Satire, Add Tags
Add to My Group(s)
Go To Commenting
The views expressed herein are the sole responsibility of the author and do not necessarily reflect those of this website or its editors.