Grateful Dead. Cairo, Egypt, 1978
(Image by Urbanimage Music Photography Archive)   Details   DMCA
Take a break from all of the stuff going on that we read about here at OpEdnews. To give you some background, here is a comment I posted on an interesting article/quicklink about a neat and interesting place on the Big Island in Hawaii named Puna that has been significantly affected by the volcano spilling lava, posted by Carol R Campbell. The link in the article referred to a Grateful Dead tribute band which brought this back to my thoughts.

If you know anyone in the Grateful Dead tribute band, tell them you know someone who only ever went to one Dead concert, but it is the one that deadheads wish they could have gone to if they did not make it there..

In 1978 I went to a Grateful Dead concert in Cairo, Egypt. I did not travel to Cairo to see the concert, I was working over there. They had a concert three nights in a row and I was able to make it to the last one. The concert was right in front of the Sphinx with the pyramids in the background. The night of the concert I made it to was extra special ... there was a lunar eclipse going on overhead.

Bill Kreutzmann the drummer recalls "Egypt instantly became the biggest, baddest, and most legendary field trip that we took during our entire thirty years as a band... It was priceless and perfect and, at half a million dollars, a bargain in the end. Albeit, a very expensive bargain." 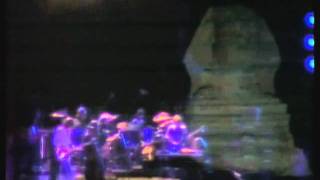 One song from the concert, there are many more online: