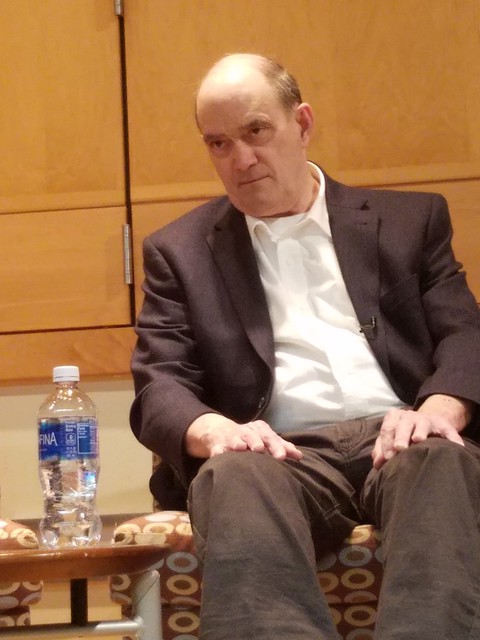 Whistleblower Bill Binney,
(Image by robkall)   Details   DMCA
(Read the notes from the video then watch the video below.)

Pat Robertson: Listen, it's shocking. Its written about it in the Book of Revelation. Could it ever happen? The answer is, unfortunately yes. TOTAL POPULATION CONTROL. Bill Binney says that is what the National Security Agency wants. He should know, he was Technical Director of that agency and worked there for more than 30 years.

Robertson: You've said that the ultimate goal is total population control. In a democracy, that is really scary business.

Binney: Its actually a totalitarian process that has been used down through history. That was the idea behind the Soviet Union, the East German Stasi, and the Gestapo and the SS.

Robertson: (Talking about the NSA surveillance) When I think of this it is just horrible, do they give this information to the IRS?

Binney: That's the other problem. The DEA has a special unit, its primary purpose is to look into the NSA data to find criminality and criminal activity. The members of that are the CIA, the NSA, the FBI, DHS and DEA, and the IRS.

Binney: (About the NSA mapping out the ties anybody has to anybody else) That means they are perjuring themselves in court. I call that a "Planned Program Perjury Policy" run by the department of Justice of the United States.

Robertson: I'm horrified at all of this.

Binney: All of this activity is unconstitutional under the 1st, 4th and 5th amendment.

Robertson: How come some little guy didn't come after you in the middle of the night? . . . What about Snowden, is he a traitor or a hero?

Binney: I look at him as doing an absolute public service, not just for this country but for the world.

Robertson: What kind of megalomaniac would want to do something like this? This is monstrous. The average person does not have a vestige of knowledge of what you are talking about. They just trust their government. What are we going to do!?

Binney: That is really the problem we have in this country. We have not had a dictator in this country since George III for almost 240 years. So we have been very comfortable over those 240 years depending on our government to do the right thing. And that's what we have all been accustomed to them doing; that is, we trust them and have trusted them for a long time. To me I think the only way we can get out of this is to (chuckle) fire everyone in DC.

Robertson: Bill Binney, You're a great patriot. Keep speaking out and ask Prayers for your protection because I can't imagine they will let you keep on talking.

STAY IN THE KNOW
If you've enjoyed this, sign up for our daily or weekly newsletter to get lots of great progressive content.
Series: "Connecting the Dots"