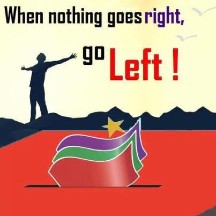 In my February post on The SYRIZA Moment (and in a revision of that piece, forthcoming in Canadian Dimension), I expressed great skepticism about the Syriza leadership's commitment to the radical change the party promised to enact.

I pointed out that the leadership, as represented by Alex Tsipras and Yanis Varoufakis, refuses on principle to have a strategy for "replacing European capitalism with a different, more rational, system." In Varoufakis's own words, they are "tirelessly striv[ing] in favour of schemas the purpose of which is to save" the current "indefensible "anti-democratic, irreversibly neoliberal, highly irrational," European socio-economic system. All this, because, as he understands it, "it is the Left's historical duty"to save European capitalism from itself." Varoufakis's whole negotiating strategy, I suggested, was centered on persuading the masters and mistresses of the Eurozone, through his brilliant "immanent critique" of their own capitalist economic theories, that it would be in their own, and capitalism's, best interest to help Greece restore some semblance of social democracy.

Certainly, the left factions of the party sincerely wanted it to be an "anticapitalist," "class-struggle" formation that would be unlike "any European social democratic party today," and that would have "an agenda of really breaking with neoliberalism and austerity," and the capitalist TINA (There Is No Alternative) consensus. These currents defined Syriza's 40-Point Program and its Thessaloniki Program, upon which it ran for election, and which promised a "National Reconstruction Plan that will replace the [Troika] Memorandum as early as our first days in power, before and regardless of the negotiation outcome."

But even the hopeful left militants recognized that the party leadership, under Tsipras, was increasingly prone to ignore the base, and cultivated a "creative ambiguity" about crucial issues. Tsipras's message to the base was a rejection of illegitimate and unpayable debt, and a radical break with austerity; his message to the Eurozone ruling class was a firm commitment to staying in the Euro and playing by the rules of capitalist finance. The message to the electorate was: We can do both of those things. And if we can't" Well, yes we can!

This was a deeply dishonest deception and self-deception. It was the worst kind of electoral evasion, promoting false hopes that so many wanted to hear, and burying the need to prepare for the inevitable fight that was coming--thus virtually guaranteeing that the fight would be lost.

There was no way Syriza was going to get what it claimed it wanted in the negotiations with the Troika. The neo-liberal elite that had destroyed social democracy was not interested in bringing it back, not a even a bit. And the Eurozone Masters were not interested in hearing a rational critique but in asserting power--class power, as Jack Rasmus has aptly pointed out--and enforcing compliance.

Related Topic(s): Anti-austerity; Austerity; Eurozone; Greece; Syriza; Syriza, Add Tags
Add to My Group(s)
Go To Commenting
The views expressed herein are the sole responsibility of the author and do not necessarily reflect those of this website or its editors.

STAY IN THE KNOW
If you've enjoyed this, sign up for our daily or weekly newsletter to get lots of great progressive content.
Series: "Syriza"