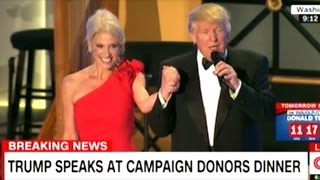 I had a strange thought as I was processing the latest rush of news from the White House: Steve Bannon may be the most honest person in the building. Not likable. Honest.

In other words, he doesn't hide the fact that he's using the unhinged narcissist-in-chief (NIC) for purely personal political reasons. And he doesn't show up in front of microphones to justify or try to explain the logic of the NIC's latest embarrassing breach of protocol, ethics, conduct, law, decent behavior, etc.

There are plenty of others all too willing to do that, including someone I never thought would join the chorus of Trump excusers -- National Security Adviser H.R. McMaster. When he was appointed to the White House job, I thought, "Well good, Trump finally got one right." Like most of the rest of the people watching Trump put together a staff, I figured he had finally named someone who knew what he was doing, had solid principles and the guts to stand up for what he thought was right, including saying when the president was wrong.

Apparently I was wrong. After The Washington Post broke the story that the NIC had divulged highly classified intelligence to Russian diplomats in an Oval Office meeting at which the American press (but not a Russian photographer) was banned, there was McMaster on the White House lawn disputing the story while at the same time seemingly confirming much of it as he tried to find that elusive place for the NIC's behavior known as "appropriate."

The next day, of course, Trump tweeted that he did indeed tell the Russians some classified stuff, but so what, he's the president and he can do so if he chooses. That may well be true, but it doesn't make it right, or smart. McMaster thus became the latest apologist to be thrown under the bus by a man who demands loyalty but exhibits none of it.

But I have no sympathy for him because he surely knew before taking the job how Trump operates. Similarly, I do not feel sorry for Sean Spicer, Kellyanne Conway or others who took jobs as mouthpieces for a demonstrated pathological liar and have lost any credibility or, indeed, dignity they might have felt they had in doing a job professionally by stepping out every day to repeat Trump's lies, defend them with air quotes or describe them as "alternate facts."

If they didn't realize what they were getting into from the campaign, they surely knew it on day one when Trump bragged about the size of his inauguration crowd. Even though government photos showed it to be small, he still sent Spicer out to say it was huge and, instead of resigning, Spicer did as he was told.

He is now a late-night TV joke, as is Conway. So apparently, like a lot of others, they took the job for the money or some perceived personal gain, but not the "honor" of doing public service because there is no honor in hiding in bushes to get your story straight for the press or arguing that the president's own tweets don't say what they say.

Vice President Mike Pence has also shown a casual willingness to defend Trump -- as when he said the NIC fired FBI director James Comey on the recommendation of Deputy Attorney General Rod Rosenstein, not over the FBI probe of Trump-Russia connections only to have the Tweeter contradict him the next day on Rosenstein and the Russians. But Pence, an evangelical Christian who doesn't have dinner alone with any woman except his wife, long ago sold his soul when he left Indiana to be vice president to a man whose life has been, and continues to be, a textbook case of misogyny. Birds of a feather.

You can also throw Reince Priebus in the stew with all the rest who thought having a White House position was something prestigious and influential and something they would be able to point to with pride on their resume -- even though the man they serve is without intellect, integrity or shame and demands that they support his delusions, which they have dutifully done. Sycophants all.

The word is that the NIC may fire some of his White House staff soon. Indeed, he may well have done so before I finished writing this. I do know that a special counsel has been named by Rosenstein to conduct the Trump-Russia connections and that a few Republicans in Congress have apparently decided that the only way to save their jobs is to start investigating Trump and stop defending him.

Yes, it's their sworn duty to do so, but the Republican Party has been a shameless enabler and apologist for Trump from the day he got its nomination. Priebus, as Republican National Committee chairman, led the way on that and got his prestigious White House job as a payoff. Paul Ryan and Mitch McConnell have aided and abetted every step of the way in Congress, relishing the added power and accomplishing nothing. If they ever had any semblance of pride in the work they do and gratitude for being allowed to serve their country -- the kind of things Republicans always talk about -- that has long since been obliterated by their obsequiousness and crass disregard for the people they are supposed to serve. They are cowards, plain and simple.