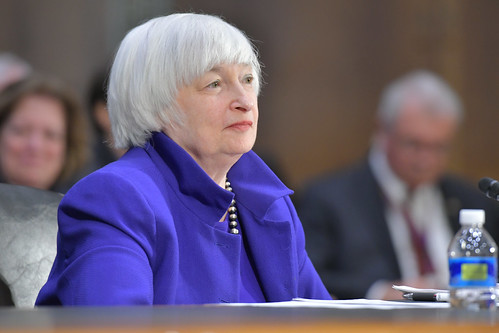 The U.S. economy is weak. Very weak. But the Federal Reserve is planning to raise interest rates anyway. Why?

Here's what's going on: According to the Atlanta Fed the US economy is expected to grow at a respectable 2.8 percent for the first quarter of 2017 That's not bad considering that, for the entire year of 2016, the economy hobbled along at an anemic 1.6 percent. Unfortunately, the Fed's original forecast has been slashed to account for the downturn in the data. According to their current (March 8) calculation, the economy is growing at a meager 1.2 percent. In other words, the already-sluggish and underperforming economy is gradually grinding to a standstill.

This isn't the kind of environment where the Fed typically raises rates. In theory, lower rates create an incentive for borrowing which boosts consumer and business spending which, in turn, increases growth. Conversely, raising rates, however slightly, has a negative impact not only on rate-sensitive sectors of the economy (Re: Housing) but also on stock and bond markets where investors adjust their portfolios to reflect the rising cost of credit.

So why is the Fed raising rates when the economy is crawling along at suboptimal speed and, perhaps, headed for recession?

That question can be answered in two words: Donald Trump.

The Trump Bump has been the biggest post election day rally in Wall Street history. The promise of giant tax cuts, fewer regulations and $1 trillion in fiscal stimulus has sparked a stock-buying frenzy that has added nearly 2,000 points to the Dow Jones Industrial Average while piling up another $3.2 trillion in market capitalization. Wall Street loves Donald Trump, there's no doubt about it.

Regrettably, the unexpected stock-surge has thrown a wrench in the Fed's plan to gradually guide stocks higher avoiding a bond market blowout that could send yields into the nosebleed section wiping out trillions of dollars in equity in the process. The Fed would rather avoid that scenario which is why the FOMC is expected to gradually raise rates to dampen the irrational exuberance that has overtaken Wall Street. So after nearly a decade of flatlining GDP -- accompanied by a stock market rally that lifted the Dow from an abysmal 6,547 points on March 9, 2009 to a lofty 20,906 on March 8, 2017-- the Fed has finally decided to ease on the brakes, remove the punchbowl, and see if it can regain control over the runaway equities-train.

Following Friday's BLS report that 235,000 new jobs were added in February, Goldman Sachs economists predict the Fed will hike rates three times in 2017; in March, June and September. That should stop the Trump surge dead-in-its-tracks. Here's more from the New York Times:

"Employers added 235,000 workers to their payrolls in February, the government reported on Friday, a hefty gain that clears the path for the Federal Reserve to raise its benchmark interest rate when it meets next week.

"The official jobless rate fell to 4.7 percent, from 4.8 percent in January, while average hourly earnings grew by 0.2 percent in a report that overlaps with President Trump's first full month in office.

"'They're ready to go,' said Diane Swonk, founder and chief executive of DS Economics, referring to the central bank's expected vote next week to raise rates from their historically low levels...

"Although the economic anxiety that helped put President Trump into the White House remains, the official jobless rate is near what the central bank considers full employment -- a threshold where, in theory at least, everyone who wants a job at the going rate can find one."

Of course, the booming labor stats do not account for the millions of people who have left the workforce altogether after failing to find a job in Obama's less-than-stellar economic recovery. The data also fails to point out that 95 percent of all the new jobs have been crappy, low-paying, part-time service sector jobs that barely keep food on the table let alone put a roof over one's head. But, whatever.

Fed chairman Janet Yellen sees the uptick in new hires as a vindication of her steady-as-she-goes eight-year zero rate monetary policy that has shifted trillions to the investor class while working people have seen their incomes and wages stagnate, their prospects for retirement dwindle, and their living standards fall. Now Yellen wants to shift gears and gradually raise rates to preemptively dampen the possibility that tighter labor markets will increase wages and, thus, give workers a bigger slice of gains in production. That, of course, is a catastrophe for which the Fed will do everything in its power to avoid. Any sign of higher salaries will be dealt with swiftly and decisively. As de facto representative of the ruling Bank cabal, the Fed would rather prick the massive asset-price bubble it has created and risk sending the financial system into a headlong plunge off a cliff, than allow perennially-strapped workers to garner even a farthing more for their daily drudgery. Class hatred remains the animating force that fuels all Central Bank policy decisions. Here's more from the Times:

Related Topic(s): Economic Stimulus; Inflation; Janet Yellin, Add Tags
Add to My Group(s)
Go To Commenting
The views expressed herein are the sole responsibility of the author and do not necessarily reflect those of this website or its editors.