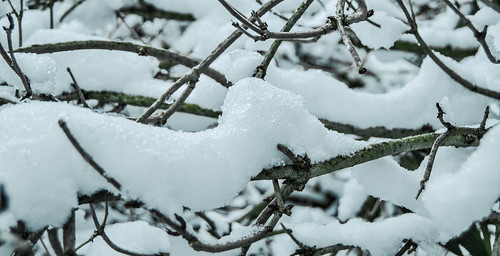 "Few people at this hour - and I refer to the time before the breaking out of this most grim war, which is coming to birth so strangely, as if it did not want to be born - few, I say, these days still enjoy that tranquility which permits one to choose the truth, to abstract one in reflection. Almost all the world is in tumult, is beside itself, and when man is beside himself he loses his most essential attribute: the possibility of meditating, or withdrawing into himself to come to terms with himself and define what it is he believes and what it is that he does not believe; what he truly esteems and what he truly detests. Being beside himself bemuses him, blinds him, forces him to act mechanically in a frenetic somnambulism." Ortega Y Gasset "The Self and the Other"

As I write these words, the house is being buried in a snowstorm. Heavy flakes fall slowly and silently as a contemplative peace muffles the frenetic agitation and speed of a world gone mad. A beautiful gift like this has no price, though there are those who would like to set one, as they do on everything. In my mind's eye I see Boris Pasternak's Yurii Zhivago, sitting in the penumbra of an oil lamp in the snowy night stillness of Varykino, scratching out his poems in a state of inspired possession. Outside the wolves howl. Inside the bedroom, his doomed lover, Lara, and her daughter sleep peacefully. The wolves are always howling.

Then my mind's lamp flickers, and Ignacio Silone's rebel character, Pietro Spina (from the novel Bread and Wine) appears. He is deep into heavy snow as he flees the Italian fascists by hiking into the mountains. There, too, howl the wolves, the omnipresent wolves, as the solitary rebel -- the man who said "No" -- slowly trudges in a meditative silence, disguised as a priest.

Images like these, apparitions of literary characters who never existed outside the imagination, might at first seem eccentric. But they appear to me because they are, like the silent snow that falls outside, evocative reminders of our need to stop the howling media streams long enough to set our minds on essential truths, to think and meditate on our fates - the fate of the earth and our individual fates. To resist the forces of death we need to concentrate, and that requires slow silence in solitude. That is why the world's archetypal arch-enemy, Mr. Death himself, aka Satan, aka Screwtape, advises his disciple Wormwood in C. S. Lewis's The Screwtape Letters to befuddle people against the aberration of logic by keeping them distracted with contradictory, non-stop news reports. He tells him that "Your business is to fix his attention on the stream. Teach him to call it 'real life' and don't let him ask what he means by 'real.' "

It is a commonplace to say that we are being buried in continuous and never-ending information. Yet it is true. We are being snowed by this torrent of indigestible "news," and it's not new, just vastly increased in the last twenty-five years or so.

It is not only information they need -- in the Age of Fact, information often dominates their attention and overwhelms their capacities to assimilate it".What they need"is a quality of mind that will help them to use information and to develop reason in order to achieve lucid summations of what is going on in the world and of what may be happening within themselves".what may be called the sociological imagination.

Today, as we speed down the information superhighway, Mills's words are truer than ever. But how to develop an imagination suffused with reason to arrive at lucid summations? Is it possible now that "the information bomb" (attributed to Einstein) has fallen?

Albert Camus once said that "at any street corner the feeling of absurdity can strike any man in the face." While that is still true today, I would add that the feeling of an agitated and distracted bewilderment is everywhere to be seen as multitudes scan their idiot boxes for the latest revelations. Beeping and peeping, they momentarily quell their nervous anxieties by being informed and simulating proximity through the ether. Permanently busy in their mediated "reality," they watch as streaming data are instantly succeeded by streaming data in acts of digital dementia. For Camus the absurd was a starting point for a freer world of rebellion. For Walter Lippman, the influential journalist and adviser to presidents and potentates, "the bewildered herd" -- his name for regular people, the 99 % -- was a beginning and a wished for end. His elites, the 1 %, would bewilder the herd in order to control them. His wish has come true.

A surfeit of information, fundamental to modern propaganda, prevents people from forming considered judgments. It paralyzes them. Jacques Ellul writes in Propaganda:

Continuous propaganda exceeds the individual's capacity for attention or adaptations. This trait of continuity explains why propaganda can indulge in sudden twists and turns. It is always surprising that the content of propaganda can be so inconsistent that it can approve today what it condemned yesterday.

Wherever you go in the United States these days, you sense a generalized panic and an inability to slow down and focus. Depression, anxiety, hopelessness fill the air. Most people sense that something is seriously wrong, but don't know exactly what. So they rage and rant and scurry along in a frenzy. It seems so huge, so everything, so indescribable. Minds like pointilliste canvases with thousands of data dots and no connections.

Related Topic(s): Attention; Information; Internet; Panic; Snow; Thinking; Time; Truth; Wars, Add Tags
Add to My Group(s)
Go To Commenting
The views expressed herein are the sole responsibility of the author and do not necessarily reflect those of this website or its editors.