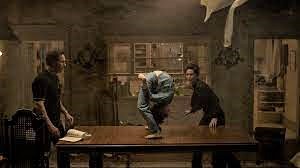 The Conjuring: The Devil Made Me Do It
(Image by Santa Fe Reporter)   Details   DMCA

The Silly Film Olympics Horror Special concludes its thought-numbing analysis of demonic possession with a discussion of two films in The Conjuring universe, The Conjuring (Wan), released in 2013, and The Conjuring: The Devil Made Me Do It (Chavez), released earlier this year. Both emphasize the idea that a cosmic battle between good and evil is real and that salvation is possible only through the Catholic church. (Since you asked, for non-believers, torment on earth followed by an eternity in Hell. Now go to bed.)

The James Wan film follows the actual events fairly closely. The Perrons and their five children move into their new home and immediately begin to experience disturbances: strange sounds, sheets moving, hands clapping, Carolyn's bruises, Cindy sleepwalking and the attack by an "elderly woman." They are desperately in need of spiritual guidance, but, it's worth noting, they don't ask the church. They ask the Warrens. (In the film, Carolyn attends one of their lectures.) Though reluctant, Ed and Lorraine agree to visit the family at their home, where they too sense the presence of malevolent forces. They recommend an exorcism and begin gathering evidence they can present to the church. While their assistant wires the farmhouse with surveillance equipment, they research its history. The property, they discover, was previously owned by none other than the aforementioned Bathsheba Sherman, the murderous, Satan-loving witch. To the Warrens, all the signs of a demonic haunting are falling into place. They hurry back to the farmhouse.

Before Father Gordon can be summoned to perform an exorcism, the situation worsens. Cindy is briefly possessed by one of the "inhuman spirits." Lorraine crashes through a wardrobe floor and lands in a hidden cellar, where the tormented souls of Bathsheba's victims appear to gather. The Warrens help the family take refuge in a motel, but then Carolyn is possessed by the witch herself and drives back to the farmhouse with two of her daughters. Lorraine realizes Bathsheba wants control of Carolyn so she can make her kill her children, and a desperate effort to prevent it ensues. Carolyn tries to stab one of the girls with a pair of scissors and chases April through a tunnel under the floorboards. With a last gasp, Lorraine stretches her hand through a broken board, touches Carolyn's head and gently reminds her of the love she bears for her family. The homily works. As Carolyn transitions back to normal, Ed completes the ritual. The threat has passed. The family is saved. Good triumphs over evil.

Precocious, combustion-able, delusionary. It's tempting to say the film is a long-winded piece of Neo-Catholic sophistry produced by monks who've been living in a cave for 400 years and only recently emerged with a camera and a grudge. In fact, that's exactly what it is.

Here's what is known about the "Harrisburg Haunting." In spite of the two paranormal investigators, an attention-seeking lawyer, nation-wide publicity and enough equipment to surveil a small city, there is still no evidence any supernatural activity ever happened there. No video of anyone levitating or contorting into impossible shapes or having superhuman strength. It's all special effects. In addition, after the Perrons move out, Norma Sutcliffe and her husband buy the property and live there for 32 years (1987-2019). She says they never experienced anything out of the ordinary. No apparitions. No physical attacks. Nothing. The kicker? Not only did the Sutcliffes reside on the property, they operated a daycare for twenty years. They had hundreds of vulnerable little kids romping all over this portal to hell, for two decades, and not one incident. Hmmm. Those demons sure are picky.

It turns out stories about the farmhouse being responsible for horrible tragedies are also false. It's true John Arnold committed suicide, and Edward Arnold and Jarvis Smith froze to death, but their deaths weren't related to the farmhouse in any way. In fact there is no record of "a single suicide or murder," or of "poisonings or throats being slit" inside the Harrisville farmhouse. The filmmakers saw local gossip and colored it real. Perhaps the worst of it is the way the film smears Mrs Sherman. While there's not a lot of information about her, newspaper reports suggest a kindly woman well-respected by her neighbors, with no indication of being anything other than a solid member of her community. The truth? Who cares? The Neo-Catholic propaganda machine needs a villain, so a decent woman is bludgeoned into history as a baby-killing disciple of Satan. Shameful, though not unexpected. Just ask Eve.

The Conjuring: The Devil Made Me Do It (Chaves 2021). The Chaves film is also based on actual events: an exorcism performed in 1980 in Brookfield, Connecticut, and a murder trial that took place in Danbury, Rhode Island in 1981, nicknamed "The Devil Made Me Do It." Eleven year-old David Glatzel was suffering from frightening hallucinations and his worried family finally ask Ed and Lorraine Warren for help. The Warrens conclude the boy is "possessed by more than 40 demons" and petition the Diocese of Bridgeport for an exorcism. The ritual is attended by Ed and Lorraine Warren, David's parents, his brother Carl, his sister Debbie, her boyfriend Arne Johnson and a "priest." It appears to be successful.

Four months later, on 16 February, 1981, Arne Johnson is arrested and charged with the murder of his landlord, Alan Bono. His case gains nation-wide coverage when the Warrens and Johnson's lawyer, Martin Minnella, claim the exorcism and the murder are connected: the same demon that terrorized David Glatzel, once forced out, jumped into Arne Johnson. Ed Warren swears he saw it. Johnson cannot be held responsible for his landlord's murder because he was not in control. The devil made him do it. Once the trial begins, the presiding judge, Robert Callahan, dismisses their defense as a "hobby." On 24 November, 1981, Johnson is convicted of first-degree manslaughter and serves over 4 years in prison.

Chavez's film initially draws on the original story concerning David Glatzel's exorcism and Arne Johnson's murder case. It begins with the ritual, attended by the Warrens, David's parents, his sister Debbie, her boyfriend Arne Johnson and Father Gordon. (The film disappears Carl.) During the cinematic recreation the boy suffers horrible seizures, his voice deepens and his body contorts in physically impossible ways. The demon-led David then jumps on top of Ed Warren and "curses" his heart. Arne Johnson, seeing his friend tormented, demands the demon "fight him" instead. David is subsequently released, while Arne is now a vessel for evil. Later, from his hospital bed, Ed tells Lorraine he saw the demon exit David and enter Arne. Too late. Controlled by the devil, Arne imagines his landlord is a monster sexually assaulting Debbie, grabs a knife and stabs him 22 times. He's arrested and jailed. While in jail, he experiences several terrifying episodes.

It's at this point the film introduces an entirely fabricated story-line. Meet Father Kastner, a priest who is an expert in the occult, and his "daughter," Isla, who also dabbles in the dark arts but who was seduced by the power of evil and is now a practitioner of "Stregherian witchcraft." In their investigation of David's possession, the Warrens find a "witch's totem" in the crawl space under his house. They proceed to find two more, one connected to a mysterious murder / suicide and one in their own home, and they subsequently learn the totem is part of a curse, put there by Isla, the witch. The priest tells Lorraine that a secret altar is the source of her power, and shortly after Isla slits his throat. Desperate to break the curse, the Warrens search a maze of underground tunnels until they find the altar and destroy it. Arne is finally released. Isla is dragged to hell. Once again, good triumphs over evil.

Once again, not a bit of it is true.

David and Carl Glatzel both insist the exorcism business was a "hoax" orchestrated by the Warrens to push Neo-Catholic nonsense. David was never possessed. He was troubled, and the media circus surrounding the exorcism and the trial made it worse. In 2007, David and Carl Glatzel sue Lorraine Warren for damages. The case is eventually tossed, but it signals the seriousness with which the two men view the entire episode. Arne Johnson's secular attorney was in reality a true believer who swore God and Satan are "real," reason enough to question his participation in the con. There was no Father Kastner, no Isla, no totems and no mysterious murder / suicide Lorraine helped to solve. The Conjurjob-ing folks made it up. During the trial, prosecutors point out that Arne Johnson never said a demon was inside him, just that he didn't remember the murder. Little wonder. He and his sisters Wanda and Janice, his girlfriend Debbie, her cousin Mary and Arne's landlord and boss Alan Bono, spent the afternoon drinking at the "Mug 'N' Munch" cafe'. Reports indicate Bono flirted with Mary and insulted Arne, and both men had been drinking. The filmmakers want viewers to believe supernatural forces caused Arne's deadly behavior. Common sense says it was an alcohol-induced pissing contest that ended very badly. No need to bring the silliness in.

Still, horror films are simply the best. Unlike any other genre, they position the audience to experience what Julia Kristeva calls "abjection," or the uneasy confrontation between self and not-self, between subjectivity and death. In those horrifying cinematic moments, we lose touch with physical reality, catapulted out of ourselves, out of our comfort zone. We are made acutely aware of "things fall[ing] apart." Our bodies are open to distortion. Even our skin is suspect; it cannot hold; it too is subject to evisceration. To the knife, the scalpel, the chainsaw. It's wonderfully terrifying, dreadfully sublime. Enjoy it. The jump scares, the swish pans, the unexpected visuals, the frightening filmic techniques. Enjoy it all. But a caveat. Leave the reactionary politics in fantasy land where they belong, especially when watching films that revolve around demonic possession. So many are just low-calorie vehicles for Neo-Catholic propaganda, clever attempts to convince viewers that the church's Iron Age world-view is not only relevant but absolute. It's not.

Related Topic(s): Demonic Possession; God Particle; Movies-Film, Add Tags
Add to My Group(s)
Go To Commenting
The views expressed herein are the sole responsibility of the author and do not necessarily reflect those of this website or its editors.