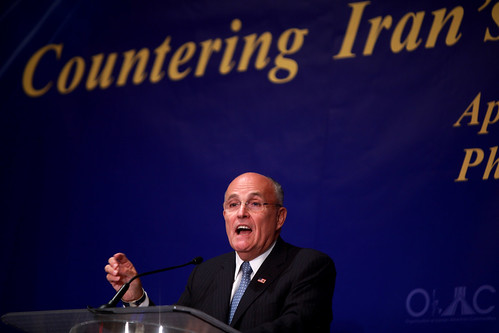 Ha, Rudy, Stop, you're killing me!

In the wake of shootings of and by police and growing protests around the country, it's a good thing we have Rudy Giuliani around to point out a big part of the problem we face collectively as Americans. Clueless people who think that being black is a choice. His recent diatribe on one of the Sunday Morning Pundit Parades is a singular case in point.

He gifted the viewing audience on Sundays' Face The Nation with several sparkling intellectual concepts, like the one about how Blacks need to do more to police themselves. This may be tough for young people, the elderly, or parents, who are relieved to simply get their family inside with the door locked in the evening. Maybe if there were just more superhero costumes to go around?

And while he probably doesn't have any black kids, he still thinks, in simplistic terms, that he knows what Black parents should tell their children. "If I were a black father and I was concerned about the safety of my child, really concerned about it and not in a politically activist sense (as if political action is a parent's main concern), I would say be very respectful to the police, most of them are good, some can be very bad and just be very careful," he said.

He didn't say whether he thought they should add that "This life is going to be tough on you. There will be people in just about any room you walk into that already hate you for no other reason then that's how they were brought up. There will be limited opportunities for decent housing and jobs, and there are police out there who will often shoot first and ask questions later, often with impunity."

"I'd also say be very careful of those kids in the neighborhood, don't get involved with them because son, there's a 99% chance they're going to kill you, not the police." he added. According to Rudy, as long as you can avoid other people you should be ok, especially "those kids", the ones in "that neighborhood", where you live.

He failed to add that while the 'Do things right and everything will work' out meme works somewhat better if you're white, and really only as long as there is someone out there who will eventually say, "Ok, I'll hire you", and that minorities actually live in a substantially different America than he does.

But, really, thanks Rudy. You've helped us learn that as long as there are enough Rudys out there who are unable to recognize that there really is racism in this country, and a disconnect on the part those who have no idea what it's like but still insist on blaming the unfortunate, than movements are in order.

So save your bootstrap suggestions for the country club. You're an old rich white guy. Of course the world seems easy to you. But, someday, try to admit that you can't fully comprehend the lifelong struggle that many minorities face. Admit that those communities are built on decades of systemic stove piping and that crime, while a choice, is also an act of desperation.

And when you think about saying something as silly as asking African Americans to explain "how and what they're doing among themselves about the crime problem in the black community.", think again. It's probably the most inane statement made this century.

Oh, and one other thing. Violence doesn't come from Rap music. Rap music comes from violence, and of the daily lifelong struggles of actual people living in our American cities. Instead of making clueless remarks about it, you should, perhaps, listen to it.

Father of three, (soon starting up 3KC, three kids club), avowed inactivist, talking about a lot of things I'm doing little else about. Writer of everything from fiction to songs but still resisting growing up while trying to learn and grow wiser. (more...)
Related Topic(s): Clueless; Giuliani Rudy; Neighborhood; Rudy Guiliani; Shootings, Add Tags
Add to My Group(s)
Go To Commenting
The views expressed herein are the sole responsibility of the author and do not necessarily reflect those of this website or its editors.