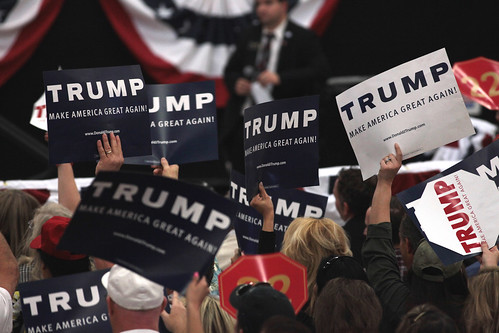 The news that a wide swath of Trump supporters don't understand why some people shun them is not surprising. Many of those supporters go through their days with no awareness of the people around them, not realizing when they've hurt, insulted, or denigrated their neighbors, wives, or co-workers until there is a pushback, then they ask 'what', why, what did I do.

In this case you've taken either a single issue, like abortion or mechanization, or a broad disdain for minorities, or a marked tendency toward isolationism, and turned it into a vote against consumers, the poor, women, endangered species, clean air, clean water, native Americans, other cultures, fairness, truth, facts, the rule of law, thoughtful regulation of things like food safety and guns, as well as global maturity and leadership, and, guess what, now you are being held responsible.

Everybody lost but you won. You 'won' a new war on consumer protections and banking regulations that nearly sank the global economy a short nine years ago. You won a return to assaults on basic human rights for people who had finally realized the right to marry whomever they choose, primarily to satisfy religious doctrine and a need to judge others.

You 'won' regular and routine bashing of any news media that dares to question the administrations version of events. You've won fewer people with healthcare coverage and probably a return to old healthcare rules set by insurance companies.

You've 'won' a return to increased imprisonment of Americans, especially those who can't afford good council, into more and more private prisons, who's only concern is profits.

You've 'won' new attacks on anyone who might be born Muslim or Jewish and a probable return to American soldiers on Islamic lands that is sure to aid recruitment of brand new jihadists. You've won a greater disregard for human life due to a President who sees little reason to avoid nuking enemies, oh, and a looming arms race.

You've won an administration that is going to allow every inside member to pursue their own agendas and you've 'won' a President who sees nothing wrong with spreading falsities, pursuing vendettas, and who has yet to express any inclination to govern on behalf of the three quarters of the country that didn't vote for him. You've won an even greater increase in the wealth gap between the poor, the rich, and the really rich.

You've won an increase in attacks on synagogues, mosques, and other non-Christian peoples. You've won the probable dismantling of the Nations public school system that has educated most of us, and despite a few glaring outliers, continues to do a good job despite having to cover costs inherent in operating within a country where every brick, every desk, and every chalkboard costs more than other countries, just because the suppliers are all Americans who enjoy a higher standard of living than most counterparts in other countries.

You won the right to witness the rape of a nation and a return to all those battles that we thought had finally been resolved. And finally, you 'won' a war against your fellow Americans, that they didn't even know was a vicious fight. Way to go.

Father of three, (soon starting up 3KC, three kids club), avowed inactivist, talking about a lot of things I'm doing little else about. Writer of everything from fiction to songs but still resisting growing up while trying to learn and grow wiser. (more...)
Related Topic(s): Agenda; Consumer; Disregard; Fairness; Healthcare; Jihadists; Law; Muslim; People; People; (more...) Race; Rape; Rape; Recruitment; Soldiers; Truth; Truth; Water, Add Tags  (less...)
Add to My Group(s)
Go To Commenting
The views expressed herein are the sole responsibility of the author and do not necessarily reflect those of this website or its editors.