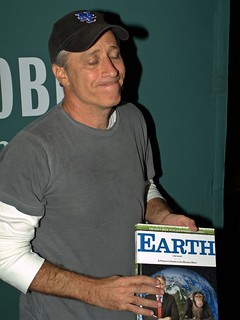 I think I get it. Like many of the fans of The Daily Show I was, at first, somewhat incredulous, I guess, is the best term. For some time I couldn't see what might have been the rationale for leaving. Here you have a show that is not only growing in it's success almost daily but a show that throws a glaring light on the seedier side of our daily lives while catching the attention of politicians everywhere.

I didn't think it was about the toll of taking on so much hypocrisy, hyperbole, and hubris, basically on his own, for so many years, although it may have been a factor. I couldn't imagine watching that much Fox News and not getting weighed down, like someone wearing too many clothes, and cement shoes, in really deep water. But I think it was something else

There has been no shortage of analyses and farewells and in a few of those I'm sure the concept of laughing at the absurdities, and downright lunacy, we see streaming through our media, being at times the only thing keeping us from crying, was covered. But that was only part of what Jon Stewart brought to our living rooms.

What he also brought is possibly part of what drew him away in the end. On many, many , occasions I burst out laughing about a bit, while almost simultaneously thinking "Thank God I'm not the only one who thinks the underlying story is crazy". But maybe fans like me are part of the reason.

When we tune in, to surely get some laughs, maybe we are also thinking "Good, someones watching out for the real villains". Someones watching out for, and loudly pointing at, the truly hypocritical, the really sleazy, as well as the really funny. Maybe that's the problem. Maybe too many of us are playing along with the game we hate knowing that ole Jon has an eye on things. And it's not really as if he was all alone. After some cultivation people like Steven Colbert, John Oliver, Kristen Schaal, John Hodgman, Larry Widmore, Steve Carell, Rob Corddry, Ed Helms and Samantha Bee, took their share at the comedic reigns, and now some of their shows will carry parts of the torch forward.

There were also no small number of politicians to appear on the show and far more who surely listened intently. The President, John McCain, and even Bill O'Reilly were guests on several occasions as well as an endless march of really smart people, really involved people, and big stars.. For a semi nightly show, on a comedy network, it may have garnered what was peraps an inordinate amount of attention. Just scan any standard reading websites for news about what Jon Stewart said and you would always find something. Up till now. But on this hot August night in 2015, what many refer to as an era, ended.

Perhaps Jon decided he had devoted enough of his energies to fighting crime. Maybe he still has the urge to paint or to learn to cook. Or maybe he decided that as long as he was carrying the brunt of the burden the rest of us Americans would sit back in our armchairs thinking "Thank God" and doing nothing to look for our governments and societies absurdities ourselves. Maybe now the news media will be forced to fill the void, a void that has grown almost exponentially in recent years thanks to the ready accesibility of Daily Show Clips.

It's a long shot but at least now people have an idea of how it's done. I only wish I would have tuned in sooner.

Father of three, (soon starting up 3KC, three kids club), avowed inactivist, talking about a lot of things I'm doing little else about. Writer of everything from fiction to songs but still resisting growing up while trying to learn and grow wiser. (more...)
Related Topic(s): Attention; Farewell; Funny; Hubris; Max; Media, Add Tags
Add to My Group(s)
Go To Commenting
The views expressed herein are the sole responsibility of the author and do not necessarily reflect those of this website or its editors.