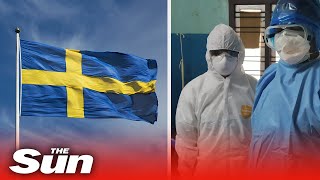 Is Sweden heading to a COVID-19 catastrophe after refusing lockdown?
(Image by YouTube, Channel: The Sun)   Details   DMCA

The "reopenings" underway in 30 states in the US might be in words only just as the ballyhooed "open" Swedish economy is not open in fact and has been closed by non-participation. The Swedish Riksbank reports that attendance at cinema, events, and sports is off 90%. Business at restaurants and cafes is down 70%, and the hotel occupancy rate is a meager 10%. The overall Swedish economy has declined 11% -- more than the current estimate for the US -- and consumer confidence surveys have plunged more in Sweden than in Europe as a whole.

Many elements contribute to a lack of distrust of public health officials and politicians. Among them are the lack of preparation, conflicting statements, the use of the crisis for agendas such as mass vaccination and police state controls, the absence of agreed effective treatment, and hospital deaths from mistreatment. Little is known about the disease, which makes it more scary.

If Swedish behavior is a guide, reopening the economy is not going to result in any quick return to normal. We should begin thinking about the consequences in a country such as the US where personal, business, and government budgets are in deficit.

Related Topic(s): Coronavirus; Government; Health; People; Scary; Us And Sweden, Add Tags
Add to My Group(s)
Go To Commenting
The views expressed herein are the sole responsibility of the author and do not necessarily reflect those of this website or its editors.