In the flurry of new developments -- and disinformation -- it's easy to lose sight of this essential and proven fact. 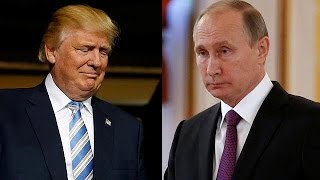 Donald Trump and Vladimir Putin. The shadow of their relationship has overshadowed the entire American election campaign.
(Image by YouTube, Channel: euronews (in Italiano))   Details   DMCA

Michael Cohen heading to jail. Michael Flynn narrowly avoiding a prison sentence -- for now. Paul Manafort stuck in the hoosegow and still tangling with special counsel Robert Mueller. The news of the Trump-Russia scandal these days has focused on the dramatic developments for several top lieutenants in Donald Trump's crew. (And don't forget about Roger Stone!) But whenever there is a rush of new details about one slice or another of this controversy -- or the other pending or possible cases involving the Trump Foundation, the Trump Organization, the Trump inauguration, the Trump family's alleged tax fraud, and more -- it's important for all of us (and the media) to keep the spotlight on a central element that has already been established beyond any doubt: Trump betrayed his fellow Americans.

This Big Story often gets lost in the details and the ever-unfolding developments. Naturally, Trump's alleged role in the campaign finance crimes committed by Cohen has drawn much coverage. (Federal prosecutors stated that Cohen broke the law "at the direction" of Trump: arranging hush-money payments to a porn star and a Playboy model who each alleged a sexual relationship with the president.) And the allegations of the Trump Foundation's illegal activities certainly deserve plenty of headlines. But for more than two years, Trump has kept the paramount point of the Trump-Russia controversy -- Trump's own perfidy -- from being the main theme of the narrative.

Trump's chaff-throwing has prevented core truths of the scandal from shining through, with a big assist from Fox News and "alternative facts" disinformation.

Trump has screamed "No collusion," shrieked "Witch hunt," and screeched "Hoax." He has denied and lied. He has strived to make the public believe that the fundamental question is whether he directly conspired with Vladimir Putin to hack Democratic targets and disseminate the stolen material--contending that anything short of that is no big deal. And he and his minions have cooked up multiple conspiratorial distractions, ridiculously insisting Trump has been the victim of a Deep State plot.

And though recent polling shows most of the public believes the president has been dishonest about the Trump-Russia investigation, he has succeeded to an extent. Given the power of Trump's ultra-bully pulpit, he has been able to win attention for his diversions, no matter how absurd ("Obama wiretapped me!!!"). His chaff-throwing has prevented core truths of the scandal from shining through, with a big assist from Fox News and "alternative facts" disinformation. Trump and his conservative handmaids in politics and right-wing media have done everything they can to prevent a clear-eyed reckoning with what happened in 2016.

Yet recent events make Trump's already obvious treachery even more obvious. And it's necessary for journalists and citizens to make sure this can be discerned through the dust Trump kicks up daily.

Let's step back for a moment and look at the big picture. In late November, Cohen, Trump's onetime lawyer and (lousy) fixer, pleaded guilty to lying to Congress. His lie, Cohen admitted, was designed to help Trump cover up what amounts to a tremendous scandal in its own right: the secret business deal in Moscow that Trump tried to pull off while campaigning for president. After word of this deal emerged last year, Cohen told congressional investigators that Trump's efforts in Moscow had ended in early 2016 (before the bulk of the Republican primaries) and that there had been no contact between Trump's company and the Russian government regarding the project (though Cohen said he'd tried but failed to reach Putin's office to discuss the venture).

All this was false. The efforts to cut a deal continued until at least June 2016 -- all the way through the GOP primaries -- and Cohen did speak with an aide in Putin's office about the project. Cohen's plea highlighted one of Trump's grandest deceits of 2016: Throughout the campaign, Trump insisted he had no connections to Russia. And after the election, he said he had "stayed away" from the country.

The full significance of Trump's deception of the American public has not sufficiently registered. (Has a single Republican leader said boo about it?)

The exact opposite was true. While Trump had pitched himself to voters as an America First candidate who sincerely held positive sentiments regarding Putin, he had pursued a deal in Russia that could have reaped him hundreds of millions of dollars. And he had not shared this salient fact with the public. Nor had he shared that Cohen, on his behalf, had asked Putin's office for help. Needless to say, Trump could not have moved ahead with a major endeavor in Moscow if he had been talking tough about the Kremlin. He was thoroughly compromised as a candidate and hid that from the public during the campaign.

In a non-Trumpified world, revelations of this behind-the-scenes scheming for profit would have set off an enormous political earthquake. After all, this was the most significant conflict of interest in modern American campaign history.

But Trump has changed the rules of what counts as a political scandal. And when the Washington Post revealed details of the project in the summer of 2017, no firestorm ensued. After the first splash, most of the media world moved on, and Republicans in Congress barely took notice.

Cohen's plea last month brought attention back to this secret project -- which could well be called an act of collusion between Trump's company and Putin's office. Still, the full significance of Trump's deception of the American public has not sufficiently registered. (Has a single Republican leader said boo about it? None that I have noticed.)

This episode is a reminder that other proven acts of Trump deceitfulness have not become the dominant and widely-accepted story-lines of the Russia affair. For example, the infamous Trump Tower meeting in June 2016, when Donald Trump Jr., Paul Manafort, and Jared Kushner sat down with a Russian emissary to get dirt on Hillary Clinton. The Trumpsters all say that nothing of use came out of this meeting. But its true import was established before it even occurred: Simply by taking the meeting -- which had been described to Trump aides as part of a covert Russian effort to help them win -- the Trump camp signaled to the Kremlin that it was fine with a clandestine Moscow scheme to assist Trump, and was willing to secretly collaborate with it.

Pause on that for a moment. An American presidential campaign indicated to the Kremlin it would happily conspire with the Russians on secret dirty tricks.

David Corn is  Mother Jones ' Washington bureau chief. For more of his stories,  click here . He's also  on  Twitter  and  Facebook .  RSS  |  TWITTER  David is (more...)
Related Topic(s): Donald Trump Lies; Russiagate; Trump And Putin; Trump Campaign; Trump Dossier; Trump Russia Connection, Add Tags
Add to My Group(s)
Go To Commenting
The views expressed herein are the sole responsibility of the author and do not necessarily reflect those of this website or its editors.