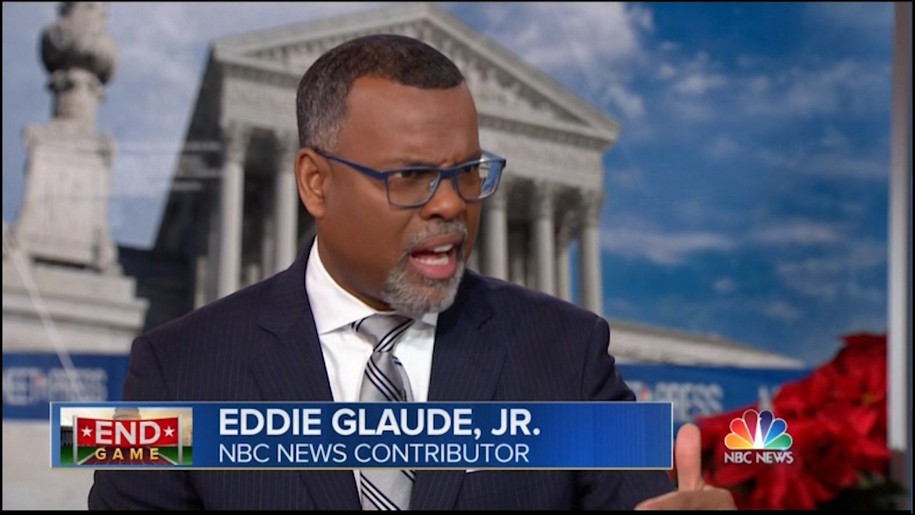 Professor Eddie Glaude Jr. said what needed to be said about the constancy of the "Left" trope. He explains why it's "Same ol' same ol'." He explains the ineptitude of constantly driving to the mythical center using both Obama and Buttigieg.

Chuck Todd pointed out the two competing trends of thought in the Democratic Party.

"Ultimately it is about those in the Democratic Party who say there is a massive change that needs to happen," Todd said. "And those that say you have to get past Trump before you do it."

Princeton Professor Eddie Claude Jr. did not fall for the false choices. He explained in more nuanced words the fraud that has occurred on the American electorate.

"The argument has to proceed on these grounds it seems to me," Professor Glaude said. "Before Trump, we had historical levels of inequality. What was going on before Trump? Black folks were getting murdered in the streets, What was happening before Trump? We had mass incarcerations. So the question, what does it mean to what was before him, as if the country was okay. The fundamentals weren't that. So I think what we need is an agenda for change. Right? And let me say this about Buttigieg and others. Barack Obama's presidency was revolutionary in part because he was a black man. In terms of the policies, it seemed like Third Way Democrats to me. Some people would call him a Clinton Democrat. Buttigieg is presenting himself as a revolutionary candidate in some ways because of identity politics. But when you look at what he is saying, it is just the same ol' same ol' to me."

Princeton Professor Eddie Glaude is becoming not only the intellectual soul of Progressives with the ability to articulate the fraud on America by the establishment in general but an uncanny ability to do it with moral certitude.

Democrats and those who claim to want what is best for all Americans need to learn that the constant attempt to move to the center is a form of disregard for the largest percentage of Americans. They continuously ask these people to accept less as they are rewarded with more or at least made whole. They must understand that this paradigm is only successful because a tack to the middle is always done on the back of the poor and on a large percentage of the middle-class, many misled into believing that at some time they will get theirs after we get ours.

Egberto Willies is a political activist, author, political blogger, radio show host, business owner, software developer, web designer, and mechanical engineer in Kingwood, TX. Egberto is an ardent Liberal that believes tolerance is essential. His favorite phrase is "political involvement should be a requirement for citizenship". He believes that we must get away from the current policies that reward those who simply move money/capital and produce nothing tangible for our society. If a change in policy does not occur, America will be no different than many oligarchic societies where a few are able to accumulate wealth while (more...)
Related Topic(s): Identity Politics; Inequality; Professors; Trump, Add Tags
Add to My Group(s)
Go To Commenting
The views expressed herein are the sole responsibility of the author and do not necessarily reflect those of this website or its editors.