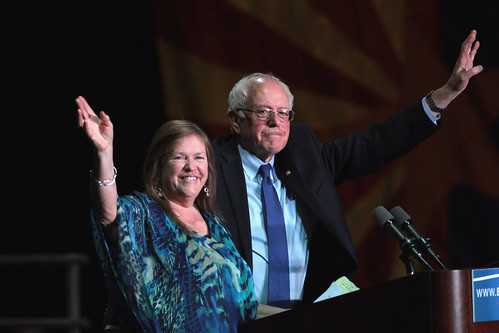 Over 4,000 progressives gathered in Chicago this weekend for the People's Summit. We learned a lot about the base support of Bernie Sanders -- they are still with him, and they are still not happy with the direction of the Democratic Party.

During the keynote address of the three-day conference Bernie said, "The current model and the current strategy of the Democratic Party is an absolute failure."

"The Democratic party needs fundamental change," said Sanders. "What it needs is to open up its doors to working people, and young people, and older people who are prepared to fight for social and economic justice." He added that the party "must understand what side it is on. And that cannot be the side of Wall Street, or the fossil fuel industry, or the drug companies."

Sanders received his loudest applause when he called the Democratic Party model a failure. There were also "Draft Bernie" chants, which refer to an effort to recruit Bernie to form a new party.

When it was over, he gave the microphone back to Rose Ann DeMoro. "I want to say to the Draft Bernie people: I'm with you," she said. DeMoro leads National Nurses United, one of the conveners of the People's Summit.

Bernie and Jane Sanders smiled awkwardly, and DeMoro shrugged. "Heroes aren't made," she said. "They're cornered."

The next morning, Nina Turner took the over 4,000 activists to church. She echoed Bernie's criticism of the current model of the Democratic Party.

The message we have to take from Bernie and Nina is to fight for the future and support the party that follows us! We don't need to follow a political party. The movement must continue to move forward and not wait for Democrats -- if they want our votes they need to open the doors and let us in to lead them to victory.

We have the message and vision that the American people are ready for. Phony Trumpism tapped into the people's desire for some of our vision. They want jobs that allow them to support their families with comfort. They want health care they can afford without going into debt so executives at Blue Cross can get rich. They don't want to go into debt to send their children to college. They want leaders who are working for them and not the billionaire class.

Scott Galindez is a graduate of Syracuse University, a US Army veteran, and currently the Political Director of ReaderSupportedNews.org. Scott's activism began at an anti-nuclear vigil in Lafayette "Peace Park" across from the White House. Scott (more...)
Related Topic(s): Bernie Sanders; Democrats; Peoples Action Party; Tina Turner, Add Tags
Add to My Group(s)
Go To Commenting
The views expressed herein are the sole responsibility of the author and do not necessarily reflect those of this website or its editors.