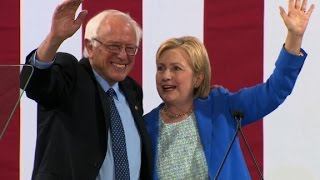 While the corporate media painted a picture of Bernie Sanders riding off into the sunset after throwing his support behind Hillary Clinton, Bernie was rallying his troops for another fight. This time the fight isn't for the Democratic Party nomination, but to transform the party and the country. That was always the focus, but the media only understood the horse race.

Bernie Sanders did endorse Hillary Clinton and pledged to help her beat Donald Trump in November. A few hours later, Bernie was on the phone with his delegates letting them know that there was still work to do and to prepare for a possible floor fight at the convention. Bernie wants to reform the nominating process. End the influence of the party bosses who were exposed in this election. Bernie thinks the super delegates should no longer have the influence over the process that currently have.

Sanders also believes the primaries and caucuses should all be open to all voters. Not allowing independents to vote in the Democratic Primary is exclusionary. Bernie believes by opening up the process the party will grow and will get more support on Election Day. As I have been saying for months, both parties are shrinking while more and more people identify as independent. Open primaries will help the Democrats reach out to those voters.

Senator Sanders also told his delegates he wanted them at the convention for the roll call. He has not released his delegates. He acknowledges the math but wants to come out of Philadelphia united in the struggle for the progressive issues he raised during the campaign. Most of the media failed to report that Bernie did not suspend his campaign. Bernie Sanders is still a candidate for the Democratic nomination for president.

He does not have any delusional plan to steal the nomination from Hillary Clinton. It's no longer about the nomination, and really never was. Of course a win would have been nice and would have accelerated the rate of the political revolution.

Scott Galindez is a graduate of Syracuse University, a US Army veteran, and currently the Political Director of ReaderSupportedNews.org. Scott's activism began at an anti-nuclear vigil in Lafayette "Peace Park" across from the White House. Scott (more...)
Related Topic(s): Bernie Sanders; Bernie Sanders 2016 Presidential Candidate; Campaign Promises; Revolution, Add Tags
Add to My Group(s)
Go To Commenting
The views expressed herein are the sole responsibility of the author and do not necessarily reflect those of this website or its editors.