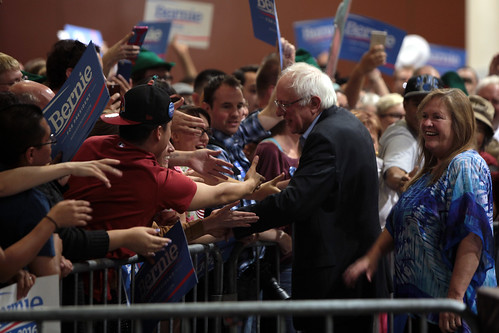 Bernie Sanders is back on the campaign trail, despite having no illusions about becoming the party nominee. Absent an event beyond his control, he knows he will not be the Democratic Party's nominee. Sanders has even said he will vote for Hillary Clinton. He does plan, however, to force open the door of the Democratic Party and lead his movement from the inside to transform the party.

The Democratic Party establishment will have a choice: welcome them and change, or ignore them and watch them leave to form or join another political party. If the Democratic Party wants Bernie Sanders' 13 million voters, they will need to show them that they are prepared to represent their interests.

The party establishment has already shown some resistance to the movement. In St. Louis, there were plenty of 7-6 votes against proposals from the Sanders camp. What they are setting up is a floor fight at the convention on the platform. It can be avoided, when the full platform committee meets in Orlando, if the full committee adopts some of the proposals rejected in St. Louis.

Bernie gave the first of a series of speeches entitled: "Where Do We Go From Here" on Thursday at the Town Hall in New York City. Nina Turner opened with a fiery introduction: "In 1910 President Teddy Roosevelt gave a speech that was titled 'Citizen in a Republic.' In that speech he referred to the man in the arena. He said, 'It's not the critic who counts, not the man who points out how the strong man stumbles, or where the doer of deeds could have done them better. The credit belongs to the man who is actually in the arena whose face is marred by dust and sweat and blood who strives valiantly, who errs and falls short again and again because there is no effort without error and shortcomings, but who he actually strives to be, the doer of the deeds.' I'm here tonight to tell you that we have our very own doer of the deeds. Senator Bernie Sanders is a doer of the deeds. And as he has said, elections come and go but political and social revolutions that attempt to transform society never end."

Scott Galindez is a graduate of Syracuse University, a US Army veteran, and currently the Political Director of ReaderSupportedNews.org. Scott's activism began at an anti-nuclear vigil in Lafayette "Peace Park" across from the White House. Scott (more...)
Related Topic(s): Bernie Sanders; Elections And Campaigns; Politics; Revolution, Add Tags
Add to My Group(s)
Go To Commenting
The views expressed herein are the sole responsibility of the author and do not necessarily reflect those of this website or its editors.