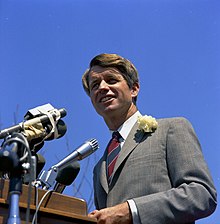 Robert F. Kennedy was he last politician who, because of his vast support across racial and class divides, could have united the country and tamed the power of the CIA to control the narrative that has allowed for the plundering of the world and the country for the wealthy overlords. So they killed him.

"The CIA and the media are part of the same criminal conspiracy," wrote Douglas Valentine in his important book, The CIA As Organized Crime.

This is true. The corporate mainstream media are stenographers for the national security state's ongoing psychological operations aimed at the American people, just as they have done the same for an international audience. We have long been subjected to this "information warfare," whose purpose is to win the hearts and minds of the American people and pacify them into victims of their own complicity, just as it was practiced long ago by the CIA in Vietnam and by The New York Times, CBS ,etc. on the American people then and over the years as the American warfare state waged endless wars, coups, false flag operations, and assassinations at home and abroad.

Another way of putting this is to say for all practical purposes when it comes to matters that bear on important foreign and domestic matters, the CIA and the corporate mainstream media cannot be distinguished.

For those who read and study history, it has long been known that the CIA has placed their operatives throughout every agency of the U.S. government, as explained by Fletcher Prouty in The Secret Team , The CIA and Its Allies in Control of the United States and the World; that CIA officers Cord Myer and Frank Wisner operated secret programs to get some of the most vocal exponents of intellectual freedom among intellectuals, journalists, and writers to be their voices for unfreedom and censorship, as explained by Frances Stonor Saunders in The Cultural Cold War and Joel Whitney in Finks, among others; that Cord Myer was especially focused on and successful in "courting the Compatible Left" since right wingers were already in the Agency's pocket. All this is documented and not disputed. It is shocking only to those who don't do their homework and see what is happening today outside a broad historical context.

With the rise of alternate media and a wide array of dissenting voices on the internet, the establishment felt threatened and went on the defensive. It therefore should come as no surprise that those same elite corporate media are now leading the charge for increased censorship and the denial of free speech to those they deem dangerous, whether that involves wars, rigged elections, foreign coups, COVID-19, vaccinations, or the lies of the corporate media themselves. Having already banned critics from writing in their pages and or talking on their screens, these media giants want to make the quieting of dissenting voices complete.

Just the other day The New York Times had this headline:

Notice the lack of the word alleged before "false virus claims." This is guilt by headline. It is a perfect piece of propaganda posing as reporting, since it accuses Kennedy, a brilliant and honorable man, of falsity and stupidity, thus justifying Instagram's ban, and it is an inducement to further censorship of Mr. Kennedy by Facebook that owns Instagram. That ban should follow soon, as the Times' reporter Jennifer Jett hopes, since she accusingly writes that RFK, Jr. "makes many of the same baseless claims to more than 300,000 followers" at Facebook. Jett made sure her report also went to msn.com and The Boston Globe.

This is one example of the censorship underway with much, much more to follow. What was once done under the cover of omission is now done openly and brazenly, cheered on by those who, in an act of bad faith, claim to be upholders of the First Amendment and the importance of free debate in a democracy. We are quickly slipping into an unreal totalitarian social order.

Which brings me to the recent work of Glenn Greenwald and Matt Taibbi, both of whom have strongly and rightly decried this censorship. As I understand their arguments, they go like this.

First, the corporate media have today divided up the territory and speak only to their own audiences in echo chambers: liberal to liberals (read: the "allegedly" liberal Democratic Party), such as The New York Times, NBC, etc., and conservative to conservatives (read" the "allegedly" conservative Donald Trump), such as Fox News, Breitbart, etc. They have abandoned old school journalism that, despite its shortcomings, involved objectivity and the reporting of disparate facts and perspectives, but within limits. Since the digitization of news, their new business models are geared to these separate audiences since they are highly lucrative choices. It's business driven since electronic media have replaced paper as advertising revenues have shifted and people's ability to focus on complicated issues has diminished drastically. Old school journalism is suffering as a result and thus writers such as Greenwald and Taibbi and Chris Hedges (who interviewed Taibbi and concurs: part one here) have taken their work to the internet to escape such restrictive categories and the accompanying censorship.

Secondly, the great call for censorship is not something the Silicon Valley companies want because they want more people using their media since it means more money for them, but they are being pressured to do it by the traditional old school media, such as The New York Times, who now employ "tattletales and censors," people who are power hungry jerks, to sniff out dissenting voices that they can recommend should be banned. Greenwald says:

They do it in part for power: to ensure nobody but they can control the flow of information. They do it partly for ideology and out of hubris: the belief that their worldview is so indisputably right that all dissent is inherently dangerous 'disinformation.'

Related Topic(s): CIA; Robert F Kennedy; Robert F Kennedy Jr, Add Tags
Add to My Group(s)
Go To Commenting
The views expressed herein are the sole responsibility of the author and do not necessarily reflect those of this website or its editors.