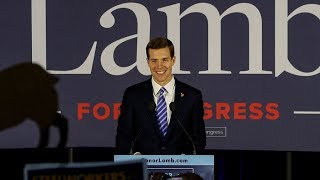 It also triggered an immediate debate about what the victory says about Democratic strategy this fall, amid warnings from the Democratic political pros that efforts to drive a bold progressive agenda will undermine Democratic prospects in conservative districts like Lamb's.

Lamb's remarkable surge in a district that favored Donald Trump by 20 points proves the "Resistance" is real. Republicans outspent Lamb and his allies by a five-to-one margin, and threw their entire playbook at him: Trump, tax cuts, tariffs, attack ads, and more. None of it worked.

With over 100 Republican-held districts more competitive than the one Lamb now represents, the panic in Republican circles is surely justified.

Lost in a Masquerade

Publicly, House Speaker Paul Ryan sought to discount the result by arguing Lamb masqueraded as a conservative. In a somewhat similar vein, some pundits and Democratic party officials suggested Lamb's victory validates the Democratic Congressional Campaign Committee's strategy of finding candidates that "fit their districts," which is often code for recruiting more conservative or corporate Democrats.

While Lamb said he wouldn't vote for Nancy Pelosi to lead the party and was personally pro-gun and opposed to abortion, the notion that he ran as a conservative is fanciful. Jon Favreau, Obama's former speech writer, demolished it in one tweet, noting that Lamb campaigned for universal health care, against Trump's tax cut, for expanded background checks on gun sales, for stronger unions, against cuts to Social Security, for a woman's right to choose and for medical marijuana.

Lamb put voters' kitchen-table concerns at the center of his campaign, and made himself the champion of working people in his district. He railed against House Speaker Paul Ryan for passing tax cuts for the rich and corporations while pushing deep cuts in Social Security and Medicare. He supported Trump's tariffs while campaigning against our failed corporate trade policies. He embraced unions against an opponent who favored right-to-work legislation.

Lamb's campaign was fueled by small donations and a field operation bolstered by unions. The DCCC largely stayed out of the race until late, and it's likely it raised more money off the race than it actually put into it.

There are two major conclusions to be drawn from Lamb's victory in Pennsylvania. First, even in a growing low-unemployment economy, working people are looking for someone who will stand with them. A bold progressive economic agenda beats the Republican attempt to use top-end tax cuts, deregulation and attacks on government to cover their remorseless assault on workers. Even Trump's tariffs and posturing about trade didn't make the difference in this very red district.

Second, the turnout in the race showed once more that Democratic voters are mobilized and energized. Democrats came out in larger numbers than Republicans which usually does not happen in off-year or special elections. Even a massive effort by outside conservative groups could not counter that passion.

As the annual Strategy Summit hosted by the Congressional Progressive Caucus Center in Baltimore last weekend showcased, progressive movements and leaders are gaining capacity and confidence in driving the demand for Democrats to embrace a bold agenda for change. (Full disclosure: I chair the board of the CPCC).

The Congressional Progressive Caucus is the largest and most diverse group in the House. Its members tend to come from strong Democratic districts. They are increasingly united behind a bold populist agenda -- fair trade, $15.00 minimum wage, Medicare for All, expand Social Security, tuition free college, support for worker rights and unions, public investment to rebuild America and drive a Green New Deal.

The summit featured prominent House members who are in the CPC, such as Keith Ellison and Pramila Jayapal, as well as progressive champions like Senator Elizabeth Warren and New York Mayor Bill DiBlasio. Bernie Sanders spoke by video. All called for both mobilizing against Trump and Republicans and for demanding fundamental reform. Warren was saluted for her courage in calling out Democratic Senators who have lined up with the big banks to weaken bank regulation.

Chris Shelton, President of the Communications Workers of America, summarized the progressive commitment most forcefully in his keynote address. "The fight for our country's future," he declared, "starts with The Resistance, standing up every day against the petulant, racist, fascist-coddling, phony populist, pro corporate, lying lunacy that cascades out of 1600 Pennsylvania Avenue on an hour-by-hour basis."

Related Topic(s): Agenda; Congress; Democratic; Energy; Resistance, Add Tags
Add to My Group(s)
Go To Commenting
The views expressed herein are the sole responsibility of the author and do not necessarily reflect those of this website or its editors.