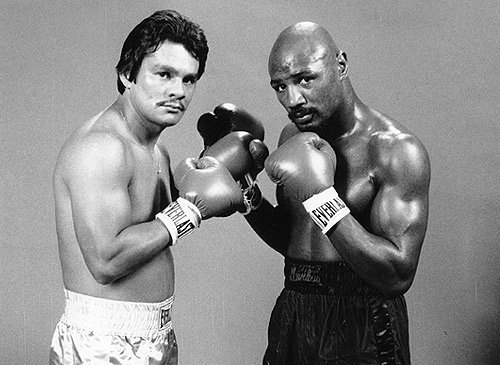 Marvin Hagler, One Of The Greatest

I have been a boxing fan since childhood. I listened to Ingemar Johannsen beat Sugar Ray Robinson, and Cassius Clay (as Muhammad Ali was known then) beat Sonny Liston. I have not watched the Hagler vs. Sugar Ray Leonard fight in years, but I thought Hagler won narrowly (I forget what I scored it).

However, the greatest fight I ever watched Hagler be part of-- and by far the greatest fight I ever saw live on TV (I have only been to one actual live fight in my life) was his first fight against Vito Antuofermo, because it was without any question Vito's greatest fight. Antuofermo, Vito the Mosquito, a man with little technique, an average body, nothing but superb conditioning, good defense, and guts, fighting against a master boxer who was also a knockout specialist, and in as good shape as Antuofermo, though at the end it was Hagler who was perceptibly fatigued.

To even have been standing at the end of his fight with Hagler was a miracle, but Antuofermo won five out of the last seven rounds. He had to win most of the last rounds, he was down 2-5-1 after 8.

At the end that made 7-7-1 Antuofermo on my card. One judge called it for Antuofermo, one for Hagler, and the third called it a draw.

I watched the fight the other day, after at least 10 years since I last pulled it up. I am now tending toward calling Hagler the winner. But it was still one of the three greatest fights I ever watched, and Hagler fought in two of them and won one.

There is probably more nostalgia involved in the fanship of boxing than any other sport I can name. The uniqueness of "the all-time best" in boxing is amplified over the 4 major-league team sports, and even over NASCAR (the 5th American major sport), because the boxer stands alone in the ring, and he (or she, though I have never watched a women's match) either wins or loses completely on his own skill and effort (and conditioning).

When I consider who is or was the very best to put on gloves, I use a standard I learned from Bill James, in his yearly history of baseball. In The Bill James Historical Baseball Abstract, James gives 4 descending definitions for Hall of Famers, past, present and future.

A Definition A Hall of Famer is a player who could reasonably be said to be the greatest of all time at their position. Babe Ruth, Willie Mays, Hank Aaron, Ted Williams, Stan Musial, Yogi Berra, Johnny Bench, Ernie Banks, Christy Mathewson and Lefty Grove would be examples. Definition B would be a player who was one of the greatest at his position, and always the top or co-top star on his team except on rare occasions. Wade Boggs, Willie Stargell, Warren Spahn, Al Kaline, Carlton Fisk, Mike Piazza and Randy Johnson all rate.

There are Definitions C and D.

But we're not talking definition B here. And there is no question that if Marvin Hagler is not THE best middleweight who ever put on gloves, he well fits James' Definition A, a competitor who may reasonably be considered to be the best in his position-- middleweight-- all-time. His opponents list says that much.

Who was the greatest fighter ever? Well, in Baseball, there is little disagreement that Babe Ruth was the greatest baseball player, no matter how great Mantle and Williams and Walter Johnson were. He didn't just set records, he led the advent of power hitting in baseball like no other player did consistently in his entire era, and besides that was an ace pitcher for my Red Sox untill the Yankees got him.

Boxing hasn't got the same kind of figure of over-arching influence. There may be eras of boxing, but the sport remains the same since boxers started to put gloves on (of course, the hockey players still take them off, lol).

A man faces a man, before officially recognized judges of the sport, and tries to knock him out, or hit him more times and/or harder than he gets hit. Nobody pinch-hits for you; there are no relief pitchers in boxing.

Marvin Hagler was one of the very best at this most solo of sports. Muhammad Ali was also. Joe Louis. Sugar Ray Leonard. Rocky Marciano. Floyd Mayweather. George Foreman.

Related Topic(s): Boxing Champions; Marvin Hagler; Sugar Ray Leonard; Vito Antuofermo, Add Tags
Add to My Group(s)
Go To Commenting
The views expressed herein are the sole responsibility of the author and do not necessarily reflect those of this website or its editors.