Click Here to Remove All Ads
Source: The Guardian
Who is actually bringing "injury to America" -- those who are secretly building a massive surveillance system or those who inform citizens that it's being done? 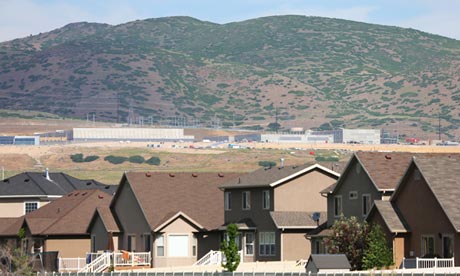 (Image by Unknown Owner)   Details   DMCA
A new NSA data centere sits beyond a residential area in Bluffdale, Utah. It will be the largest of several interconnected data centres spread throughout the US. Photograph: George Frey/Getty Images

The US government has charged Edward Snowden with three felonies, including two under the Espionage Act, the 1917 statute enacted to criminalize dissent against World War I. My priority at the moment is working on our next set of stories, so I just want to briefly note a few points about this.

Prior to Barack Obama's inauguration, there were a grand total of three prosecutions of leakers under the Espionage Act (including the prosecution of Dan Ellsberg by the Nixon DOJ). That's because the statute is so broad that even the US government has largely refrained from using it. But during the Obama presidency, there are now seven such prosecutions: more than double the number under all prior US presidents combined. How can anyone justify that?

For a politician who tried to convince Americans to elect him based on repeated pledges of unprecedented transparency and specific vows to protect "noble" and "patriotic" whistleblowers, is this unparalleled assault on those who enable investigative journalism remotely defensible? Recall that the New Yorker's Jane Mayer said recently that this oppressive climate created by the Obama presidency has brought investigative journalism to a "standstill," while James Goodale, the General Counsel for the New York Times during its battles with the Nixon administration, wrote last month in that paper that "President Obama will surely pass President Richard Nixon as the worst president ever on issues of national security and press freedom." Read what Mayer and Goodale wrote and ask yourself: is the Obama administration's threat to the news-gathering process not a serious crisis at this point?

Few people -- likely including Snowden himself -- would contest that his actions constitute some sort of breach of the law. He made his choice based on basic theories of civil disobedience: that those who control the law have become corrupt, that the law in this case (by concealing the actions of government officials in building this massive spying apparatus in secret) is a tool of injustice, and that he felt compelled to act in violation of it in order to expose these official bad acts and enable debate and reform.

Related Topic(s): Edward Snowden; Espionage; Leaks; Surveillance; Whistleblowers-ing, Add Tags
Add to My Group(s)
Go To Commenting
The views expressed herein are the sole responsibility of the author and do not necessarily reflect those of this website or its editors.