By Cynthia Chung, a lecturer, writer and co-founder and editor of the Rising Tide Foundation (Montreal, Canada). 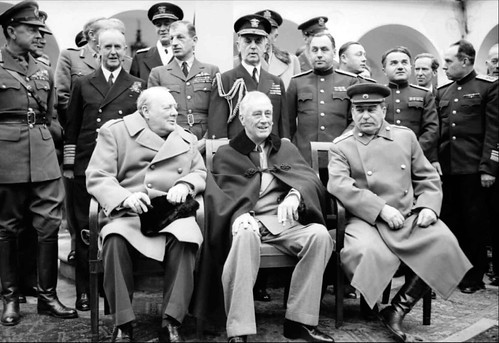 "Madman, thou errest. I say, there is no darkness but ignorance"-- William Shakespeare (Twelfth Night)

There is a very real attempt to rewrite history as we speak. A history that is at the root of what organises our world today, for it is understood that who controls the past, will have control over our present and our future.

This attempt to rewrite history is of the most paramount significance because it is what is used today to shape who we regard as a "friend" and who we regard as a "foe." Thus who controls the "narrative" of history, will also control who we see ourselves "aligned" with.

There is a consequence to this which can only lead to further disunity, to further conflict, to further war. It can only be remedied when the past is finally acknowledged.

There is still time to change this dreadful course.

A Meeting of Minds

The Tehran conference (Nov 28 - Dec 1, 1943) was the first time that Roosevelt and Stalin met in person. It was a historic meeting of the two most important leaders of the Allies that would shape the outcome of WWII.

Roosevelt had been trying to set up a meeting for more than a year, the meeting was of utmost importance because it would allow the two leaders to begin a basis for a solid "trust" to be formed, essential to not only winning the war but for maintaining a stable peace afterwards.

Over four years into WII had passed, and the level of distrust, fear and hatred for the Soviets was still prevalent in the political and military circles within the United States.

This was especially the case within the State Department career officers who were against FDR's recognition of the Soviet Union in 1933, and thus antagonism to him and his policies were pervasive (1). When Harry Hopkins, FDR's closest advisor on foreign policy during WWII, was sent to Europe to check in on the foreign service, he had found many U.S. embassies and legations still displaying the portrait of Herbert Hoover on their walls instead of FDR.

George Keenan, best known as the author of the Cold War strategy of "containment," was among many of similar fibre, who opposed FDR's recognition of the Soviet Union, stating: "We should have no relationship at all with them"Never- neither then nor at any later date- did I consider the Soviet Union a fit ally or associate, actual or potential, for this country."

The Foreign Services' anti-Soviet attitude ran so deep that most were against aid to Russia even after Hitler had invaded, despite the Soviets losing more lives against the Nazis in the first few months than all of Europe combined.

Churchill himself made it no secret that he wanted to make sure Germany would emerge from the war strong enough to counterbalance Russia in Europe (strong" but as he sought to soothingly explain not dangerous).

Related Topic(s): FDR; France; History; Hitler; Nazis; Russia; Stalin, Add Tags
Add to My Group(s)
Go To Commenting
The views expressed herein are the sole responsibility of the author and do not necessarily reflect those of this website or its editors.