Obama is draping the banner of change over the NSA status quo. Bulk surveillance that caused such outrage will remain in place 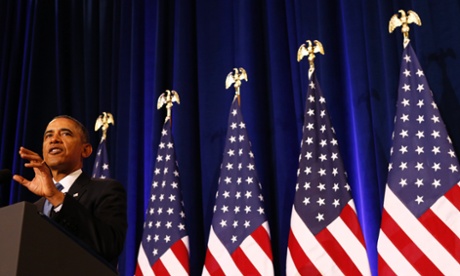 In response to political scandal and public outrage, official Washington repeatedly uses the same well-worn tactic. It is the one that has been hauled out over decades in response to many of America's most significant political scandals. Predictably, it is the same one that shaped President Obama's much-heralded Friday speech to announce his proposals for "reforming" the National Security Agency in the wake of seven months of intense worldwide controversy.

The crux of this tactic is that US political leaders pretend to validate and even channel public anger by acknowledging that there are "serious questions that have been raised." They vow changes to fix the system and ensure these problems never happen again. And they then set out, with their actions, to do exactly the opposite: to make the system prettier and more politically palatable with empty, cosmetic "reforms" so as to placate public anger while leaving the system fundamentally unchanged, even more immune than before to serious challenge.

This scam has been so frequently used that it is now easily recognizable. In the mid-1970s, the Senate uncovered surveillance abuses that had been ongoing for decades, generating widespread public fury. In response, the US Congress enacted a new law (FISA) which featured two primary "safeguards": a requirement of judicial review for any domestic surveillance, and newly created committees to ensure legal compliance by the intelligence community.

But the new court was designed to ensure that all of the government's requests were approved: it met in secret, only the government's lawyers could attend, it was staffed with the most pro-government judges, and it was even housed in the executive branch. As planned, the court over the next 30 years virtually never said no to the government.

Identically, the most devoted and slavish loyalists of the National Security State were repeatedly installed as the committee's heads, currently in the form of NSA cheerleaders Democrat Dianne Feinstein in the Senate and Republican Mike Rogers in the House. As the New Yorker's Ryan Lizza put it in a December 2013 article on the joke of Congressional oversight, the committees "more often treat ... senior intelligence officials like matinee idols."

As a result, the committees, ostensibly intended to serve an overseer function, have far more often acted as the NSA's in-house PR firm. The heralded mid-1970s reforms did more to make Americans believe there was reform than actually providing any, thus shielding it from real reforms.

The same thing happened after the New York Times, in 2005, revealed that the NSA under Bush had been eavesdropping on Americans for years without the warrants required by criminal law. The US political class loudly claimed that they would resolve the problems that led to that scandal. Instead, they did the opposite: in 2008, a bipartisan Congress, with the support of then-Senator Barack Obama, enacted  a new FISA law that legalized the bulk of the once-illegal Bush program, including allowing warrantless eavesdropping on hundreds of millions of foreign nationals and large numbers of Americans as well.

This was also the same tactic used in the wake of the 2008 financial crises. Politicians dutifully read from the script that blamed unregulated Wall Street excesses and angrily vowed to rein them in. They then enacted legislation that left the bankers almost entirely unscathed, and which made the "too-big-to-fail" problem that spawned the crises worse than ever.

And now we have the spectacle of President Obama reciting paeans to the values of individual privacy and the pressing need for NSA safeguards. "Individual freedom is the wellspring of human progress," he gushed with an impressively straight face. "One thing I'm certain of, this debate will make us stronger," he pronounced, while still seeking to imprison for decades the whistleblower who enabled that debate. The bottom line, he said, is this: "I believe we need a new approach."

But those pretty rhetorical flourishes were accompanied by a series of plainly cosmetic "reforms." By design, those proposals will do little more than maintain rigidly in place the very bulk surveillance systems that have sparked such controversy and anger.

To be sure, there were several proposals from Obama that are positive steps. A public advocate in the FISA court, a loosening of "gag orders" for national security letters, removing metadata control from the NSA, stricter standards for accessing metadata, and narrower authorizations for spying on friendly foreign leaders (but not, of course, their populations) can all have some marginal benefits. But even there, Obama's speech was so bereft of specifics -- what will the new standards be? who will now control Americans' metadata? -- that they are more like slogans than serious proposals.

Ultimately, the radical essence of the NSA -- a system of suspicion-less spying aimed at hundreds of millions of people in the US and around the world -- will fully endure even if all of Obama's proposals are adopted. That's because Obama never hid the real purpose of this process. It is, he and his officials repeatedly acknowledged, "to restore public confidence" in the NSA. In other words, the goal isn't to truly reform the agency; it is deceive people into believing it has been so that they no longer fear it or are angry about it.

As the ACLU's executive director Anthony Romero said after the speech:

"The president should end -- not mend -- the government's collection and retention of all law-abiding Americans' data. When the government collects and stores every American's phone call data, it is engaging in a textbook example of an 'unreasonable search' that violates the constitution."

Related Topic(s): FISA; NSA; Obama Cover-up; Obama Effect; Surveillance, Add Tags
Add to My Group(s)
Go To Commenting
The views expressed herein are the sole responsibility of the author and do not necessarily reflect those of this website or its editors.